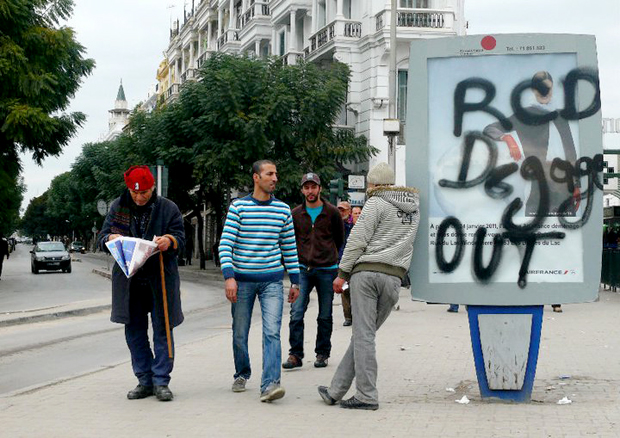 Ben Ali is gone, but the regime is still there. This interim government must be purged of the old regime’s men. This is why I think we should not trust this government:

1. Mr Ghannouchi’s government did not unequivocally state that they will make every possible effort to get Ben Ali extradited to face justice in Tunisia. Mr Ghannouchi was still in contact with him after he left and there are credible rumours that the prime minister even mediated to get the dictator asylum.

2. This interim government is yet to send a full list of names for the Ben Ali – Trabelsi clans so that their accounts in foreign banks are frozen. Switzerland had to identify its own list of suspect accounts. France and other countries have taken preemptive measures but not based on an exact list from the Tunisian government. Even if this measure is finally taken by the government, the lack of urgency in dealing with this issue and the lack of transparency concerning who from the clan was arrested dealt Mr Ghannouchi’s government a huge credibility blow in the eyes of the public.

3. National TV does not look very free to me. Some people seem to be still pulling the strings and controlling the agenda of most programs. One example, early news programs reporting the demonstration which started in Sidi Bouzid and headed for Tunis to bring down the government said that their demands were “political and social” refusing to be any more explicit. They only admitted the specific demands later when it was clear the size of the demonstration was growing and it was turning into an open ended sit-in in the Kasbah. In so called round-tables, I very rarely see guests calling for the old regime’s men to go. I also rarely see guests representing parties who have been outspoken against the interim government, such as Marzouki’s CPR party and others.

4. The ministers who served under the old regime seem to be clinging to their positions at any cost. Their argument is continuity. This is laughable. Continutity can be assured by them making themselves available to an independent transition government whenever they are needed. Logistically, they can even work side by side but leaving the decision making power in the hands of the independents. Besides, we all now that continuity is guaranteed by the high-level and mid-level civil servants working under the minister, and not by the minister himself. This is why former Presidents H. Bourguiba as well as Z. A. Ben Ali moved their reliable men between the ministries of Sports, Information, Tourism, etc. regardless of their academic and professional experience. The position of a minister is a political one, tasked with drafting policies and long-term strategies and communicating with the public and other institutions at a political level. He or she is not tasked directly with operational day to day issues, which are usually delegated and are not reviewed on a daily basis.

5. Reports from patriotic Tunisians in various ministries and courts that critical documents are being destroyed. These documents are the only way to indict those who collaborated with the mafia of the old regime. A big clean-up is undergoing right now in the various “important” ministries and institutions. This cleanup is as widespread as the spread of the corruption under the old regime, where a big “royal clan” and their collaborators in the system were above the law for over a decade. This cleanup includes also the Ministry of Interior, where efforts are probably focusing on reducing as much as possible all evidence of torture and other serious abuses. There are even those who speculate that the burning of some prisons early on after the dictator fled was an attempt to get rid of the biggest piece of evidence, the prisoners who were tortured themselves. This morbid theory, while I hope is wrong, is a reflection in any case of the little trust the population has in this current caretaker government.

It is urgent that we get our economy back on track as soon as possible and start the rebuilding process. It is also urgent that we focus on the short-term basic needs of vulnerable people especially, many of whom lost their livelihoods in the disturbances which broke out after the dictator fled. This will only happen if people get an interim government that they accept and trust. The Tunisian people are very aware that democracy requires institutions and free and fair elections, and these cannot emerge out of a government that served under a dictator for two decades. Life does not emerge out of the dead. Only God can do that. The interim government must be formed of independents who have real credibility, personalities from academia and civil society who demonstrated their passionate belief in the values of freedom and democracy. Mr Ghannouchi must yield to popular demand for the country’s sake. We cannot change the population, so his government ought to go.