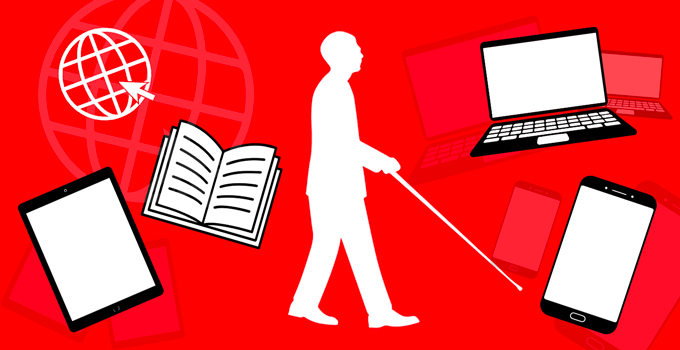 Gabsi forged his threefold identity by pushing barriers and trying to get the best out of any situation, no matter how complex. Like most blind students in public high schools or specialized institutions, he had no other choice than studying the arts. “There is like a tradition, a strong custom that the blind study arts. It is a fact,” Gabsi said. The reasons for this tradition include the non-inclusiveness of education in the primary and secondary levels, the shortage of educational tools and the lack of qualified teachers.

The Search for Open Format Books

And so, though his brain was fizzing with ideas for apps, he focused on literature and managed to get his baccalaureate diploma in 2014. The high school graduate then found himself on a large university campus where the disabled and non-disabled rubbed shoulders. There were few other disabled students on campus then, and when he recalls those days, he remembers himself initially as a lonely boy.

But over time, people got to know me and the door started to open. They [the other blind students in the Sahel region] thought that if I went to university, they too could come. I think there are more than 20 blind students now at Sousse campus,

But enrolling in higher education is just one part of the challenge. Another is getting the specialized resources disabled students need. Gabsi could not find a single paper book in Braille in his campus library when he started college. His French language specialization opened up some resources for him, as he reports that “there are not much scientific resources in Arabic.”

French-language resources have allowed Gabsi to keep up-to-date with computer and science developments. But his own struggle to find resources tailored for his lack of eyesight has driven him to try and change the situation for others with special needs. Thus, besides studying syntax and grammar, Gabsi has been researching the latest apps and software that could make internet more accessible to others who are also disabled.

“Blind students have been coming to me asking for advice on how to access the knowledge available online, so I started to share my resources,” he said. He added that he felt as if he had a calling: making books and internet more accessible to students like him.

So, alongside with his friend Hatem Akermi, a young physiotherapist who is also blind, Gabsi decided to make use of social media. They created a Facebook group, “Les forums du non-voyant tunisien” [The Forums of Visually Impaired Tunisians] and a Youtube channel: “Science Tek” where blind youth can meet, have fun and join the conversation on the latest developments related to Internet accessibility.

The two young men then joined Ibsar, a Tunisian NGO advocating for the rights of the blind, in its project to produce books in open format, mainly in EPUB3 format.

As defined by the Accessible Books Consortium (ABC), EPUB3 is considered the “gold standard” in the publishing industry for the production of accessible digital books. It allows the creation of an electronic file that can then be used to produce digital books in various formats, such as audiobooks (with a human or a synthesized voice), embossed Braille or electronic Braille.

Accessibility: an Expensive and Cross-border Right

Since 2019, with the support of the World Intellectual Property Organization (WIPO), Ibsar has converted almost 170 Arabic books in EPUB3 format, according to its president, Mohamed Mansouri. Ibsar has thus contributed to the international catalog of books that was created thanks to the Marrakesh Treaty to Facilitate Access to Published Works for Persons Who Are Blind, Visually Impaired, or Otherwise Print Disabled.

According to the WIPO, the Marrakesh Treaty “makes the production and international transfer of specially-adapted books for people with blindness or visual impairments easier. It does this by establishing a set of limitations and exceptions to traditional copyright law.” Tunisia was the first Arab country to ratify this treaty in 2016. Populous Arab countries like Egypt and Algeria do not appear in the list of the 81 contracting parties. As for developed countries that monopolize scientific research and books’ publication and strictly protect their productions by strong copyright laws, they seem reluctant to join the treaty. While France, Germany and Belgium have yet to ratify it, the United States and the United Kingdom did not approve the treaty until 2020. As reported by Intellectual Property Watch, “the road to adoption of the Marrakesh Treaty was a strenuous one and met vigorous resistance from some developed countries.”

According to this non-profit, independent news service that covers global policymaking on intellectual property and innovation, “one of the reasons for resistance was that such treaty would open the door to further exceptions and limitations, undermining the whole international copyright system”.

Mansouri said he recognizes thus the importance for Tunisia of having ratified the Marrakesh Treaty, but he thinks that much remains to be done. “We ask that the authorities, including the Ministry of Culture, issue the regulatory texts that will help implement the treaty,” he told Meshkal/Nawaat. “These regulations would facilitate the process of conversion of books to open format and ensure easy transfer across borders,” he added.

In the meantime, Ibsar continues to convert books and publications important for public affairs, such as laws, international treaties or the constitution, into more accessible formats. “The hardest part is converting the book to Word format first. A 300-page paper book can cost up to 1000 dinars. Afterwards, thanks to the technology, the creation of the EPUB3 file is quite easy and costs around 200 or 300 dinars,” explained Ibsar’s president.

But the EPUB3 format is just one step in the long road to digital accessibility. “In fact, to read an ebook, you need a screen reader to be installed to your computer. But a screen reader is too expensive; it costs around 1800 dinars”, said Akermi. At a cost of nearly five times a monthly minimum wage, a screen reader is a heavy financial burden for students and their families.

Despite their crucial role, these assistive reading devices are not available on the local market and the CNAM—the public health insurance fun—does not cover the cost,

Online accessibility is further hindered by Tunisian laws. Without an international online payment system, such as Paypal, blind Tunisians cannot download paid applications that allow them to surf the web effortlessly on their smartphones.

“A Threshold not a Ceiling”

Chapter two of Tunisia’s 2014 constitution on rights and freedoms is one of only two chapters that were not suspended by President Kais Saied’s presidential order 117 on September 22, 2021. That chapter expressly guarantees the rights of disabled citizens through article 48, which states: “The State shall protect persons with disabilities from all forms of discrimination. Every disabled citizen shall have the right to benefit, according to the nature of the disability, from all measures that will ensure their full integration into society, and the State shall take all necessary measures to achieve this.”

Invited last month by Ibsar to lecture its members on the right to access to information, Khaled Mejri, assistant professor of public law at the Faculty of Legal, Political and Social Sciences in Tunis, stressed the importance of Article 48 and its effects on the daily life of disabled people.

This is an article which, like in mathematics, can be read as a factor of all other articles relating to rights and freedoms such as the right to health, the right to work, the right to education or the right to decent housing. The article in fact encompasses all the other rights mentioned,

An “obligation of means” denotes that the State makes an effort to fulfill its duty. In other words, it promises to do its best without necessarily providing any result. On the other hand, in case of an “obligation of result”, the State does not only do its best to ensure that the desired result is achieved. It must deliver the expected result.

In the case of disability, the State’s obligation requires appropriate measures be taken to make sure that the rights are fulfilled. Otherwise, the principle of equality and nondiscrimination between all citizens will be undermined. “The State cannot say it does not have the resources to guarantee access to information for all. It cannot say it empowered all the citizens but it is working on empowering the disabled”, he said.

The law professor criticized the official discourse that often presents “international norms as an ambition”. For him, it’s the State’s duty to enact the constitution’s provisions and honor Tunisia’s international engagements such as the Marrakesh Treaty or the International Convention on the Rights of Persons with Disabilities (CRDP).

And this is the bare minimum. It is a threshold not a ceiling,

This bare minimum of digital accessibility could change the life of thousands of blind youth who, just like Gabsi, want to pursue new paths of study in fields like technology, economics or pure science.

“There is no law that prevents blind students from joining other branches” of study, Mansouri told Meshkal/Nawaat. “But if online knowledge of all kinds will be more accessible, students will pursue their passions and ambitions regardless of their disabilities.”

This article was produced as part of a reporting partnership between Meshkal and Nawaat.