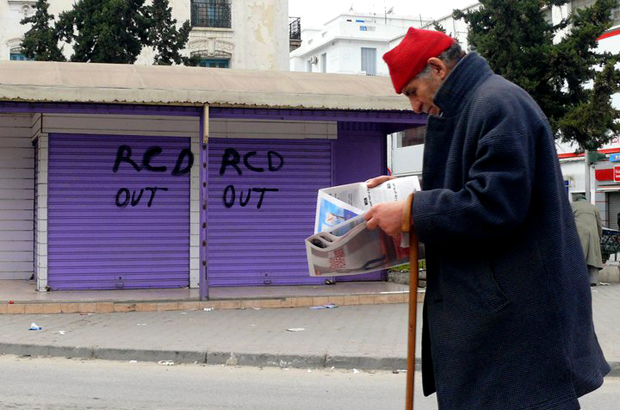 Calls are mounting for disbanding the Rassemblement constitutionnel démocratique (RCD) or at least banning it from participation in the transition government of Tunisia. Amid streets chants of “RCD out”, the RCD leadership (such that it still exists) first kept a low profile, then felt compelled to do “something”. That something translated into a resignation of the president and the prime minister from the RCD and the expulsion of the ousted president and some of his family members.

What to do with the RCD is a serious headache for Tunisia’s nascent democracy. The RCD ruled Tunisia and dominated the political, social, and economic life of all Tunisians for decades. But now Tunisians are saying that enough is enough.

The old regime’s propaganda always claimed that the RCD was the people’s party. They said the RCD took its legitimacy from the struggle to free Tunisia from French colonization. Over the years, it was said, it attracted people from all walks of life. The RCD leadership claims that it now has more than two million members.

However, since the fall of Bourguiba, this claimed historic legitimacy has been in doubt. Clearly, the RCD played a decisive role in the movement for liberation from French colonial rule in 1956. But claims that the RCD was the only voice on the Tunisian political scene before and especially after 1956 are highly dubious.

The claim of two million supporters is no more than cheap propaganda that fails to fool Tunisians and non-Tunisians alike. It is unthinkable for a country of 10 million to have such a disproportionate number of supporters in one party while all the other parties, legal and illegal combined, do not even have one-tenth as many supporters. Even if that number were true it would attest merely to the unhealthy nature of the Tunisian political environment. Moreover, many Tunisians relate stories of harassment, intimidation, and threats that landed them with an RCD supporter card. Although I have heard rumors that there exist true RCD believers who completely support party policy, I have yet to meet one of them in person.

For democracy to go forward in Tunisia, the RCD must go

It is hard to decipher the RCD strategy for the day after January 15th. It has lost its leadership and it is facing mounting anger yet the party has kept a remarkably low profile and an inexplicable silence. It did not come out and openly support the popular movement, nor did it unequivocally express regrets for its 23 years of mistakes and mismanagement. So why is the RCD so utterly defiant?

The answer in my view is that the RCD still thinks it can survive through this difficult time and that it is still in charge of political life and popular destiny through its continued presence in the executive branch, albeit in the short term.

The government so far in the person of the president and the prime minister has been always one step behind what the people want. They seem to budge or make concessions only when forced to.

One cannot but question why it is that the current government stubbornly refuses to take a clear position on the fate of the RCD. In my opinion, by fostering fear and ignoring calls for the dissolution of the RCD, the government is showing that it has a hidden agenda: preserving the RCD.

Calls of “RCD out” are not heard

In response to calls for dissolving the RCD the government’s action has so far been merely cosmetic: the current president and prime minister have resigned from the RCD and the ousted president and some of his family members have been expelled. These actions have failed to appease street anger and are of questionable legality. It is far from clear who has the authority to exclude anybody from the RCD and to whom the president and prime minister would have presented their resignation. One has to wonder whether they presented it to Ben Ali himself.

Warnings of a state of vacuum and even the possibility of the army taking charge are advanced here and there by analysts, politicians and ordinary people. The current government did not shy away from using fear-inspired arguments to defend the composition of the unity government. Although the government does not openly link keeping the RCD to the stability and security of the country this is implied by its refusal so far to address the issue. Tunisians have been repeatedly reminded of the Iraqi example: the old Iraqi regime was toppled, the Ba’ath party banned, and chaos ensued – and continues to this day.

However, the comparison of the Tunisian situation to the Iraqi situation is erroneous. First of all the Ba’ath party, unlike the RCD, was, and remains, a party with a clear ideology. Moreover, unlike Tunisia, Iraq was under occupation and not only the Ba’ath party was dismantled but also the army and the police.

The fear-mongering strategy so far seems not to have daunted the Tunisian street. It remains to be seen what the transition government will do next. One thing, however, is clear: whether or not the current government has a hidden agenda, its silence and failure to address the RCD issue head-on speaks volumes. It has run out of ideas and is simply playing for time.