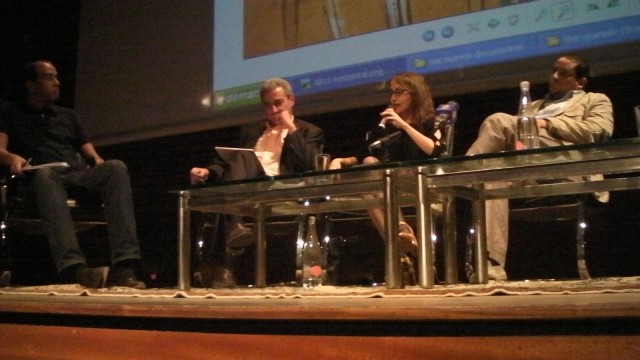 Some background: Tunisia is preparing to write its constitution, and both political parties and independent “lists” (made up of groups of candidates) are vying to be part of the constitutional assembly. Everyone on this panel is either running themselves, or working with the various constituents to ensure diverse representation.

Riadh Guerfali begins: “Our objectives as bloggers included changing the world around us, pushing for democratic institutions…With these new opportunities, our values are the same, and can be supported from different angles and perspectives,” says Riadh Guerfali, opening the panel. The elections will not change everything, says Guerfali, noting that their fight will continue. “We’re working heavily with the Internet, trying to make Internet access a right for every Tunisian citizen; we must also find a solution to censorship of the Internet,” he says. “Now we can see why a blogger, doing this work, is a citizen above everything else.”

Khadraoui then turns to Amira Yahyaoui: “On your website, you define yourself as being devoted to bringing down Ben Ali. Now how do you see your role?”

“For me, it’s important to have a constitution for citizens, not for political parties,” she concludes. “I am running for this office particularly for that reason; when the campaign started, I decided to run, late compared to some other independent candidates. We wanted to wait and see what other parties were presenting…we looked at their programs. To answer your question quickly: ‘Do we, people of the Internet, have a position?’ My experience was that I hated having a blog; I felt that the Internet space, and free expression was an easier struggle than what was happening on the street. We don’t just live in the Internet, we want to live in our country.”

Malek then turns to Tarek Kahlaoui: “In your blog you’ve always been involved in politics; why did you choose an independent list rather than join a party?”

Tarek Kahlaoui: “We used to only know each other through Skype; this is the first time I’m meeting Amira face-to-face. I’m happy to be here. This would not have happened without the political developments that took place in Tunisia, and that had an impact on everyone. From the social science perspective, we need time to understand if there are really any political parties in Tunisia; the parties that were being constructed under the Ben Ali regime could only be shaped after the revolution, based on polls. Most of these parties only drafted their programs in the last few months. These parties are still being built, are still young and taking their first steps. The rest of the political scene is still dazzled and taken aback by what has happened. Nobody expected the revolution, not even the most optimistic among us expected it to happen so fast.”

“This sense of bewilderment has stalled our thinking,” Kahlaoui says. “I have lots of colleagues who struggled in political parties, which is why I’m not a part of it. When I look at these parties, I can’t deal with the idea of taking a top party position; I would consider it disrespectful to those parties to take such a position, and when I look at people who weren’t involved in politics or were on the side of regime but have now become revolutionaries, out of respect for these old parties, I feel that I need more time before I can join one. All the parties lack the ripeness or maturity for me to join them. That’s the brief answer.”

Malek then turns to Mehdi Lamloum: “You are one of the most well-known bloggers; you didn’t deal much with politics but you had some reach within a particular circle of networks. How did a blogger like you, who was not political, turn out to run for the constitutional council?”

Mehdi Lamloum: “I’m still not talking about politics on my blog. When we got to the point of having to run for the council, I had no chance of making the list. I started to give up, but with the demonstration on the 15th of August (where ‘some people had cake and others had police batons’), I had to look for a place to play my role and felt that I had to be independent, and so I joined Youssef Seddik‘s list.”

“It’s very difficult for one list to ensure three seats,” says Lamloum, “But I wanted to prove to the people who knew me that my being with this philosopher is not empty of meaning. I felt that, as a blogger and citizen, I could help this list get to the constitutional assembly.”

Malek turns to Slim Amamou: “Can you see the difficulties facing the independent lists now?”

“There are four or five parties running in the same district; if one or two of these parties picks up the seats, independents will have no chance,” explains Amamou, “I’m trying to explain why Mehdi says he has no chance of going to the assembly. The election law is set up so that only the top list makes the assembly. If a second list makes it, it will only be after the remaining votes are compiled.”

Malek asks the group: “How did you each come to the conclusion to run? And what difficulties are you facing in your campaign?”

Amira Yahyaoui: “We were not afraid of Ben Ali, why would be afraid of the parties? We knew what to expect, in terms of difficulties, particularly material ones. My list, for example, has no money. Our main difficulty is financial; the second is that we get no media coverage. Our campaign is basically run on the Internet.”

Malek turns to Riadh Guerfali, who is running in Bizerte, and whose party name means “Evacuation”: “How will you work to make contact with those who will be voting for you?”

Riadh Guerfali: “We have to have a campaign, but it is difficult – the first is that it’s difficult to get started on the campaign, the second difficulty came later: For a long time I was wondering whether I should run or not, start a campaign or not…Just starting from the activities that we undertake on Nawaat. Though my candidacy has nothing to do with Nawaat, my platform does. My question was: ‘Can I be more effective if I run for the constitutional assembly?’ I then decided that it was worth it, and began engaging in the election ‘battle,’ as it were. It’s difficult for independents because we don’t have the logistics of the political parties that are represented in every town and region, so we have to work. We have to be active on the Internet, but that’s not enough. I hope that we will achieve something, especially as Amira has said, I think that for the independents, there is some confidence because we’re not playing the political games of the parties. The most difficult thing then for the independents–as our friends in Egypt will also experience–is that the media is giving plenty of time to the parties and is ignoring the independents, despite the fact that 45% of the lists are independent.”

Tarek Kahlaoui, who is running in Ben Arouss says that “There’s a lot of trade union activity there, so the parties closer to the left will get more votes. It’s very difficult to run a campaign against these well-established parties. And if you don’t have young people at the head of the lists, these parties won’t be trying to get young people to the assembly. The revolution was a revolution of youth, and yet the parties aren’t working to get young people to the front. The one way that will get you somewhere is direct contact with people.”

Malek asks Mehdi: “What can a third place person on a list to do ensure that their list gets a seat.”

Mehdi Lamloum: “There are 93 lists, and in some cases, the third on a list has a better chance. The groundwork is incredibly important: Despite having no financial means, we have to deploy ourselves and go door-to-door. But the most important part is that we’re convinced by what we’re defending.”

“Despite the fact I used to rely upon social media, I told people that in this case, Facebook will not be of much help. It’s like opening a tap with a full flow of water: you can never get enough water in your mouth. On the ground, we need to be closer to the people.”

Malek asks: “You have just mentioned something; you have experience dealing with social networks and you can make a difference. But from what you’re saying, social media is not enough to make a breakthrough, particularly for an independent list. What can we do to change the media and how it deals with the elections? We have twenty days left.”

Tarek Kahlaoui: “What should we do? I think we should insult television and radio stations, they’re ignoring 45% of us.”

Slim Amamou adds: “This isn’t the only problem; people are actually trying to buy candidates; these people are against independent candidates, as if independents are themselves a party. We know, however, that they’re independent, totally, and not affiliated with any party. I think independents should make a bloc.”

Riadh Guerfali says: “We are going to contact media and TV.” Malek asks, “Are you going to have a sit-in or what?” Riadh responds, “There are 45% of us, how are we going to be ignored? … I will write, I will publish widely about this issue, and tomorrow, anyone who has made enemies of independent candidates, should not rely on us. Finally, I would like to say I have entered these elections without a political action program within a political party but I think one of the good things is that after the 23rd of October, even if the independents don’t have sufficient voters, they’ll have the last word.”

To clarify, Malek says that they could be some kind of arbitrator between the other parties.

Amira Yahyaoui disagrees with Riadh Guerfali that independent lists should unite. “I am independent because I think the constitution needs to be drafted according to citizen wants. We will defend ideas; not a set of ideas, but idea by idea.”

Mehdi Lamloum: “Forthcoming politicians have one thing in common: They will be held accountable. These bloggers are the politicians of tomorrow. You have seen the cameras here, they belong to a very well-known Arab TV station.”

With that, Malek closes the debate, as we’re running late.