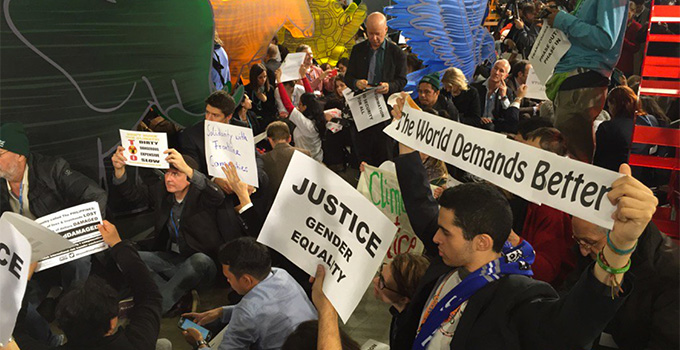 With just under 48 hours to finalise a draft agreement, many core and divisive issues – including industrialised countries honouring their past commitment to raise $100 billion by 2020,  the issue of redress through loss and damages, differentiation and increasing ambition by keeping below 1,5°C – all remain up for negotiation, following the release of a new version of the draft agreement yesterday afternoon.

“Every one of these points are under threat and bracketed“ said Craig Mokhiber, from the Development & Economic & Social Issues Branch (DESIB) at the Office of the High Commissioner for Human Rights (OHCHR).

Human right advocates argue that a number of outstanding bracketed issues within the text – such as loss and damages and keeping below 1.5°C  – come under the umbrella of rights already enshrined in existing human right conventions, and should therefore be examined through this prism as well as through the commitments governments have already made by ratifying other human right conventions. 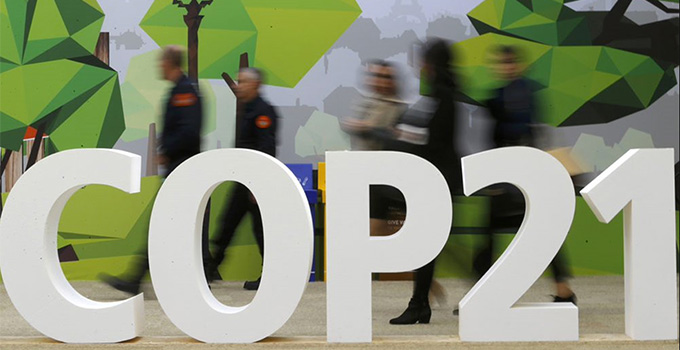 “The final agreement needs to include a commitment to talk about loss and damages,” today announced John Knox, OHCHR Special Rapporteur on Human Rights and the Environment. “Governments should be pursuing the lowest possible target – which means 1.5 degrees, to fulfil their human rights obligations.” According to Knox, who is mandated to review the application of human rights in international environmental law “we need to recognise that climate change affects other rights,” adding that “there is a relation between human rights and climate change.“ Human rights law also applies to adaptation and response measures generally – the Paris agreement should recognise this as well” added Knox.

For rights advocates, the inherent link between the application of human rights and the impact of climate change should not be up for discussion at the Paris negotiations because the impact of the latter is already affecting a panoply of rights.

The struggle is going on – climate change has direct impact on a broad range of human rights – food, housing, water and sanitation – and people living in small islands which affects their right to self determination – and for others, the right to life itself, said Mokhiber.

Not All countries are supportive of strong human right language

During the negotiations, delegates from a number of countries – including Chile, Costa Rica, Mexico and the Philippines and some small island states as well as trade unions and indigenous rights groups– have been praised for their support of the inclusion of human rights specific language in the draft text.

According to Amnesty International, the inclusion of human rights languages would reflect “core principles for mitigating and adapting to climate change, and providing guidance to governments on their obligations to ensure that human rights are protected in carrying out the agreement.”

But not all key negotiating countries are in favour of this approach. Joe Amon, from Human Rights Watch said yesterday that some countries “are seeking to remove these references, and the strong emphasis in the document on human rights, from Article 2, the purpose section of the agreement.”

Norway released a statement this week claiming to support including reference to human rights in the preamble, but not in Article 2 of the current draft text. However, this only came following alleged “NGO pressure exerted on Norway,” according to rights group Amnesty International (AI), who also stated yesterday that although the US has spoken “in favour of human rights language”, the US’s opposition to the explicit reference to human rights within the agreement diminishes “the importance of a central role of respect for human rights in the response to climate change.”

According to reports, for Saudi Arabia, their objection to the inclusion of human rights language in Article 2 centred on their needing to be a reference to “the right of peoples under occupation” in the language of the Article in order for them to support it.

Recognising the importance of empowering women

For celebrated rights advocate Mary Robinson, who participated in a number of panel discussions to mark Gender Day at various side events on Tuesday at le Bourget on behalf of her foundation Climate Justice, there is no doubt that “climate change affects human rights,” and that the issue also encompasses the question of justice and gender equity.

“Women are at the frontline of adaptation and resilience” adding that negotiators “should go and ask grass roots women about adaptation” as they are already putting these measures in place. Robison also stressed the importance for negotiators to keep “Article 2.2 in the final agreement.”

With under 48 hours left for parties to complete the negotiations,  a new version of the draft agreement is expected this afternoon, but the inclusion or exclusion of explicit human rights or gender specific language remains open for debate. According to Knox “This issue is going to continue long after Paris – Paris can provide a strong statement which can be used as a basis for the future decisions which will have to be made.” The UN Special Rapporteur also announced that he will present his human rights and climate change report to the Human Rights Council in March 2016.