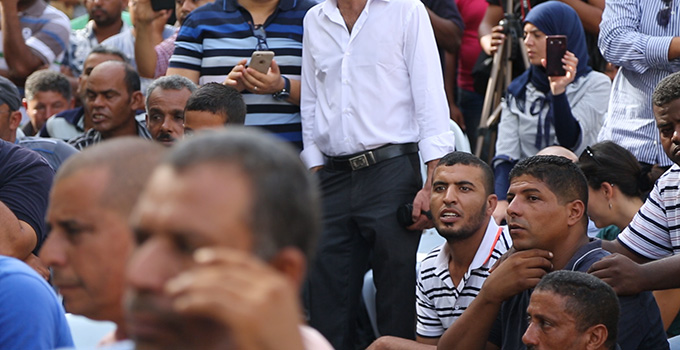 Since the Tunisian uprising between 2010 and 2011, residents of Jemna, who formed the Association for the Protection of Jemna’s Oases (APJO), reclaimed a farm of 185 hectares which had been handed over to two investors under the umbrella of Ben Ali’s system of crony capitalism and its revenues used to contribute to the efforts of urbanization (supposedly started by the State). Currently, the central motivation behind Jemna’s social protest is to force the State to acknowledge their right (legal status) to manage the oasis and invest the revenues to carry on their developmental projects.

In the last five years, inhabitants of Jemna and the APJO managed to:

Jemna’s social protests, which intensified a few days ago after a decision taken by the Ministry of Finance and the Ministry of State Properties and Land Affairs to freeze the APJO bank account, were preceded by the accomplishment of development projects in one of Tunisia’s far-flung regions by the APJO and the residents of Jemna. Since the Tunisian uprising to the present, the experience of social activism in Jemna remains unique.

The uniqueness of social activism in Jemna lies in residents’ ability to go beyond traditional social activism. Before the uprising between 2010 and 2011, social movements in Tunisia operated in a nondemocratic setting. Undoubtedly, the aim of these movements was to bring about political and social change, thus their activism played the role of a ‘destructive mechanism’ (protests, strikes, etc.) that aims to become a constructive one in the long run by creating a new political and societal reality.
Throughout 23 years of Ben Ali’s rule, these movements’ attempts to bring about change were limited and so were their chances to develop their social activism dynamics. In other words, these social movements could not transition from a destructive mechanism to a constructive mechanism capable of creating a real pressure on the State.

In Jemna however, the social activism of inhabitants and the Association for the Protection of Jemna’s Oases appears to be transitioning from a destructive mechanism (2010) to a constructive mechanism in subsequent years. By constructive mechanism I mean the ability of the social movement in Jemna to move beyond creating a pressure on the State by means of protest, into creating what sociologist Asef Bayat calls a “new reality on the ground” (changing the infrastructure by making developmental projects), a reality that the State can “see” and consequently has to deal with.

Another sobering aspect of Jemna’s social experiment is that it echos Asef Bayat’s analysis of social movements in the Middle East in terms of the notion of “pressure from below.” This form of pressure is quietly exercised by individuals through grassroots activism that generates in the long run an increasing visibility which forces the State to take action.

The differences that are apparent between the examples that Bayat presents in his analysis of social movements (“Life as Politics: How Ordinary People Change the Middle East”) and the example of Jemna might be explained by the context in which each case of social movements operates, i.e. a democratic or nondemocratic setting, or a country in the midst of a transition phase.

Certainly, citizens of Jemna benefited to a large extent from the transitional period in the aftermath of the Arab Spring in Tunisia to carry on their developmental projects without much interference from the interim governments. This fact has to be remembered when comparing the social movements before and after the Tunisian uprising. But even after controlling for this variable, that is to say, the “more associative freedom” after 2010, Jemna’s social activism remains singular among other forms of social activism in Tunisia and the Middle East at large.

For some Tunisians, the ongoing events in Jemna are regarded as an exemplary model of social activism. For others however, Jemna poses a serious threat. Advocates of the latter stance claim that people in Jemna are audaciously challenging the State’s authority.

I asked Taher Tahri, president of the Association for the Protection of Jemna’s Oases, why some see the experience of Jemna as a threat. Tahri told me that “they consider our experience as a threat because it exposed their corruption…they fear that other regions in the country will replicate our experience…Jemna’s message is simple: the making of a new development model is possible.” On the probability of a confrontation with the State, Tahri said:

What marks current events is the ability of Jemna’s experiment to dust off important and looming questions concerning the State: how will the government react to a mass mobilization against its failed development strategies knowing that mobilization agents and actors have already offered an alternative for the existing State development model on the ground, an alternative championed by citizens of Jemna and many Tunisians including social activists and politicians? Moreover, will the State revise the land ownership laws which have been abused since French colonization?

These questions have become prominent in the public eye. Thus, the task of finding answers falls to Youssef Chahed, the 41-year-old agricultural engineer who declared upon his appointment as prime minister that “in this delicate time we need to make a lot of audacious decisions.” But for the moment, Chahed’s so-called “national unity government” seems to have neither offered any serious answers nor made any audacious decisions relevant to questions raised by Jemna experience.

In a sense, the political implications of Jemna’s social activism on State policies are still cloudy. Some State officials, such as Mehdi Ben Gharbia, have not shied away from praising Jemna’s experience on television, saying that it only needs a legal framework. Other officials however, including Prime Minister Youssef Chahed, are solely offering a Socratic answer regarding Jemna: “All I know is that I know nothing.”