The wreck on Sunday, June 3 which cost the lives of 84 people off the coast of Tunisia’s Kerkennah islands is a reminder of the inequality that Tunisians face in terms of mobility. It can never be overstated that what we call « dramas » in the Mediterranean are not the fruit of tragic coincidence, but of European public policies which Tunisians continue to pay for with their lives. Not only is Tunisia among those countries whose citizens are systematically subjected to the tedious administrative procedures for visas to European countries, but even within their own country’s borders, Tunisians must comply with paperwork-heavy procedures and  the absurd requirements of foreign embassies and the selective immigration policies that they enforce. In terms of migration, Tunisian authorities are doing nothing to improve the situation of those who are hard pressed to obtain visas. Indeed, they are doing quite the opposite: for years, it is Europe’s security agenda targeting traffickers and migrants that the Tunisian government has preferred to adopt.

The story behind the visa

Throughout the 20th century, migration across the Mediterranean occurred relatively freely. But with the implementation of the Schengen Agreement in March 1995, came the end of freedom of circulation. If in Europe this agreement is the synonym of progress because it abolished borders within the continent, Europeans often forget to mention its other effect, namely the erasure of interior borders through the strengthening of the Schengen Area’s external borders—a strengthening which culminated in the death of thousands of people in the Mediterranean. Although still today this murderous policy is camouflaged beneath terms such as « human tragedy » and « drama », they are very concrete public policies which have transformed the Mediterranean into a cemetery. 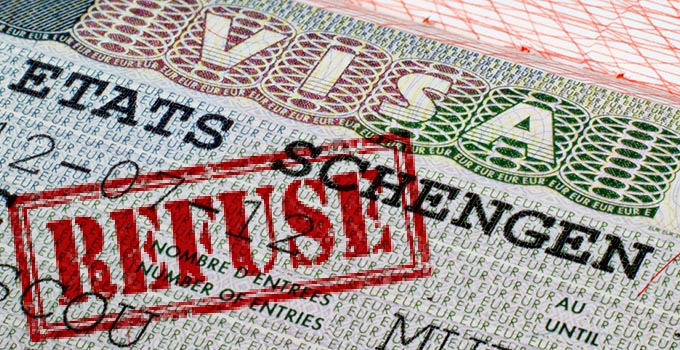 The harmonization of entry conditions within Schengen Area member countries brought about a general hardening of policies. Over the years, borders became closed to the less fortunate countries of the southern Mediterranean. The hardening of European migratory policies did not remain without effect in Tunisia. Faced with the impossibility of obtaining visas, certain Tunisian citizens, notably those without work or social security, turned to the clandestine maritime crossing networks oriented towards the Italian coasts. In response to this phenomenon, Tunisian legislation mimicked a repressive approach. Thus, the law concerning passports and travel documents holds that « Any Tunisian who knowingly leaves or enters the Tunisian territory without an official travel document will be punished with 15 days to six months in prison and a fine of 30 to 120 dinars, or with one of these penalties only ».

As Mehdi Mabrouk, specialist in the sociology of migrations, notes, « these repressive laws were established around the same time in the Maghreb countries ». Although it is difficult to confirm as much given the unavailability of archives, the concordance of legislative changes in the Maghreb give the impression that it is indeed European pressures which led to a new order. Add to this general hardening of legislation the prison-guard role upheld by Tunisian authorities vis-à-vis its own migrants. What do we get in return? Training and equipment from the Europeans.

The docility of Tunisian authorities in the face of Schengen Area countries’ repressive migratory policies does not, however, seem to pay off. The statements made by Italy’s new Interior Minister Matteo Salvini indicate as much. Only just freshly appointed to his position, this political official from the neo-fascist Lega Nord party accused Tunisian authorities of collusion with traffickers in efforts to send Tunisian « criminals and delinquents » to his country. The statement earned the Italian ambassador to Tunisia a summons by the Ministry of Foreign Affairs. Salvini, who had made the declaration during a visit to Sicily, principle point of entry for migrants as well as former scapegoat of Lega Nord when the latter was separatist, apparently forgets that the transfer of « criminals and delinquents » to third countries is among the purest of European traditions. The United States, Australia, New Zealand…only once-colonized, subsequently westernized nations are the fruit of criminal deportation as compensation for the extermination of native inhabitants. Nor can we forget the case of Bettino Craxi, former Italian Prime Minister implicated in the Mani Pulite (Clean Hands) operation, who sought refuge in Hammamet in order to escape the Justice. In addition to Salvini’s remarks, we recall those of Austria’s Prime Minister, himself of a xenophobic, far-right background, who suggested that European border guards be sent to North African coasts in order to stop the arrival of migrants. It would thus appear that the task of border patrol which falls to Tunisian authorities is not up to par with expectations of a Europe progressively embroiled in fascist tendencies. As for the EU, the prevailing position is clear: out of the question to reconsider the existence of visas. In an email response to Nawaat, EU representatives in Tunisia explain that facilitation alone will be granted, and that for this to occur, « important efforts must be made to limit the increasing illegal migration of Tunisians to the EU and also for the return of irregular Tunisian migrants to their country ».

Throughout the course of Tunisia and EU free trade (DCFTA) negotiations, a request for the suspension of a visa for entrepreneurs was formulated by the Secretary of State for Exterior Commerce Hichem Ben Ahmed. The request was vetoed in Europe by Ignacio Garcia Bercero, Director of Negotiations for the European Commission. Bercero affirmed that while facilitation of procedures was foreseeable, the possibility of suspending the visa was not. Contacted by Nawaat, EU representation in Tunisia confirmed this refusal, arguing that « according to European law, either all citizens of a third country are subject to a visa obligation, or all citizens are exempt ». For the sociologue and former Minister of Culture Mehdi Mabrouk, « Europeans think that if we suspend the visa for qualified persons, this will draw people who are non-qualified to Europe ».

Beyond Europe’s predictable refusal to suspend the visa, this episode shows that, in terms of the right to mobility in Europe, Tunisian authorities are not ready to defend anyone who does not belong to the most privileged segments of the population. This means entrepreneurs, students, doctors, or in other words, precisely the contingent desired by European countries. The others—those without work, those in precarious situations and informal workers are left with the option of embarking on irregular routes at the risk of their lives. What’s more, the absence of national mourning for those who have been lost in this attempt is among the most telling signs of indifference. This disparity amongst citizens in terms of mobility adds to the numerous forms of inequality that persist throughout the country and that consistently affect the same people. And for now at least, the few possibilities which might attenuate the situation and counter Europe’s hegemonic migratory agenda, such as abandoning bilateral negotiations and adopting negotiations that unite Maghreb countries, do not even appear to be on the radar.