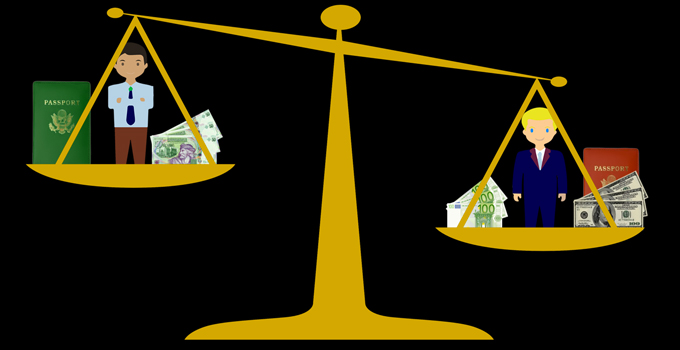 « It’s difficult to not feel discriminated against relative to expats », sighs Bechir with frustration between two puffs of cigarette. Salaried employee in a western non-governmental organization (NGO) specialized in development, he doesn’t hesitate to express his bitterness: Bechir is paid three times less than his European and North American colleagues who hold equivalent positions. Amal, employee in another organization, shares the same resentment. Recently promoted to take the place of her superior, an « expatriate », Amal nevertheless earns a third of what he was making. A drastic drop in pay for which she finds only one explanation: white privilege. The same goes to explain why any white employee settled outside of his native country is called « expatriate » while all others are immigrants.

Amal, for instance, is much better paid than the rest of her Tunisian colleagues. She’s an exception, and is made to know it. But she also knows that her salary is less than that of certain European or American colleagues who work under her, and who benefit moreover from advantages associated with « expatriation » (in most cases nothing more than emigration), such as rent paid by the organization and extra vacation time. As for Bechir, he may make a good living with a salary of 2,500 dinars a month, but his western colleagues make 2,800 dollars a month and benefit from lodgings provided by the employer in a posh neighborhood of the capital as well as an extra sum of dinars every month for daily expenses. A fairly humiliating advantage since, according to Bechir, « The pocket money they get for drinking and eating, while Tunisian employees don’t even get restaurant tickets, is the equivalent of a good salary for a Tunisian ».

Over the past few years, articles published here and there in foreign press have denounced the differential treatment between immigrated western personnel and local personnel that takes place in a large proportion of international NGOs. This situation compels all the more cynicism because it involves a number of agencies working in the sectors of development, human rights and humanitarian assistance in African and Asian countries. What might otherwise pass as an exception, owing to work laws in the country where the NGO is based or to the absence of qualified local workers, is in reality a fine-tuned system of discrimination. Omnipresent in Tunisia’s private and public sectors, from agriculture to security, not to mention economy, culture, education, environment and health, NGOs who discriminate against employees based on their origins all the while claiming to stand for values like justice and equity are in a position where their legitimacy is seriously compromised. And yet the situation does not often give way to protest within these organizations, the fear of losing one’s job and (relatively) privileged status being too great. The only form of protest we came across was a petition which circulated at the end of 2017 amongst personnel paid in dinars within German political foundations. The petition, equipped with figures to support the demand for increased salaries given the elevated inflation rate, faced a lukewarm, if not outright chilly, reception within foundations like Konrad Adenauer Stiftung.

On the menu of justifications advanced by western employers, the first item we find is compensation. In this regard, Tunisia is seen as a poor, dangerous country and the westerner who settles here as making a sacrifice in terms of quality of life. He therefore needs incentive to make the move through advantages such as the « hardship premium », theoretically giving him the same comforts he is accustomed to at home. « Coming here is a sacrifice, an uprooting from one’s family. Even if I earn a bit more than my colleagues for equivalent work, I still learn less than if I were to work in my own country », explains Elodie, a European employee settled in Tunisia with an expatriate contract. For Bechir, however, this justification doesn’t hold. « If they had to replicate the lifestyle they’re living here, they wouldn’t last a week in their countries », he says with sarcasm. In the organization where Amal works, western immigrants even have the right to extra vacation days to travel and recover from their time in such a terrible country (« white escape », « work-cation »). In reality, with accommodations overlooking the sea and sometimes housekeepers, a pool and a work car, the expat bubble proves to be an abscess that is difficult to pop. Elodie confides as much, indicating that even if her country is very comfortable, « Tunisia is, for me, a paradise ».

A second argument advanced by employers relates to the presumed superiority attributed to the white immigrant, who is regarded as both figure of authority that local staff are more likely to obey, and communication tool for suscitating the confidence of funders and other important organization partners. Here we find an entire palette of ill-founded value judgements: they are more competent, have more experience and recognized diplomas. Today, however, this argument does not stand up to analysis. Even with higher level diplomas under their belt and fluency in multiple languages, Tunisians like Bechir and Amal occupy the same positions and potentially dispose of knowledge and competencies specific to Tunisia in terms of local and national development that no diploma can measure. « The Tunisian team has greater productivity than the expat team », confirms Bechir before adding « and 60% of them don’t have a Bachelor’s degree, while I have a Master’s ». Another, even more flagrant example, is Michael, who came from Europe for an internship in Tunisia. « As intern, I received a salary of 1,500 euros. My Tunisian colleagues, who were on contract, were paid between 400 and 500 euros. In terms of work load or required qualifications, it wasn’t justified », he confirms. And yet employers do not consider the needs and competencies of locals as being equal to those of westerners. It is indeed difficult to justify such inequalities without at one point or another evoking « white privilege », or the idea that such advantages are designated to westerners in their capacity as whites. In other terms: racism.

The case of binationals is shocking proof of the racist nature of these differences: we found at least two cases of French-Tunisians residing in France—and who had indeed never lived in Tunisia—offered « local » salaries owing to their Tunisian nationality, although the position in question required that they settle in Tunisia. Furthermore, the (generally unofficial) impossibility of Tunisians evolving within an organization to occupy positions of high responsibility or to become themselves « expats » in another country where the NGO is active, attests to the existence of a glass ceiling that is determined by nationality. In the organization where Elodie works, teams are most often lead by a foreigner with a Tunisian assistant. The inverse is more rare and, moreover, « expats have a much greater chance of being noticed by other employers and of evolving professionally », she notes. « Because we already have solid international experience, we are better prepared to leave than Tunisians », Elodie presumes, « but I realize that leaving is an option for certain people ».

It goes without saying that inequalities in treatment have a direct impact on work atmosphere. Owing to the difference in pay, Tunisian employees are incapable of entertaining the same lifestyle as their western peers. As Bechir confides to us, « Even if I wanted to go out with those I like, I couldn’t do it often because they only go to expensive places. Even for lunch break it’s a problem ». Far from being a trivial question, difference in salaries transforms the western middle class into modern day aristocrats and prevents them from having the same hobbies and social circles as Tunisians, often times without even being aware of it. « The majority of foreigners who work in NGOs know and only go out with each other because pretty much all of them have the same salaries », observes Bechir. Ultimately, this ghettoization of westerners who have made their enclave in the northern suburb of Tunis—and who in doing so have driven rent prices through the roof—echoes the resolutely communitarian lifestyle of colonists who did know any Arabs aside from their work subordinates, housekeepers and gardeners. For her part, Elodie notes that work relations between immigrants and locals are very cordial, that « real friendships are formed », even while admitting that the problem exists: « I understand their anger and I respect it ».

What’s more, this isolation draws under scrutiny the very quality of work carried out. Not speaking Arabic, not rubbing shoulders with locals who do not have the means to entertain the same lifestyle, staying only among other expats, are all factors that eliminate the possibility of leading coherent and efficient development projects. Instead, the preferred projects are those which are disconnected from local realities, appreciated by funding institutions and often modelled after experiences in other places by individuals equally isolated from the countries in which they are living. This situation is reinforced by the logic at work in the world of international NGOs, as The Guardian highlights: « Missions in country are incentivized by money. The more you can raise, the happier your colleagues in the region and in headquarters because some of that money goes into paying their salaries and office rents … a successful humanitarian operation is based on two key indicators: how much money you raise with the donors and how many beneficiaries you have reached with the aid money you have been given … rather than the quality of the programs you are running ».

If this way of functioning is a global phenomenon that extends far beyond Tunisia, the question of inequalities amongst employees could see progress with the new law against racial discrimination, only just passed in parliament on October 9, in light of the fact that the law also applies to legal entities, and therefore to NGOs.