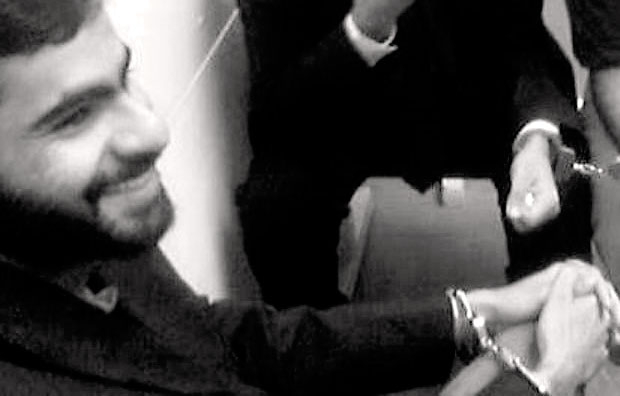 Amidst fear for Ali’s safety from torture among Bahraini activists on the ground contacted by this campaign, the latest news indicate that Ali’s wife and family applied to visit him today at his place of detention at the Bahrain Interior Ministry. It is still unclear whether the application will be accepted, however sources informed us that the Interior Ministry officials told the family to bring Ali some clothes.

In the meantime, there has been an outpour of support and solidarity from all over the Arab blogosphere and also from the global blogosphere. bloggers from over 15 countries so far have posted on their blogs demanding Ali’s release and that release of the other detainees in the latest wave of arrests in Bahrain in a variety of languages and some have volunteered design of badges to be distributed and displayed by bloggers. Also, activists revived the original Free Ali blog that was started during Ali’s first ordeal back in 2005.

On the social media front, a Facebook group was created and is growing rapidly fueled by the buzz created over twitter by many users. Bahrain’s Foreign Minister Khalid Al-Khalifa who maintains a twitter account, was targeted by twitter users demanding Ali’s release in the last 48 hours.

The Bahraini government, already bracing for a potential global embarrassment, issued a statement yesterday citing anti-terror legislation trying to link Ali to an alleged conspiracy about Bahraini opposition and its crackdown on them. The government alleges it detained Ali while he was trying to “flee the country” omitting to mention that Ali is an airport employee whose work requires to be at said location.

In the same statement, and in the wake of a speech by Bahrain’s king, they allege that the current wave of repression is to stop a “terrorist plot” to undermine the country.

by describing him with the bizarre term “referred to as a blogger”, Bahraini officials seem anxious to cover up their tracks and to disguise its attempt to silence BahrainOnline (Ali’s very popular forum.)

According to Bahraini activists, the forum is back again online after it was taken down yesterday most likely after the Interior Ministry forced Ali through coercion to hand them the passwords only to be recovered later by other activists. The same activists voiced concern over the government getting its hand on the contact info and the forum’s users who number in the thousands.

As this was unfolding, Bahrain’s Center of Human Rights, The Arabic Network for Human Rights (ANHRI) and Front Line Defenders issued statements raising concern for Ali and other detainees given Bahrain’s established torture track record.

This campaign holds Bahrain and its government fully responsible for any physical or psychological harm against Ali Abdulemam. We demand his immediate and unconditional release.

Some of the reactions:

Alan Mairson (USA) – We love cheetahs, but shut up about democracy

Hussain Yousif (Bahrain) – Towards a better understanding of Abdulemam