Because it wasn’t just Saudia Arabia, Iran and Lebanon making the headlines: though it acts to the contrary, it seems the United States is aware of Tunisian abrogations of human rights and has given it some thought: 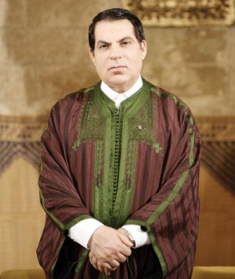 So much to monopolize, so little time…

Too often, the Government Of Tunisia prefers the illusion of engagement to the hard work of real cooperation. Major change in Tunisia will have to wait for Ben Ali’s departure, […] Tunisia has big problems. President Ben Ali is aging, his regime is sclerotic and there is no clear successor. Many Tunisians are frustrated by the lack of political freedom and angered by First Family corruption, high unemployment and regional inequities. Extremism poses a continuing threat. […]

Tunisia is a police state, with little freedom of expression or association, and serious human rights problems. […] for every step forward there has been another back, for example the recent takeover of important private media outlets by individuals close to President Ben Ali. [Source]

I am on the point of frustrated raptures: delighted that at last Ben Ali’s dictatorship has been acknowledged out loud, yet frustrated because ultimately, there may never be any progress in addressing his shameless tyranny.

[Ben Ali] and his regime have lost touch with the Tunisian people. They tolerate no advice or criticism, whether domestic or international. Increasingly, they rely on the police for control and focus on preserving power. And, corruption in the inner circle is growing. Even average Tunisians are now keenly aware of it, and the chorus of complaints is rising.

Tunisians intensely dislike, even hate, First Lady Leila Trabelsi and her family. In private, regime opponents mock her; even those close to the government express dismay at her reported behavior. Meanwhile, anger is growing at Tunisia’s high unemployment and regional inequities. As a consequence, the risks to the regime’s long-term stability are increasing. [Source]

Branded ‘TuniLeaks’, the missive comprises of 17 documents that reveal the content of exchanges between the U.S. Embassy in Tunisia and the U.S. State Department.

Sent between May 28, 2008 and February 9, 2010, two are written by the current Ambassador of the United States of America in Tunis Gordon Gray, and 15 by his predecessor.

The report also addresses new ministers of the Tunisian government, including some pithy quips on the Foreign Minister:

Abdelwaheb Abdallah has been known to open his meetings with lengthy soliloquies about Tunisia’s political, social, and economic successes and moderate positions on regional issues.

While the businessman, Sakhr El Matri, is more preoccupied with polluting La Goullette’s culture with franchises:

El-Matri also expressed interest in opening a McDonalds restaurant franchise […] and suggested a likely first option would be to open a franchise in the new cruise port he is developing in La Goulette.

And so it continues, painting a deeply unflattering and bombastic image of Tunisian leaders and their minions.

It is embarrassing – sure.

But it is also positive: the more attention drawn to Ben Ali’s shambolic political posturing, the more pressing the need for change.

To date, the abrogations of human rights in Tunisia has been swept under the souk-bought tourist rug.

This cannot be the case any more: Tunisia has potential – it just needs the right leader.