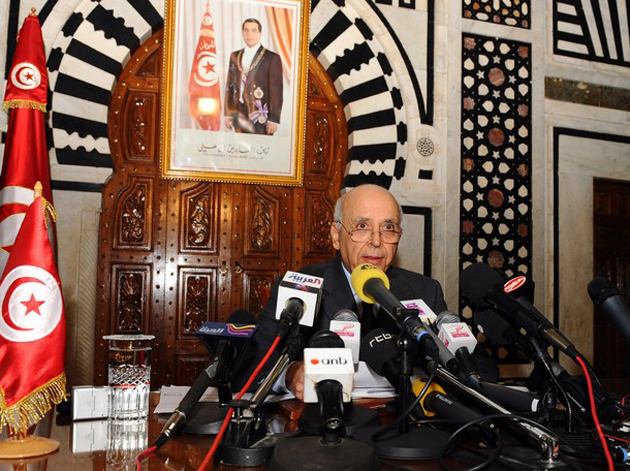 To be sure, there have been some considerable concessions. Nevertheless, despite daily demonstrations and the resignation of some newly-appointed ministers, Messrs. Ghanouchi and Mbazaa have so far not budged an inch on the crucial demand that old-regime figures be excluded from the unity government. As each day passes, this defiance begins to look more and more like a calculated maneuver to gain time and deplete the energy of the thousands of protesters. Mr. Ghanouchi is artfully borrowing tricks from Ben Ali’s playbook.

Tunisians (myself, at least) do not know much about Mr.Ghanouchi other than that he has been in one way or another in the ruling party and the Tunisian government since 1975. His clean hands and integrity are trumpeted by some in the opposition parties, while others merely point to the need for a skillful technocrat to run the government. What is remarkable about Mr.Ghanouchi is that he has shown a notable talent for political rebirth and malleability.

Mr. Ghanouchi has held his ground and has artfully formed the unity government by tricking the labor union into joining – yet the labor union has no business being part of a government in the first place. And he has defiantly excluded all but three opposition parties from the negotiation and the government. Furthermore, Mr Ghanouchi has not only maintained eight old-regime ministers but has kept among them the very interior minister who was hastily appointed by Ben Ali, in an effort to appease protesters, days after the beginning of the popular movement. Consequently, the interior minister’s first appearance under the unity government was disastrous and brought upon him the ire of the whole Tunisian nation. But Mr. Ghanouchi went even further, appointing a young blogger in a government position and a film director as culture minister.

It seems to me that Mr.Ghanouchi is more concerned with appearances than with creating a true inclusive unity government.

In the past few days, facing mounting street anger, Mr. Ghanouchi has given in to some demands but not others. Although he still refuses to consider the key demand of changing the composition of the unity government, he willingly gave up his RCD membership, as did the other RCD members in the government.

Renouncing RCD membership is viewed by ordinary Tunisians as no more than a smoke screen and an insult to their intelligence. It is viewed by many, including myself, as another page from Ben Ali’s book of tricks. It does not go far enough to appease protesters but it is enough to give an appearance of understanding of the issues.

We can even predict Mr.Ghanouchi’s next move. It will be limited to excluding one or two of the old-regime figures from the current unity government – probably including the interior minister. But will that be enough?

Let me start by saying I do not know who Mr. Ghanouchi’s advisors are. They might even be the same people who advised Ben Ali. I suspect that the man is not single-handedly deciding when to cave in and when to hold his ground. I am more than convinced that he or his advisors thoughtfully formed the unity government and carefully chose who should be in it, including the young blogger and the film director, who are clearly meant to give the appearance of openness. I am sure that the decision to keep the old-regime minister was deliberate, just as I am sure that Mr. Ghanouchi expected his decision to anger some if not most Tunisians.

It is hard to know for sure the inner thoughts of Mr.Ghanouchi but it is easy to see the result of his decisions on the ground: a mounting anger and a state of uncertainty, while time is running out for the key deadline of a presidential election within 45 to 60 days. One can only speculate on his reasons for resisting demands to exclude old-regime figures. Did he not expect such anger? Was he betting on people’s anger to wear out? Did he made some promises to foreign powers? Did he genuinely believe that the old figures he kept are the only ones capable of handling the day-to-day running of key ministries? Was he afraid of a state of chaos? Was he afraid that secrets implicating current and former regime figures would be made public? Any of these conjectures may be accurate, but only Mr.Ghanouchi and his shadowy advisors – if they exist – know for sure.