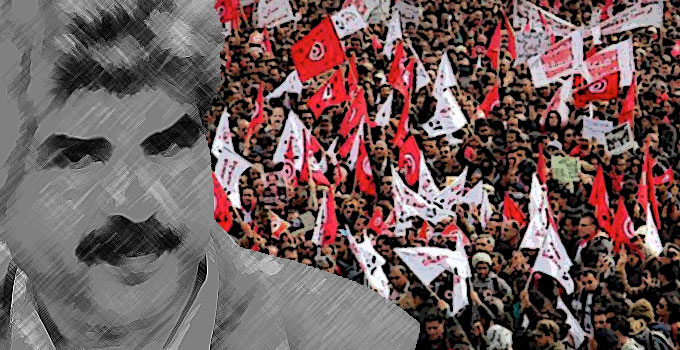 From July 25th onwards, socio-political forces have been seeking to transform Tunisia from a post-revolutionary to a “re-revolutionary” country. Complications have risen as “terrorist operations” seem to multiply, not by coincidence. It would be presumptuous to force a final analysis on the situation, since a lot of details remain mysterious; however, let us try to look at the “story” from different angles and perspectives.

Following the assassination of the Nationalist politician Mohammad Brahmi and the death of eight Tunisian soldiers in an ambush in Mount Chaambi, Tunisia has been suffering a mounting crisis that seems to escalate almost daily. The political components of the opposition, notably the Popular Front (Communists, Socialists, and Nationalists) and Nidaa Tounes claim that the transitional Troika government is an utter failure when it comes to economy, politics, and national security. In synchrony with these grievances, a group of youth, most of whom are either ideologically or affectively leftist, organized al-7all/al-ra7il sit-in in Bardo in front of the constituent assembly.

At first, both opposition parties and sit-in spokespeople voiced the same demands: the dissolution of the no-longer-legitimate government and the constituent assembly, and the formation of a new “salvation” government representative of all political parties except for Ennahdha (though the decision of exclusion is not unanimous) and presided over by an independent national figure. Those in favor of “legitimacy” did not simply sit on their hands, they populated a “parallel Bardo”, vying in number with the Ra7il sit-inners, calling for national unity and supporting legitimacy. This is as far as the narrative part of this article is concerned.

If we were to contemplate the two “Bardos”, the mobilization is seemingly bipolar: the “Down with the government and the NCA” camp vs. the “electoral legitimacy” camp. However, this reading flattens the more acute schism. Al-Ra7il sit-in is in fact a stew of heterogeneous ideologies. Participants include the Popular Front members (mostly Communist and Nationalist), anarchists, and Nidaa Tounes partisans (self-proclaimed Destourians). The latter group is the former two groups’ deadliest ideological enemy, deemed treacherous and reactionary. Anyone can imagine the conflicts that may arise amongst sit-inners with a seemingly common cause, incompatible ideologies, and antagonistic political interests -for ideological divergences seem to matter only to the youth and are of no relevance to politicians.

Towards a Political Consensus?

This bipolar mobilization might reflect much more than the “popular will”. It might be a negotiation tool between the different components of the political scene. Indeed, there is tendency to start inter-partisan communication to come up with a compromise that excludes the possibility of dissolving the Constituent Assembly. Popular protests, as massive as “The National Unity” gathering in El Kasbah on August 3rd, are therefore means of pressure to improve either side’s chances in the political negotiation process.

Zooming out of the national context, the fact that the “Arab Spring” countries are subject to trans-national bargains must not be ignored. This fit of chronologically-ordered acts of violence and terrorism that Tunisia is witnessing daily can be “outwardly-orchestrated”. A small look at the Franco-German European conflict for geo-economic footholds can reveal a lot as to which country is offering support to which side. I shall leave this geopolitical reading incomplete on purpose lest I should be accused of being an adept of the conspiracy theory. However, all of the circulating analyses are but readings, speculations, and guesswork. The geo-strategic factor should always be kept in mind, because revolutions trifle with power scales and require geopolitical revisions.

Where Does the Tunisian People Stand?

Unfortunately, the average Tunisian citizen, the one that is neither covered by “the media” nor “the parallel media”, seems to be disinterested. This dis-involvement is highly worrying: such a jaded, or simply indifferent, citizen can neither reform, nor reject, nor rebel. What is worse than being easily influenced by politicized calls is being hardly aware of them. This crisis does not require a thorough knowledge of politics or geopolitics; it calls for a sense of patriotism translated into efficient action. Who is more patriotic than the very people who rose in protest on a certain 17th December?