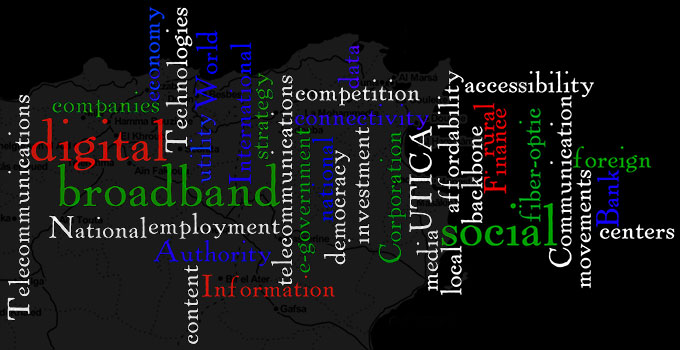 Global technological growth has had the proportionally inverse effect that the world is growing smaller. Today we cannot discuss the realm of Information and Communication Technology (ICT) without appreciating its literal and figurative interconnectedness with a country’s economy (affecting employment opportunities, investment by both local and foreign entrepreneurs) and the participation of the citizenry in social and political processes (in terms of access to information and capacity for personal and political expression). In Tunisia, the prominent actors and agents of democratic transition and the national media landscape that are so often the topics of Nawaat’s investigations—including the ATI, the ATT, the HAICA, whistleblowing platforms, freedom of expression and the right to information, transparency, the engagement of civil society—are also the foundation and driving forces (along with several important institutions mentioned below) of the vast and dynamic realm of Information and Communication Technologies.

Tunisia Broadband – THD
Tunisie Haut Débit (THD), or Tunisia Broadband, is a well-authored and accessible resource for readers to learn about and interpret Tunisia’s ICT sector and associated issues and current events, a springboard reference for investigation and/or contextualization of international studies that are certainly valuable but can also be broad, vague, imprecise, and/or questionable for the underlying objectives driving the research and proposed directives.

– a powerful driver for sustainable economic growth, job creation, and human skills development and an enabler of democracy and social transformation
– a key determinant in foreign direct investment (FDI) decisions
– the development of the domestic information and communications technology (ICT) industry, helping countries in the region to diversify away from natural resourcesGelvanovska, et al., Broadband Networks in the Middle East and North Africa

Lack of Competition and Incentive to Build Up Infrastructure

The key factors limiting the development of broadband in most countries of the region are lack of effective competition and lack of appropriate incentives to deploy and/or fully utilize infrastructure. Gelvanovska et al., Broadband Networks in the Middle East and North Africa

The authors report that Ibn Khaldoun is the one regional fiber-optic cable providing broadband connectivity across Libya, Tunisia, Algeria, and Morocco, that this line is «locked up in exclusive partnerships between utility companies and telecom operators, or cannot be made available owing to constraints of the national legal systems,» and that convoluted and disseparate administrative procedures prevent the development of backbone2 and backhaul3 infrastructure. «For example, in Tunisia, the government is obliged by law to go through an open and competitive tender process whenever it decides to award a new telecommunications license. In a fully liberalized market, it should be the market, and not the government, that decides the number of operators.»

Needless to venture too far into the concerns evoked by economic liberalization directives from the World Bank, the most famous of foreign institutions intent on opening Tunisia to the global market to an extent that has analysts and journalists (Naffati refers to «these constant pressures on the Tunisian government, each loan demanding more liberal sector reforms») more than a little skeptical about (a lack of) equilibrium at the mercy of the whims of a market economy. The report’s authors suggest that public-private partnernships (PPP) and national utility companies in particular have the capacity to promote facilities-based competition (which impacts operators and consumers alike, as well as quality and price of service) and develop efficient, cost effective models of infrastructure (of which one highly effective feature could be the leasing of excess fiber-optic capacity) that supply underserved regions. In Tunisia, three utility companies—the Tunisian Electricity and Gas Company (STEG), Tunisie Autoroutes, and the Tunisian Railways National Company (SNCFT), epitomize the unrealized potential of utilizing excess fiber-optic capacity, where theoretically, for example, the «SNCFT facilitates open access to its fiber infrastructure by allowing mobile operators to install fiber infrastructure along the ducts of the railway in a major dorsal line.» In practice,

While STEG has deployed about 2,700 kilometers (km) of optical cables in its facilities to manage high voltage and extra high voltage distribution, despite various requests from other operators, STEG has not leased excess capacity.
Tunisie Autoroutes has placed three pipes to deploy optical fiber cables on about 435 km of its highways. Despite the potential of this infrastructure, currently Tunisie Autoroutes has a conservative strategy and there is no installation of optical cables for its own use.
SNCFT is the most advanced in its awareness and use of fiber infrastructure. The rail company already has a network based on synchronous transmission mode (STM)-16 to manage its own operations, and its strategy on use of its network is proactive and open to any operators’ request. In addition, it has extensive colocation facilities.pp. 76, World Bank report

The report classifies Tunisia in an «emerging» phase of broadband development with «relatively high» prices (the poorest 40 percent of the population would have to spend more than forty percent of their income for fixed or mobile broadband) that reflect a lack of competition. Rural broadband, constrained by factors of geography, intermittent connectivity, and affordability, can be developed by requiring telecommunications companies to adhere to specified coverage plans, as well as through the provision of subsidies, the elaboration of alternative technologies for distribution, and the implementation of policies that promote digital literacy and equipment affordability.

Statistics are Sparse in the Jasmine Country
Naffati’s articles are ever a reminder of the reliable bittersweetness of World Bank studies. Whatever the underlying objectives of the research may be, (at least a good part of) the data assembled is of significant value. A THD article from March 31 announced the establishment of a Tunisia-based ICT Observatory–financed by the World Bank’s International Finance Corporation (IFC)–whose objective is to «identify and remove the gap that presently exists between the quality of the education of our students and what the job market demands.» According to Naffati, beyond academic theory, «practice, communication, and management” that are also integral to a university education are neglible at Tunisian institutions of higher learning. The observatory is to serve as research institution that promotes effective and appropriate reforms in the country’s education system (through direct recommendations to the Ministry of Education and Higher Learning) and to fill in the information gap for local entrepreneurs and foreign investors alike.

…unfortunately, the statistics available on the Jasmine Country are sparse or non-existant for certain points. One has to search the Net inside and out and make multiple phone calls to public authorities (such as the Ministry) in order to collect data on our country. And the worst part is that these data are not up to date and sometimes even erroneous.
Welid Naffati, UTICA and the World Bank Work on A New Project for the Promotion of ICT in Tunisia

E-Gov4 Stategy and the Potential Evolution of A Digital Economy
Among several apparent discrepancies (such as the report’s failure to mention the existence of two fiber-optic links with Algeria’s backbone), Naffati points out that Tunisia’s purportedly high internet prices are related primarily to «an absence of national strategy for the development of local digital content.» A more recent article on «E-Gov Strategy and Digital Economy Still Lagging,» quotes Kaies Sallami of the National Federation for ICT within the UTICA reprimanding the Prime Minsiter for enlisting collaboration on the national Roadmap whereas the government has lost time in fulfilling its designated tasks and in the meantime the slow materialization of a digital economy has meant that the country’s potential to become a «true technological hub» remains just that—a potential.

The Brain Drain of Local Digital Content
Global connectivity, Naffati argues, is not an unrealistic goal for Tunisia, in spite of the fact that many Tunisians are still unable to afford the necessary devices and internet service. A THD article from November 2013 estimated that more than 17 percent of Tunisian households had broadband connections and that nearly one half of the population, through mobile devices, PCs, and public computer centers (called publinets), was connected to the Internet. Houcine Bellil of the National Telecommunications Authority (INT) projected the increase of these numbers once the country’s fiber-optic capacity is exploited. Beyond what is utilized by the country’s main utility companies, namely the the National Water Distribution Utility (SONEDE), STEG, and Tunisie Autoroute, excess fiber-optic capacity can be ‘shared’ (leased out) to enhance infrastructures and networks of close proximity.

Data Centers? We are accumulating a googolplex. Fiber-optic? If you want it, we have it. 3G? It covers practically all of Tunisia’s inhabited regions. Tablets and computers? They have never been so available at low cost thanks to being «Made in China.» If we do not incite the creation of digital content designated for Tunisians, the citizen will have no interest in possessing 1, 20, or even 100 Mb/s and a high-tech gadget just to share a status or a video…Tunisia suffers from a problem of e-reputation. The absolute majority of developers (websites, applications, etc.) have not the least bit of confidence in Tunisia to host their content. Welid Naffati, E-Gov Strategy and Digital Economy Still Lagging

Though the THD and World Bank stand-points are different, there is a clear consensus of ideas for the reform and development of Tunisia’s ICT sector whose potential shall remain unrealized until the main limiting factors are addressed. Competition in telecommunications which impacts both operators and consumers and shapes both the quality and price of service must be encouraged; there need also be a focus on emphasizing expansion of rural broadband for marginalized populations; improving the quality and relevance of university-level education to reflect the ICT sector’s needs and market demands; augmenting and enhancing national data and statistics studies that are accessible and accurate for academic purposes and for the creation of effective policies; creating incentives for local and foreign entrepreneurs alike to produce content directed towards Tunisians which in turn incites national demand for new technologies and optimal internet connectivity. The initial work that encompasses the sector’s necessary reforms is that of the government and must be methodically devised, prompted, and implemented through a timely and forthright national strategy.

1 Broadband “refers generally to a telecommunications connection that is “always on,” as opposed to a “dial up” connection via the public switched telephone network (PSTN), and with speed rates higher than those obtained with a “dial up” modem… (pp. 2, World Bank report)”

2 Backbone refers to fiber-optic cables that are the «backbone of the information and data highways that make up the World Wide Web or Internet (pp. xi, World Bank report).”

3 Backhaul – “..the backhaul portion of the network comprises the intermediate links between the core network, or backbone network and the small subnetworks at the “edge” of the entire hierarchical network (Wikipedia, “Backhaul (telecommunications)”).”

4 E-Gov – «The underlying principle of e-government, supported by an effective e-governance institutional framework, is to improve the internal workings of the public sector by reducing financial costs and transaction times so as to better integrate work flows and processes and enable effective ressource utilization across the various public sector agencies aiming for sustainable solutions. It seeks to establish ‘better processes and systems’ aimed at more efficiency, effectiveness, inclusion, and sustainablility (pp. 2, United Nations E-Government Survey 2012).” 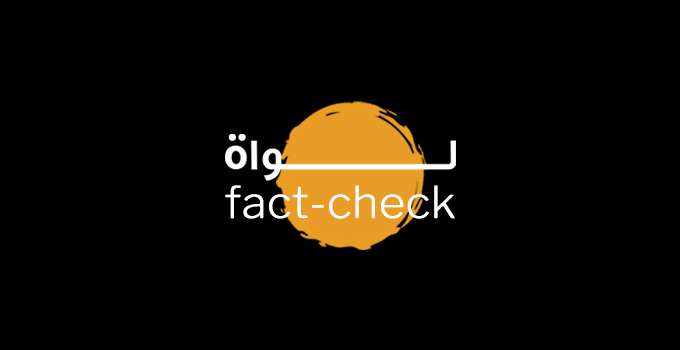 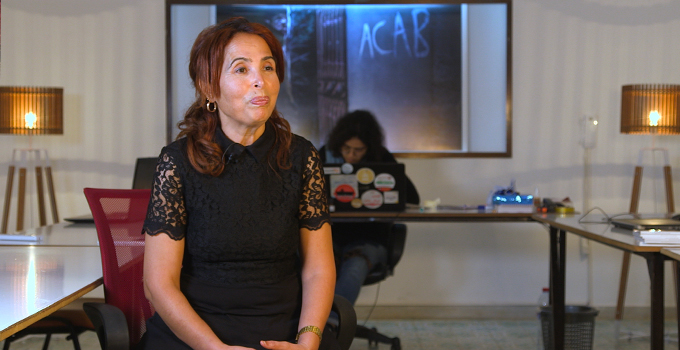 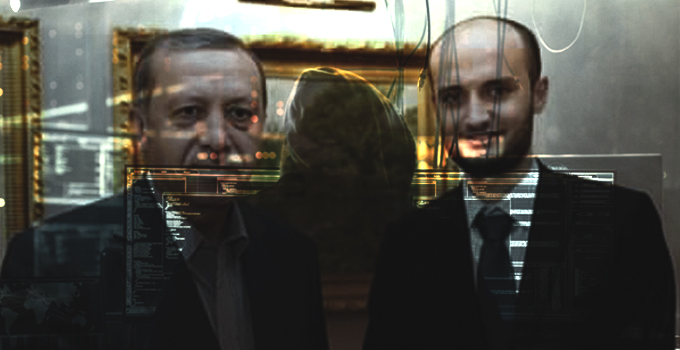