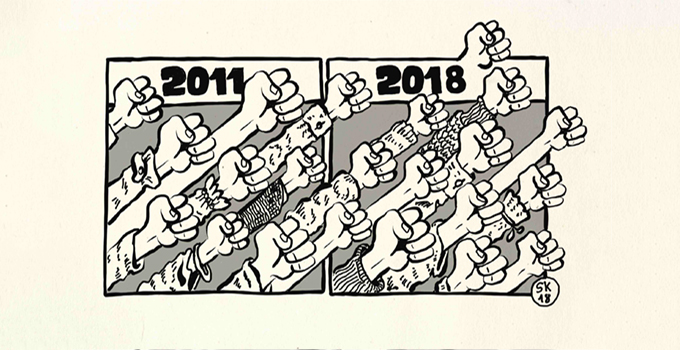 To understand the revolution, it is necessary to observe the effects it has produced. A revolution disturbs the two distribution mechanisms upon which the social contract rests: the distribution of roles and the distribution of wealth. In this article, we will focus on the latter to track the effects of the revolution. It is generally recognized that any revolution includes a phase of redistribution of wealth from the rich or the privileged to the poor or the disenfranchised. The transfer of wealth happens in a specific direction in accordance with the power struggle between the revolution’s opposing parties. The French Revolution was a confrontation between an old regime of nobles and ecclesiastics on one side, and the Bourgeoisie and working classes on the other. Accordingly, the nobles and the Church lost considerable wealth to the winners. Of course, the Bourgeoisie was the biggest winner, but the general population’s gains were secured by the new republic which took control over new possessions in the name of the people.

The Tunisian revolution has not played out on similar social grounds, that is to say, a clash between two different social classes. It is intrinsically and essentially a confrontation between the population and the state. Tunisians amalgamate all state institutions and agents with political rulers. Thus, Ben Ali’s crimes and violations are not to be blamed on his regime alone – i.e. close collaborators and henchmen – they are rather to be blamed on the state itself. It is interesting to note that Tunisians use the same word to refer both to policemen and judges. In fact, the word “hakem” (meaning arbiter or ruler) is broadly used to refer to anything related to the authorities. For example, streets and public buildings are said to be properties of the hakem. It is not possible here to explore the origins of this particular political organization. It could go back to the historic position and role of the state in Muslim societies, as explained by Wael Hallaq in The Impossible State. According to Hallaq, unlike the modern state, the state in Muslim societies is an external and changing force with which people have to deal. It may also have to do with alienating effects produced by the post-independence state, since during the French protectorate Tunisians clearly saw their country as their rightful possession, hence their fierce resistance.

The Tunisian revolution was thus a confrontation between Tunisian society and the Tunisian state as an abstract entity embodied in its material possessions and some of its agents (mainly security forces.) Since the revolution and up until recent social movements, protesters mainly attack police stations, and the offices of governors and delegates; all of which fall under the Ministry of Interior. During the revolution, looting of private properties remained marginal, especially given that the security apparatus had totally collapsed. The transfer of wealth operated along the lines of this conflict. Tunisians took possession of state properties – including lands, buildings and houses – and regarded it as legitimate to break state rules and laws. Thus, informal economy has expanded, fostered by social acceptance and state corruption. Part of the reason informal economy is tolerated is because it is perceived as mainly harming the state, while benefiting poorer citizens by allowing them access to cheap goods. The awareness that state finances and possessions are, in fact, public properties is emerging, but is still very marginal.

Understanding the main actors of the revolutionary struggle is essential to understanding the revolution. This understanding supports the idea that the Tunisian revolution is still an ongoing process. It is built around an antagonism between the people and the state. This could explain some of the contradictions that hamper recognition of the dynamics of the revolution and the trajectory of the country. For instance, political grouplets – such as political parties and civil society organizations – have come to play a part in this large conflict, as they occupy the public scene. Despite the attention that these grouplets receive, they are far from being instrumental in the progress of the revolution. We can therefore imagine that the population’s dramatically low interest in elections and the opposition’s notorious weakness and fragmentation should have already paved the way to the return of authoritarianism. However, the long-prophesized return to dictatorship has not yet taken place. Thus, the resistance of the Tunisian revolution compared to other Arab revolutions has seemed like a historic anomaly that will soon be mended, as nothing can reasonably explain this resilience.

The reality is that the Tunisian revolution is not fought on the political and partisan scene. It is not a confrontation between the government and its political opposition, which is little more than a minor conflict, a distraction at best. From the start, the antagonism between the state and the people has been the locus of the revolution. The misunderstanding is rooted in the misconception about the revolution’s principal narrative elements, namely: the protagonist, the antagonist, and the nature of the conflict between them. As the revolution is carried out by the people and without leaders, it is difficult for this protagonist to write his own history, despite his initial victories. No other actor on the field has enough weight to enter this battle. In Egypt, for instance, the army had enough power to jump into the fray, and was able to take over the country. In Tunisia, the army not only lacks the capacity to do so, but is led by officers with a very republican mindset. In fact, when many people see the success of the independent state in constructing a good education system, more stress should be put on the creation of an apolitical army with no economic interests, manned by decent and loyal officers. This has left the two original contestants largely alone to continue the protracted struggle they began over seven years ago. And here lies Tunisia’s real and fantastic democratic potential. The country’s current movement of emancipation is fundamentally democratic. It is an organic movement, leaderless but not unideological. A collective yet unconcerted effort toppled Ben Ali. It is the fear of a similar mobilization that worries the ruling classes. Indeed, as an organic movement, such mobilization is largely unpredictable, and difficult to preempt. Traditionally, to stop a political movement, the regime can arrest or assassinate its leaders. In Tunisia’s case, the paradigm has completely shifted. The regime must face an enemy that is abstract yet almighty, namely the people. This is both the seed and proof of democracy.

The Tunisian people has a taste of liberty and emancipation. This is associated with a victory over the tyrannical state. Tunisians do not fight for liberty as a theoretical principle or a noble ideal. They defend a very concrete range of possibilities they experience in their daily lives, which does not always take positive forms. The man who builds a small kiosk in the middle of the sidewalk, the guy who sells gas on the side of the road, the smuggler who brings in goods from Libya, the farmer who illegally cultivates a land that he does not own, or the civil servant who rarely comes to the office, all these people and many others benefit from the weakness of the state. To stay in power, the ruling class has well understood this. Hence, it has chosen not to address these issues, otherwise it would risk an open war with the people who has until now the upper hand. In return, Tunisians allow politicians to play their game and vie for power, so long as they do not overstep their boundaries. However, the position of the Tunisian people is far from impregnable. In fact, the adaptability of the political system should not be underestimated. Furthermore, the deterioration of the economic situation can also sap the forces of the population – including through the immigration of its workforce and intelligentsia – and limit the prospects for future recovery. A sustainable democratic system depends largely on this recovery. However, the current ruling classes have proven their lack of creativity both in the design and implementation of daring political and economic reforms.

The erosion of political rights is also a very tangible threat, which Tunisians have disregarded so far. On this front, civil society organizations have been trying to hold ground, but without popular support, they cannot win. This was painfully experienced during the struggle to push back the reconciliation law, when very few Tunisians took to the streets. A convergence of efforts is required to take this proto-democracy to its next evolutionary phase, and make sure that it blossoms into the democracy that the Tunisian people deserves.