A building rises up at the foot of a hill that has been sliced clean as a piece of cake. In the foothills of Ennahli, the neighborhood Riadh El Andalous, bulldozers and concrete are eating away at the vegetation. A six-foot apartment building is in the works at a new construction site. A lower portion of the mountain has evidently been sacrificed for the benefit of expanding real estate property. 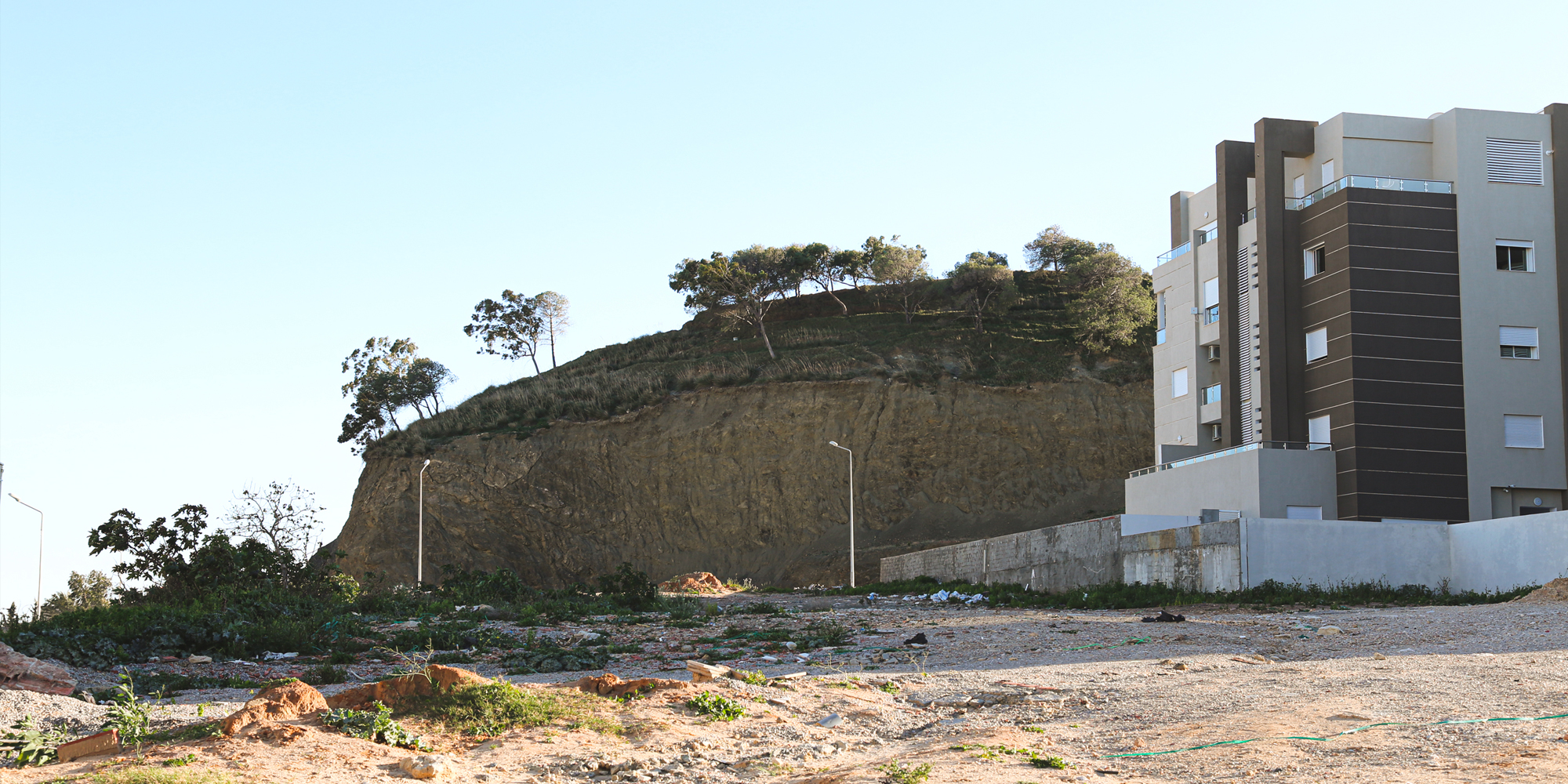 At 200 meters high, blanketed by Eucalyptus and pine forests, Jbel Ennahli and the 210 meter park that covers it are progressively shrinking. Between 1994 and 2018, urban areas gained considerable ground towards the park, with buildings invading the forested borders. For locals, the mountain is no longer accessible except through a wrought iron gate. Are developments compliant with legislation and procedures in place? Who is benefiting from the obvious environmental damage that is being caused? What are the authorities’ position in the matter? 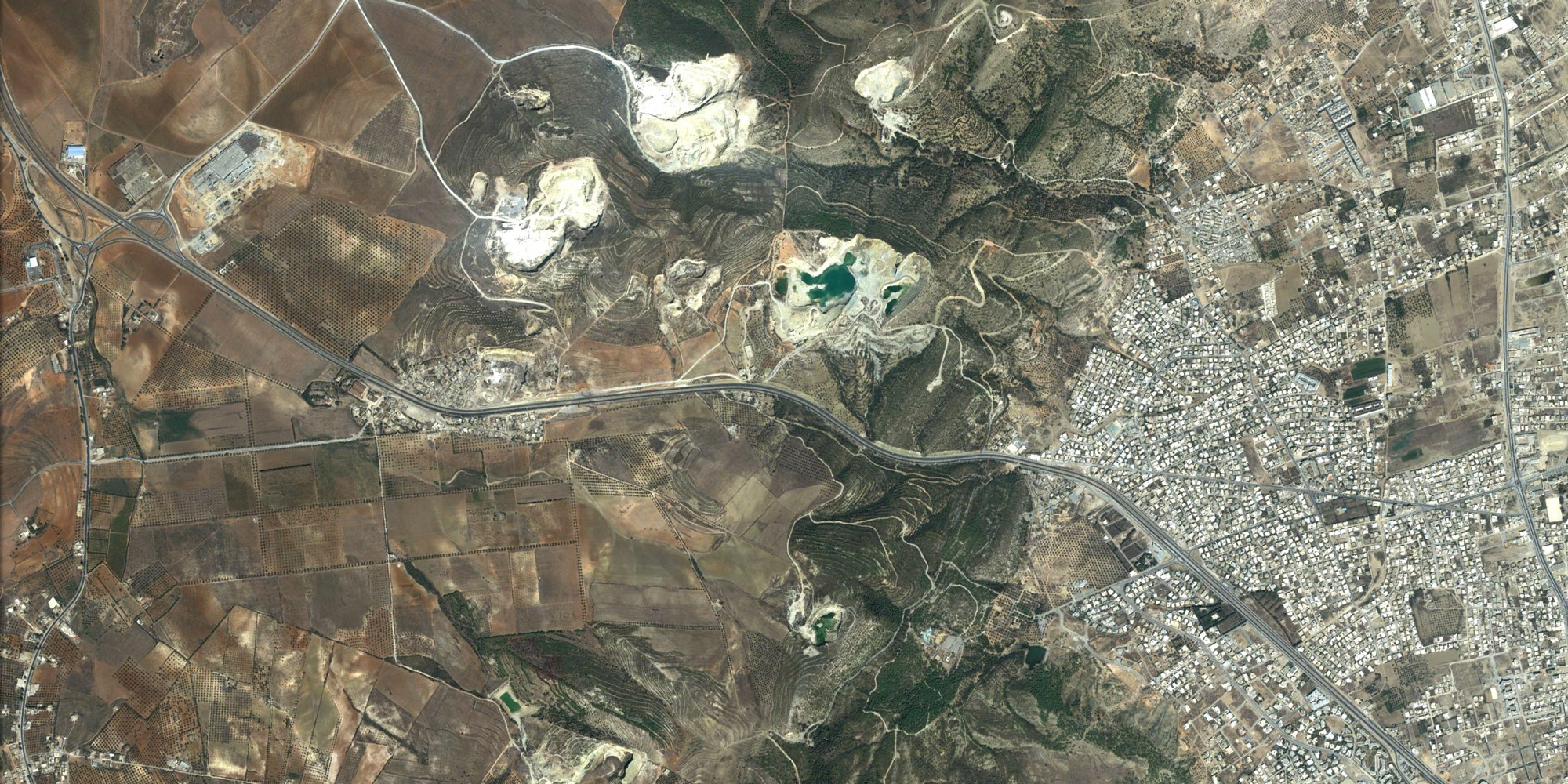 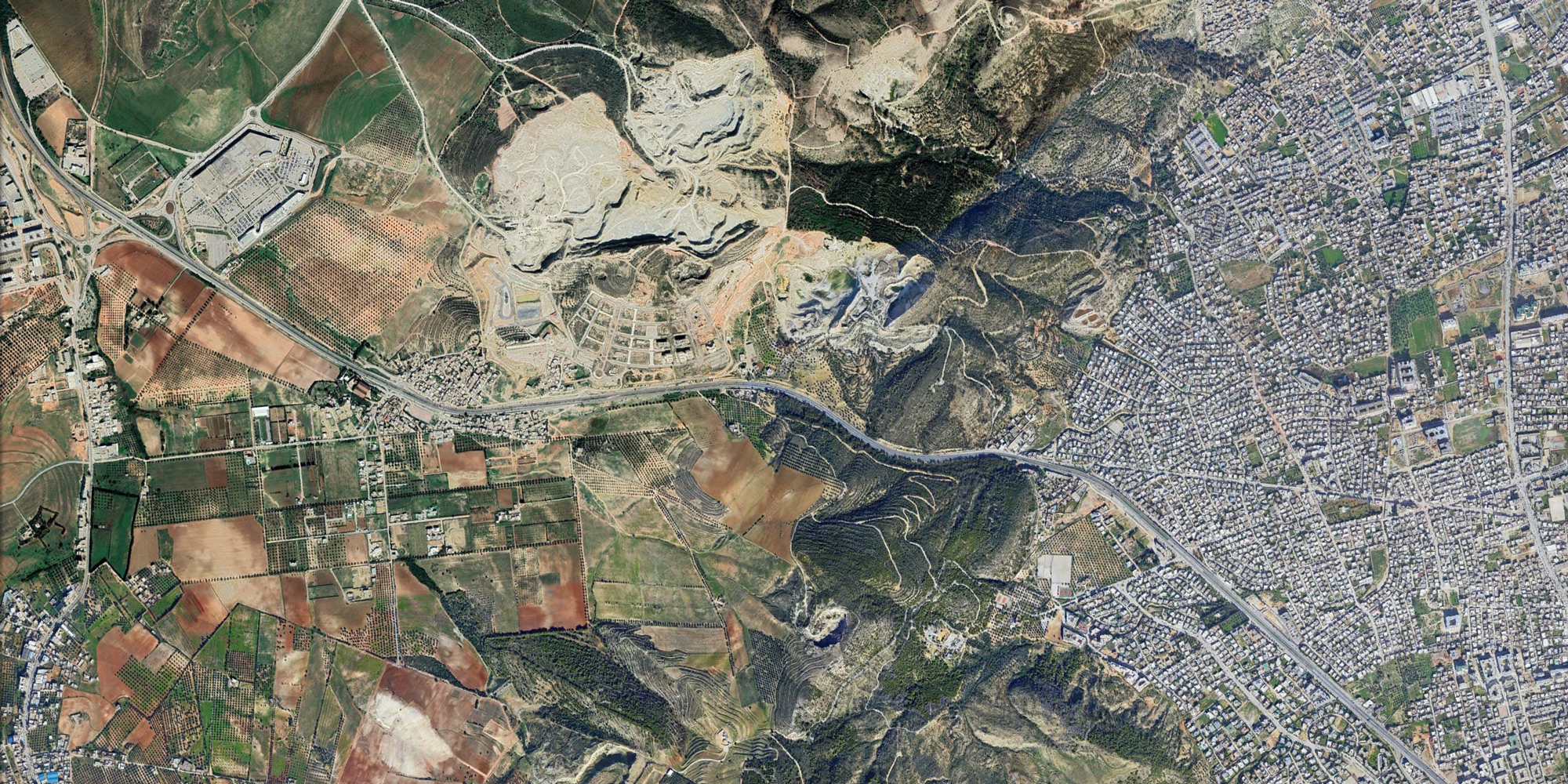 Slide from one side or another of the image to see the rapid progression of construction that took place between 2004-2019.


Concrete eats away at the mountain

Sassi Day, director of Ariana’s Regional Agricultural Development Commission (CRDA), justifies the expansion of urban areas into the unfertile lands within Ennahli park as « a necessary evil » in order to limit uncontrolled building and appropriation of state-owned lands. Given land prices in the area, however—one square meter goes for two thousand dinars—it is difficult to imagine a surge in uncontrolled building. Although just a few kilometers to the north, rudimentary buildings are indeed nibbling away at the wooded hills along the road to Raoued, Ennahli is quite a different story. Riadh El Andalous, for example, houses luxurious, high-end buildings destined for a select clientele prepared to spend upwards of 300,000 dinars on an apartment. Even if that means allowing developers to raze and block access to the mountain. 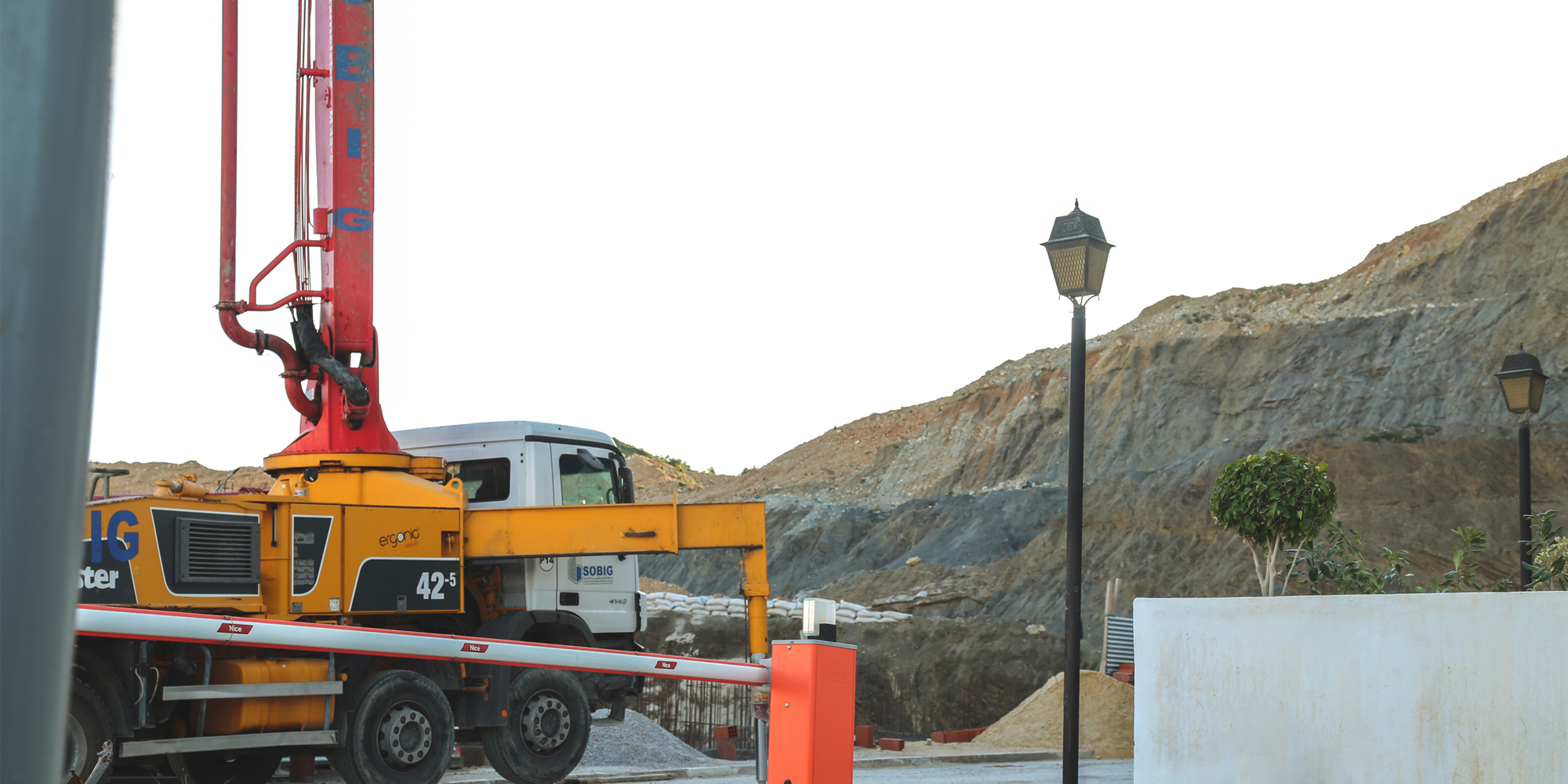 « It’s up to us to preserve the only outlet that we have left and to intensify the rhythm of reforestation in urban areas », says Mohamed Boufaroua, Director General of Forestry, with regards to Ennahli park. « Deforestation has a direct impact on carbon stores in the soil. For this reason, we’ve started to reforest 30 hectares within the park », he adds. In the same vein, Sassi Day explains to Nawaat that forests represent a natural obstacle against the spread of fires.

Even worse, haphazard construction exacerbates risk in a governorate that has experienced « catastrophic floods, the most memorable of which were in 1931 and 1973 » according to a 2011 report from the Ministry of Equipment. « Ariana is threatened by water to the west (the plains of Jbel Nahli), to the east (from the marsh to the plain) and by ground water » the document indicates. Still, the threat is not enough to stop the concrete from pouring in.

In March 2019, a real estate developer obtained an authorization to build on avenue Ibn Khaldoun in Riadh Al Andalous, at the foot of Ennahli mountain. That authorization was in accordance with Ariana’s 1994 urban development plan which then classified Riadh Al Andalous as a « low-density individual housing area ».

Development plans are updated and examined by a commission made up of local authorities, the Ministries of Equipment and Agriculture, the General Direction of Forestry and the concerned CRDA. For Ariana’s development plan, Sassi Day regrets the « massive » urban spread of Greater Tunis. « No one can deny the increasing number of buildings in Greater Tunis. During the revision of the development plan in 2017, we fought to save the forests », he is pleased to tell us before adding that « Getting the development plan approved doesn’t happen overnight. It took 20 years for urban areas to expand. Our main role is to preserve the forests », he points out. 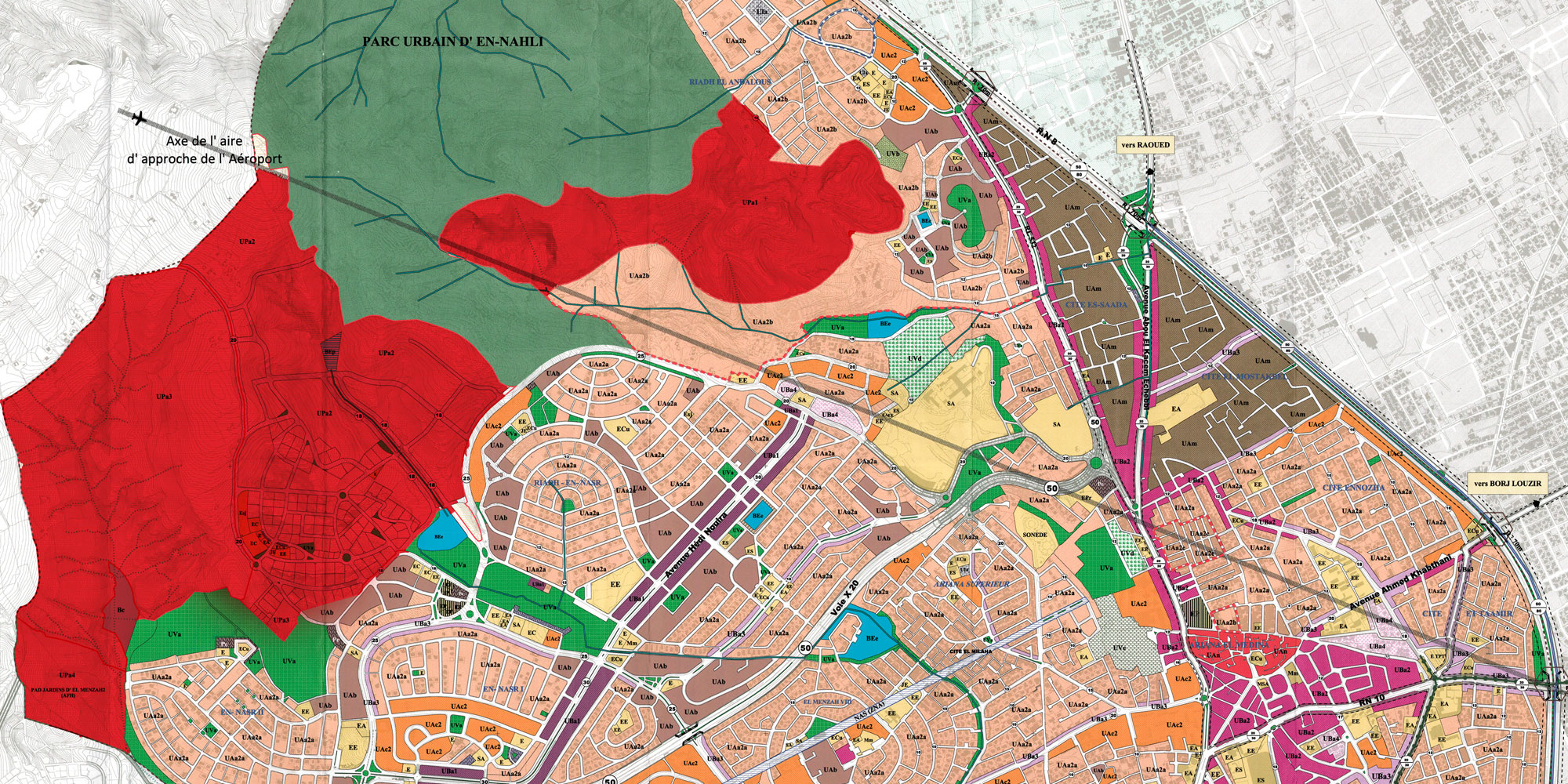 Day assures us moreover that the buildings on the outskirts of Ennahli park are legal. « Ennahli’s borders, Rous El Harayek and Ennasr, are either private property or part of private state property. There is no threat to national forests. Random expansion of buildings in plain sight of authorities is not possible », he affirms. 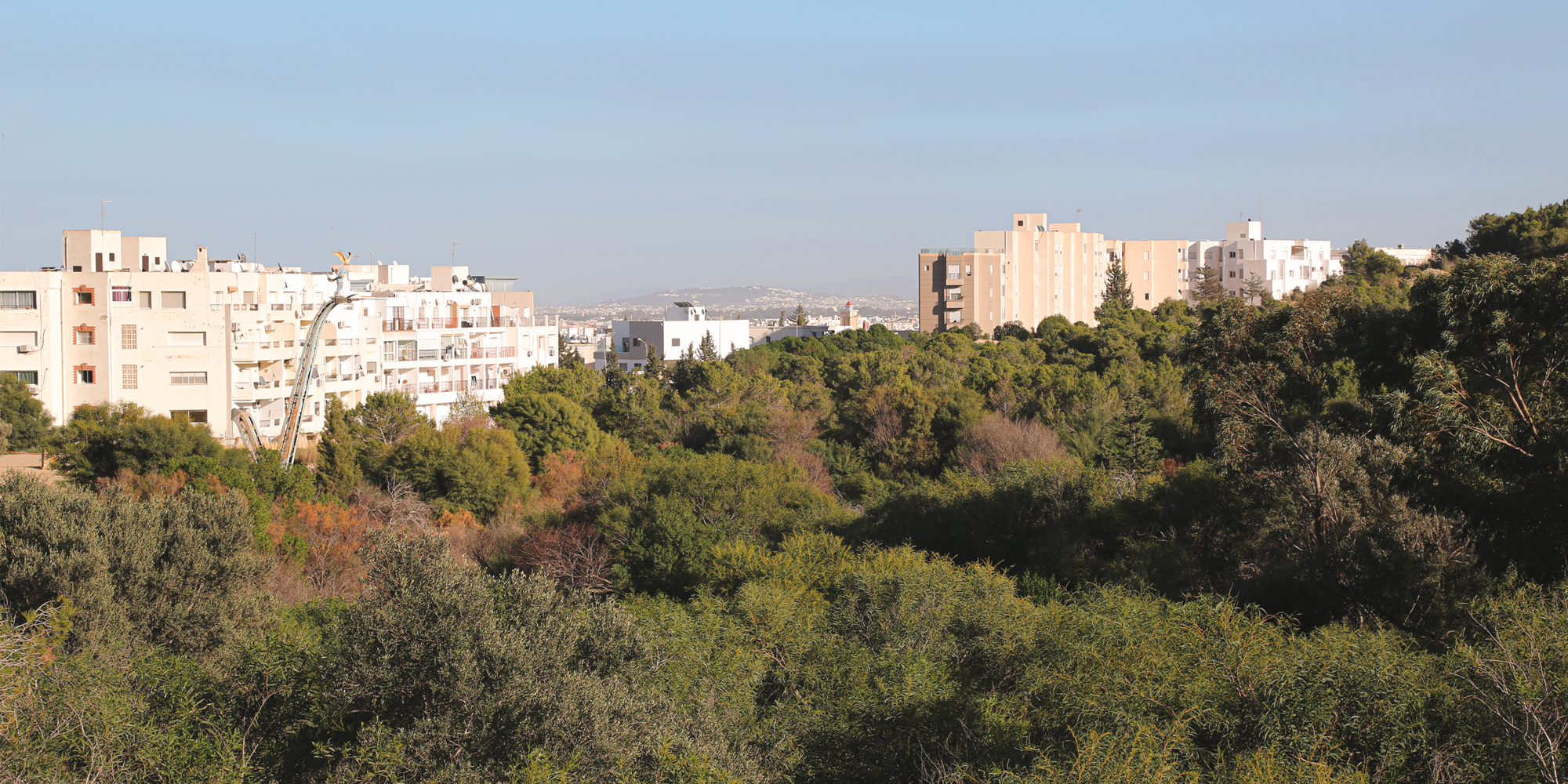 Mohamed Boufaroua notes that the land surrounding Ennahli is no longer part of the state’s national forests. He furthermore observes that the problem lies with the registration of forests at the the General Direction of Forestry. « We cannot delineate the entirety of forest area at a national level. This requires means we don’t have. One million hectares of forest area are still not registered. Only 500,000 hectares are registered at the General Direction of Forestry », Boufaroua tells us.

Sassi Day says that there have been a number of illegal attempts to cut down trees on state-owned lands since 2011. In the meantime, fires continue to ravage the region’s forests. « Fires were started at Sidi Amor in 2019 and Djebel Ayari in 2014, but we quickly contained them and have begun the reforestation of damaged lands. We planted Aleppo pines on 23 hectares at Djebel Ayari » he continues. But the initiative falls short of stopping speculators and other real estate developers, as concrete continues to desecrate the mountain with impunity. 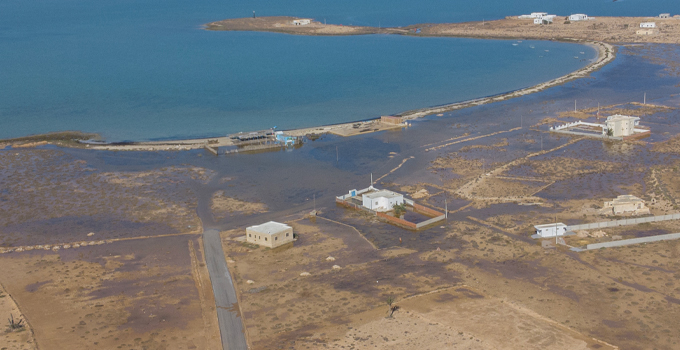 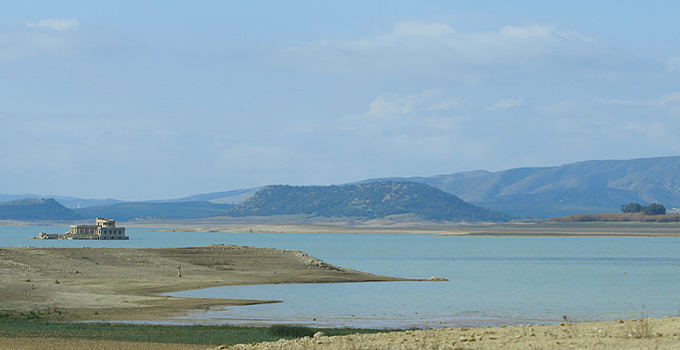