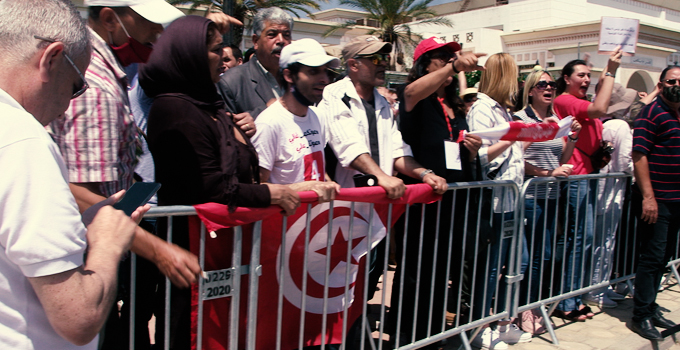 Tunisia can be considered as the only country to walk out of what came to be known as “the Arab Spring” with a democratic system of governance and a strong sense of civil and national duty. Countries like Libya, Syria, and Yemen are still to this day torn apart by internal conflicts and civil wars. An essential element in the exceptional Tunisian success in establishing an institutional and a civil democracy is the unity of its people during the Tunisian Revolution. Unlike Libya and Yemen, Tunisia did not succumb to tribal conflicts due to the fact that the Tunisian people was not driven by tribal agendas. In addition, Tunisia stood strong in the face of all terrorist threats and all attempts of infiltration by terrorist groups. Tunisian defense and security sectors sacrificed many lives in their attempt to avoid a scenario similar to the one that took place in Syria. During times of distress, the Tunisian people showed more unity than division. This is perhaps the most critical element that allowed the Tunisian Revolution to avoid any prospect of civil war and terrorist infiltration. Almost ten years after the Revolution took place, however, the new political scene that has since emerged in Tunisia is creating social friction and a division amongst Tunisians. This article attempts to provide an analysis of this prevalent social friction based on the theory of group polarization, while shedding a special light on the current political events that are shaping Tunisian domestic affairs.

It is important to understand the theory of group polarization before applying it to the Tunisian context. In his essay “A Case Study in Group Polarization”1, Professor Cass. R. Sunstein provides a simple and sufficient explanation tackling the theory of group polarization. Simply put, this theory contends that group deliberations in regards to any given topic create more division than mutual understanding. When two groups holding different or opposing stances deliberate and argue about the topic on which they differ, their deliberation results in the members of those groups holding more radical opinions based on what they already believe in.

Let’s take the example of two groups holding two different opinions about the issue of secularism. Group A believes that the state should be secular, whereas group B contends that religion and state affairs are complementary. When group A and group B debate and deliberate about this issue they are expected to reach mutual understanding and a greater level of open-mindedness towards each other. However, the theory of group polarization maintains that the result of such deliberation is that group A and group B acquire more essentialist and more radical opinions of what they already believe in. In the sense that group A will come out of this discussion thinking that religion should be definitely eliminated, while group B will come out thinking that religion should be definitely incorporated within state affairs. Therefore, members of both groups acquire more radical stances that serve to widen the gap between their ideas and beliefs. This in turn results in the polarization of both groups and in the absence of mutual understanding and alternative thinking.

This polarization eventually results in social friction which affects the way in which the average citizen perceives the issue being tackled by both groups. The average citizen starts perceiving certain matters from the perspectives perpetuated by the two polarized groups. He then identifies with one group and believes that by doing so he must automatically reject everything proposed by the other group. This is because people start thinking there are only two possible ways in which they can deal with the issue tackled by both groups. Either the way proposed by group A, or its opposite, proposed by group B. This eventually results in labeling people and pitting them against each other. One might then ask: How is this relevant to the Tunisian political milieu? It is to this matter that we shall now turn.

During the Tunisian revolution there was no apparent division characterizing the people who went out to the streets demanding a regime change. Demands for freedom, democracy, and dignity took precedence over any tribal loyalties or ideological preferences. Shortly after the revolution, a multitude of political parties occupied the political scene in Tunisia and participated in creating significant ideological diversity. Social liberties and the freedom of political affiliation encouraged people to become more politically active and to acquire ideological and political stances. It is perfectly true that too much freedom often leads to chaos, and Tunisia has had its fair share of that. But it is also undeniable that political pluralism and a multi-party system are two essential and elementary principles in the functioning of modern democracy. The struggle of maintaining a certain level of balance between freedom and chaos exists in almost all democratic countries. It can even be considered as a sign of a healthy democracy.

However, the latest parliamentary deliberations in Tunisia started showing signs of a polarized political scene rather than a diverse one. The deliberations and political confrontations between the Free Destourian Party and Ennahdha have occupied a major spot in mainstream media and all social media platforms. Ennahdha, the Islamist party with a majority in the current Tunisian Parliament, managed to secure the Parliament’s Speaker position for its leader, Rached al-Ghannouchi. Whereas the Free Destourian Party succeeded at securing 17 parliamentary seats and has positioned itself in the opposition following the lead of its most prominent figure, Abir Moussi. This resulted in a direct confrontation not only between both parties but between their leaders as well. The Free Destourian Party portrayed itself as the one and only party that is willing to oppose Ennahdha through showcasing their parliamentary interventions and adopting a radical stance in rejecting all ideological and political preferences perpetuated by the Islamist party. Whereas Ennahdha maintained its position as the leading Islamist party in the Parliament and managed to form a governmental coalition with a number of other parties. Consequently, this created several political confrontations that took place on live television and acquired large coverage on mainstream media and social media platforms. Such political antagonisms succeeded in occupying a major spot in the everyday life of the average Tunisian citizen.

The deliberations and debates between Ennahdha and the Free Destourian Party culminated in an outcome that is remarkably similar to the one advocated by the theory of group polarization. After several months of debate, confrontation, deliberation, and argumentation both parties managed to widen the gap between their supporters. Their continuous confrontations created a new atmosphere of debate within the Tunisian public. This debate revolved around whether people should support Moussi and her Free Destourian Party or Ennahdha and their Islamist agenda. The possible existence of an alternative path was not addressed. Supporters of both parties found themselves adopting more essentialist and more radical stances towards each other. Those who oppose Ennahdha automatically identified with Moussi and supported, if not adopted, her doctrine, while those who supported Ennahdha perceived Moussi as their one and only political rival. A number of Ennahdha supporters perceive Moussi as a threat to their very existence. Group polarization became evident beyond any doubt when the Tunisian Parliament blocked a motion against foreign intervention in Libya. Those who voted alongside Moussi’s Party, and in favor of the motion, were automatically labeled as anti-Ennahdha., whereas those who voted in a manner different to that of Moussi’s Party, thus, against the motion, were labeled pro-Ennahdha. No alternative interpretation was allowed to surface as if there was only this dichotomous way of analyzing voting behavior. In fact, social media platforms witnessed a surge of people arguing that any party voting against the motion is necessarily “in bed” with Ennahdha and its regional agenda. The Tunisian public sphere was then polarized between solely two alternatives; one can either support Moussi, or be labeled pro-Ennahdha.

This presents a dangerous precedent that negatively impacts the democratic nature of the Tunisian political milieu. It marginalizes a multitude of opinions, limits individual agency, and potentially eliminates all prospects of free association. It also paves the way for a political scene dominated by two parties, two ideologies, and two agendas. Current events strongly support such presumptions. But the time is still early to make any final conclusions.