“We are not calling for increases in wages or anything, we are calling for our protection,” Amél Mill, a midwife in the Ariana family planning health facility, told Meshkal/Nawaat on the sidelines of Tuesday’s protest. Mill told Meshkal/Nawaat that as Tunisia is facing its second wave of infections in the Covid-19 pandemic, healthcare workers have to perform their daily duties with no protective gear. 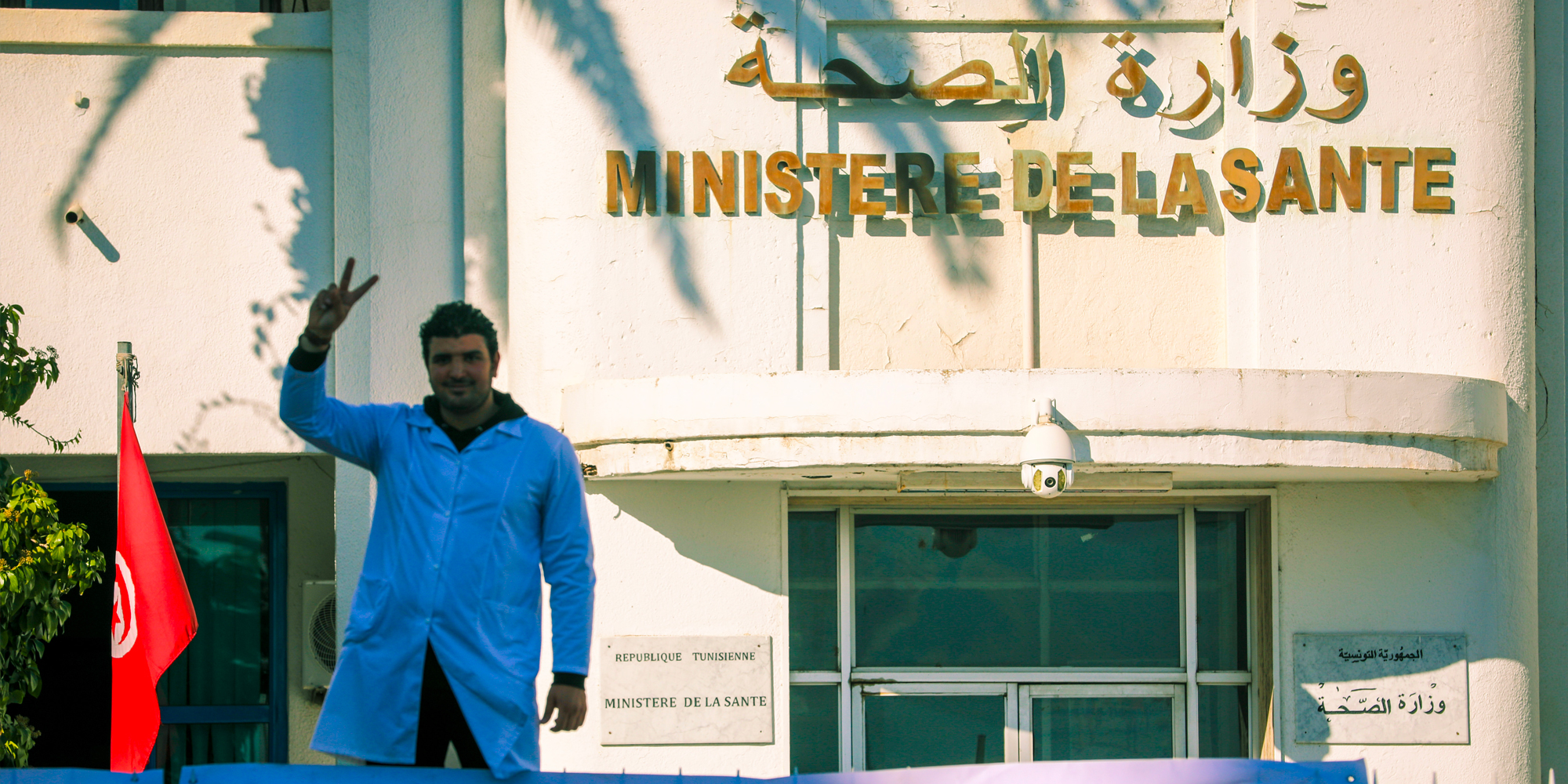 Hospitals are running out of necessary items such as masks, blouses, gel etc… Meanwhile the authorities are practically absent… This day of rage is not only for us as healthcare workers but for all citizens,” “As frontline workers, not only do we have to assume the results of the ministry’s slacking but also the people’s anger because of inadequate healthcare facilities.
Mill added.

Protesters see Aloui’s death as evidence of a systemic failure by public authorities to invest in proper healthcare facilities, equipment and infrastructure and have called for Health Minister Faouzi Mehdi to resign.

This incident [Aloui’s death] is the drop that overflowed the cup… the health sector’s condition in Tunisia is similar to a cancerous disease that has spread throughout the human body. This is a cry for help.
said Dr. Chokri Azzouz, a board member of Medical Association.

The situation in some hospitals, such as Jendouba Regional Hospital where Aloui died, is particularly bad. “It’s beyond catastrophic…the head of General Surgery department in Jendouba said that it’s only Badr Eddine that fell but the whole department itself is going to fall on all our heads one day,” Wajih Dhokkar, a representative of the Tunisian Organization of Young Doctors (OTJM by its French acronym) told Meshkal/Nawaat at Tuesday’s protest. 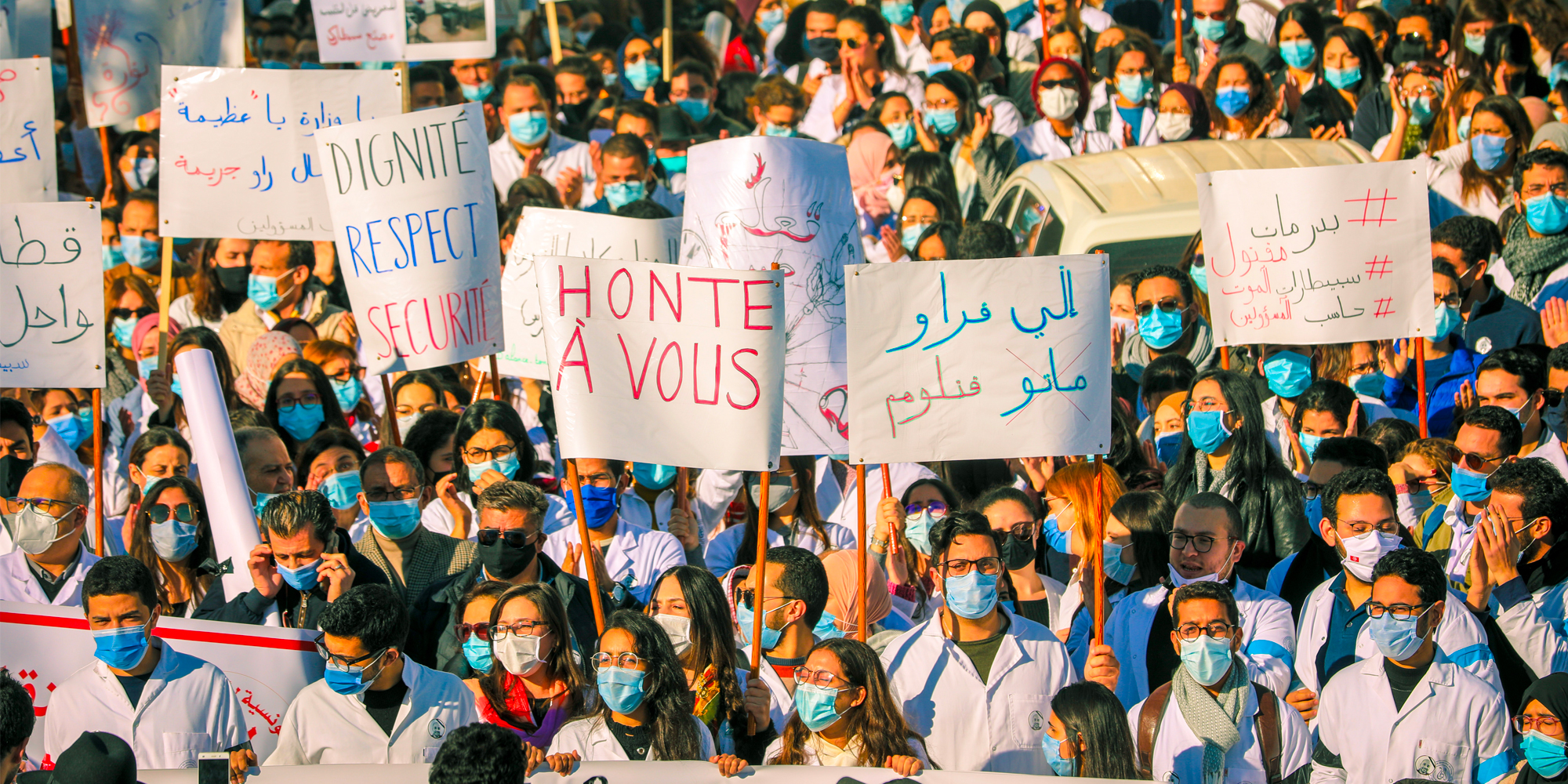 Dhokkar told Meshkal/Nawaat that doctors and medical staff in Jendouba regional hospital have been suffering from dire working conditions for a long time. “Doctors have to sleep on the bare ground when they are on call. The food is horrible and basic hygiene is inexistent in the hospital’s restrooms. As Badr Eddine’s fiancé said earlier, due to the lack of staff, Badr Eddine had to stay on call for 5 days [working 24/7 straight with little to no breaks]. So even if that accident did not happen, he could have passed from exhaustion and the amount of pressure he has been enduring,” Dhokkar added. Jendouba also lack basic healthcare facilities and staff that are needed for specialized care.

“I am a gynecologist… if you place me in a hospital in Jendouba or Siliana where there is no accompanying anesthesiologist, what work can I do?” Dr. Azzouz said. “If a woman bleeds on my operation table, what would I do with no blood bank around?”

Tuesday’s ‘day of rage’ comes as part of a strike where all non-emergency health care services and academic activities were halted on Tuesday. It was unclear whether the strike would continue another day at the time this article went to publication.

The strike, announced under the slogan of “Save your Hospital, Save your Life,” was called for through a joint statement between four healthcare professional and trade union actors: the Tunisian General Labor Union (UGTT) General Health Syndicate, the Tunisian Organization of Young Doctors (OTJM), the UGTT’s General Syndicate of Public Health Physicians and the General Syndicate for University Hospitalists and Pharmacists. 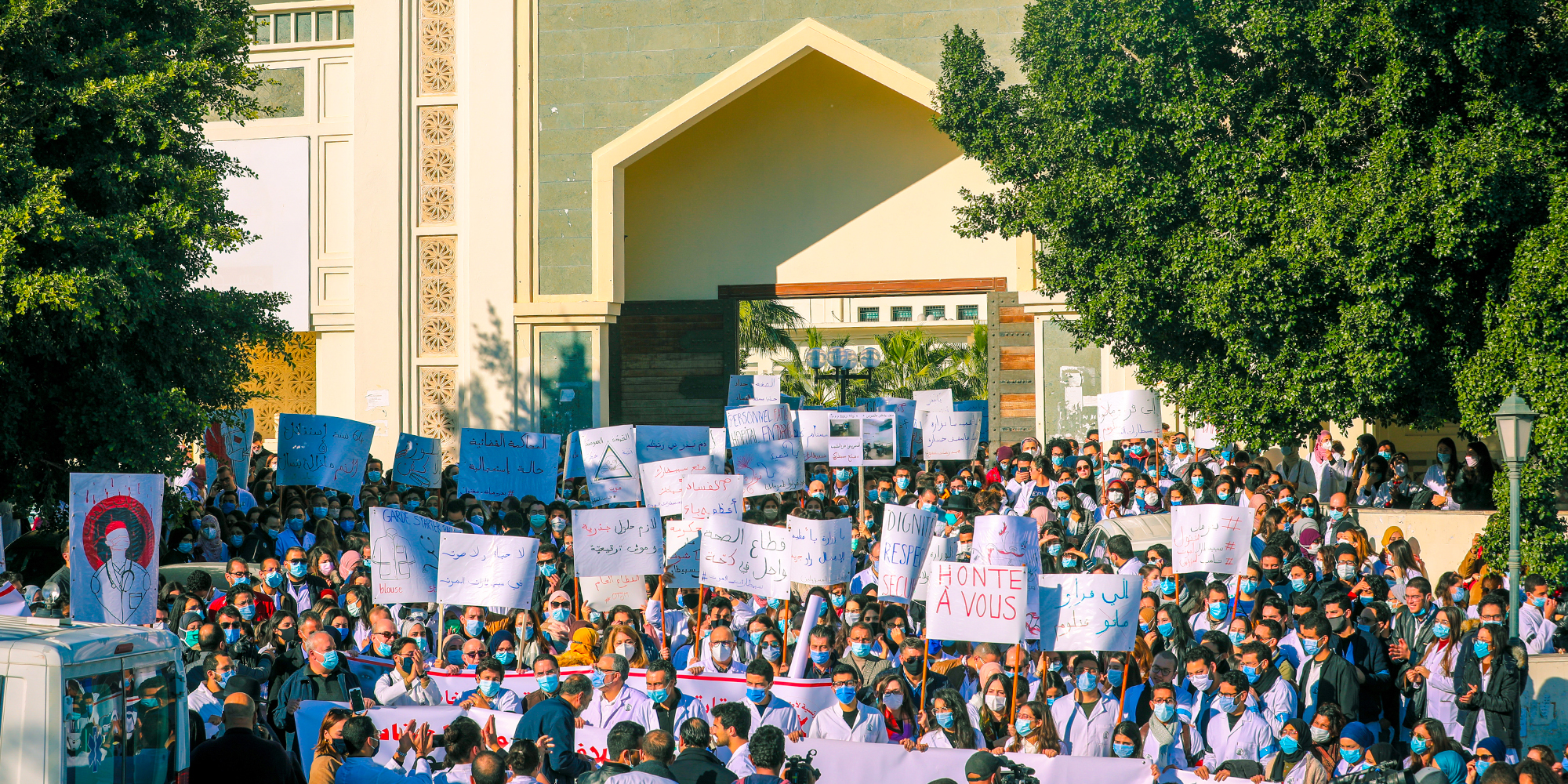 Tuesday’s protest started with a gathering at the Tunis Medical School (Faculté de Médicine de Tunis) in the morning and was followed by a march towards the Ministry of Health as a first stop and later towards the Prime Minister’s office in the Kasbah plaza.

According to a statement by the OTJM, Aloui’s colleagues are asking for the immediate punishment of the parties involved in his death, including the resignation of current health minister Faouzi Mahdi and an investigation on Aloui’s lethal accident that focuses on the role of officials. Protesters are also seeking urgent reforms in the healthcare sector, calling on the government to commit to immediately fixing basic facilities in public hospitals that represent an eminent danger to the safety and well-being of staff. 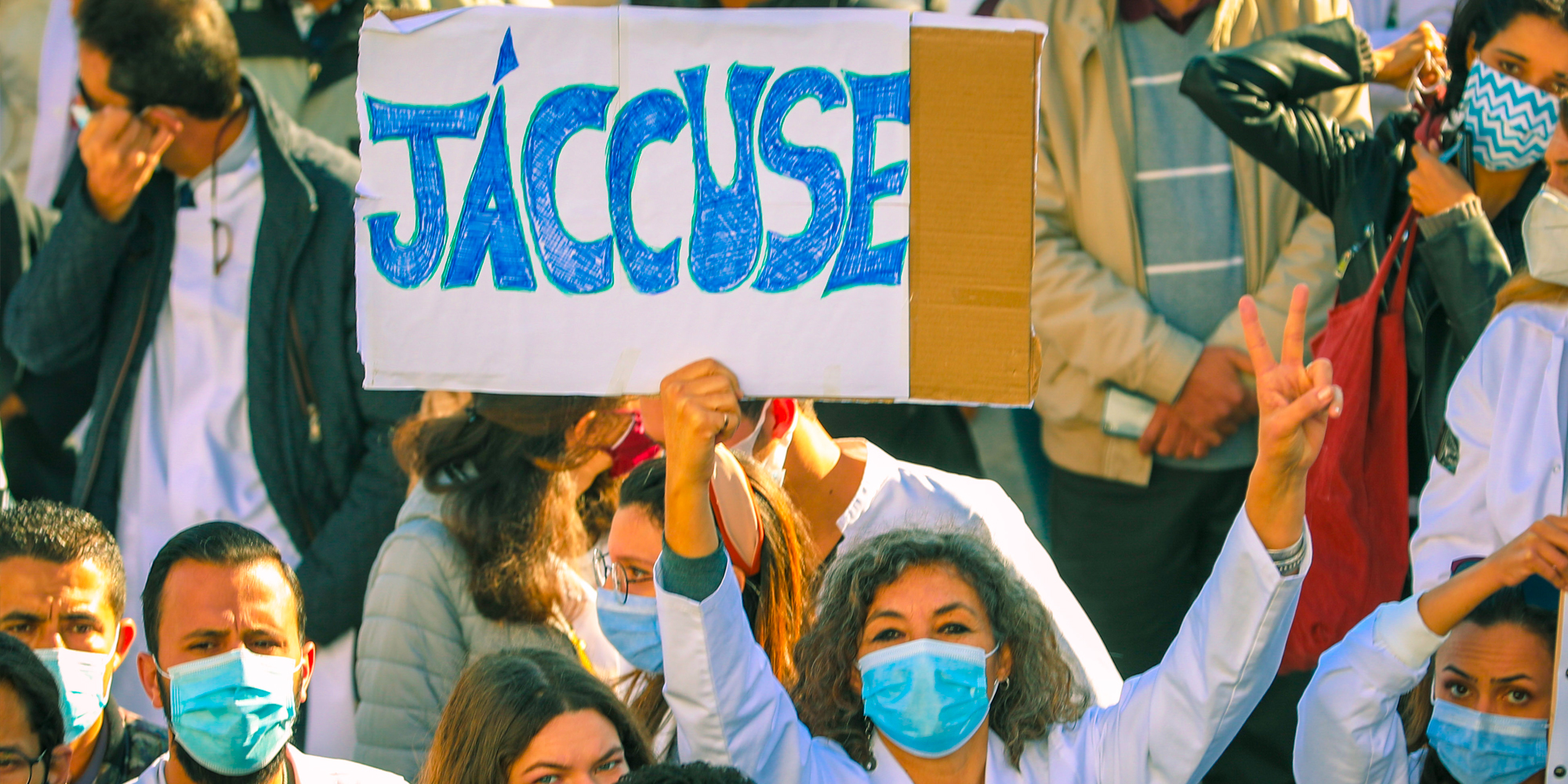 Meanwhile, the Tunisian Ministry of Health, has faced a backlash on social media networks, with many alleging negligence and corruption.

On his part, health minister Faouzi Mahdi, announced a number of measures through a statement released on December 5. These measures included the dismissal of several regional officials and the increase of maintenance work expenditures as part of the 2021 budget, to ensure safety conditions, according to the same statement.

Protesters that Meshkal/Nawaat spoke with expressed anger at what they see as the inability of officials to direct available resources to healthcare spending.

They have received many donations from within the country and outside, but we still have not seen anything,
Mill the midwife told Meshkal/Nawaat.

Top Officials Contradict Each Other on Covid-19 Funds 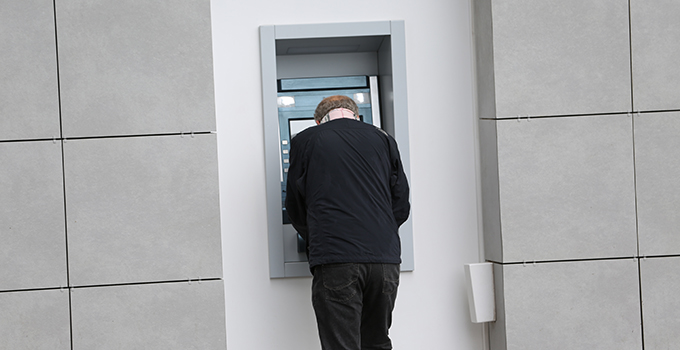 But others see funding as a secondary issue to the lack of professional management within the healthcare sector.

“We need a revolution in the health sector… money is not everything, what we need is clean hands and good governance to save our hospitals,” said Dr. Azzouz. Asked about corruption in the sector, Azzouz said that “unfortunately, many people survive off such practices.” 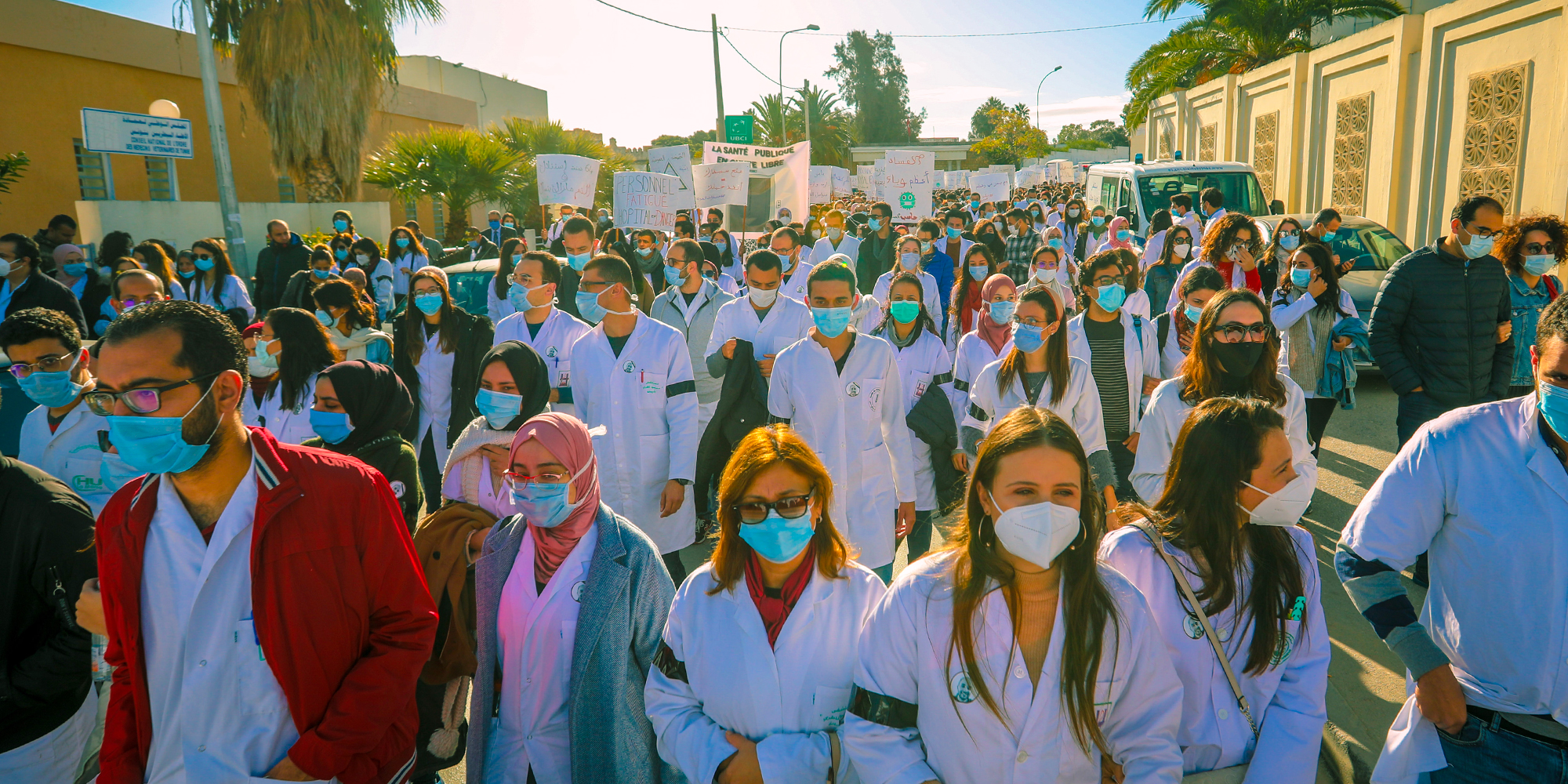 I have personally witnessed people taking public hospital equipment and walking out with it like nothing happened, without being questioned…that is public money; that is our money, Azzouz added.

According to Dhokkar, OTJM is currently in the process of formulating two proposals regarding the status of the health sector. The first proposal concerns the need to establish a national authority for saving the public health sector, where all relevant parties including OTJM can be involved in the reform process. 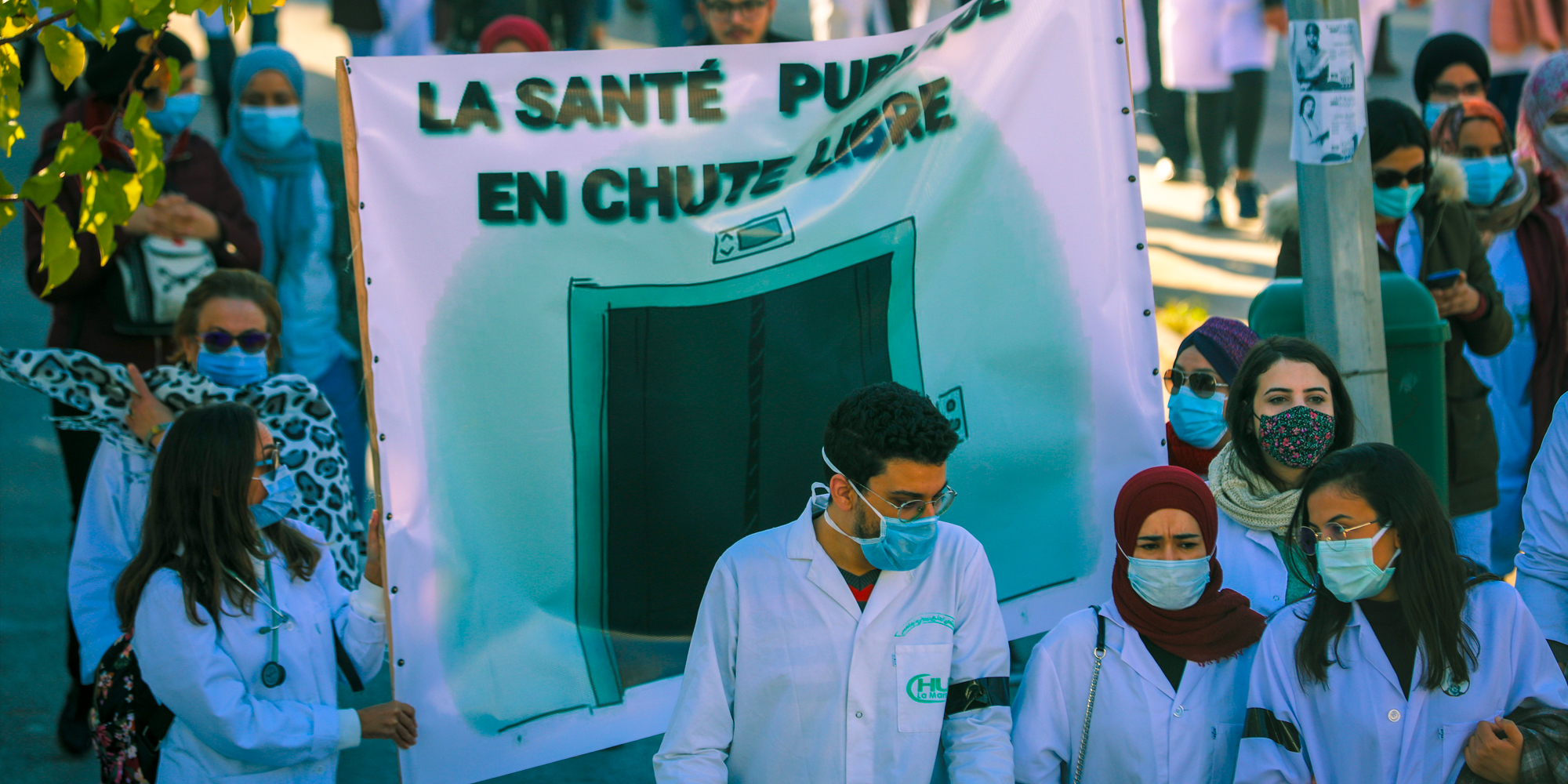 As for its second proposal, OTJM is calling for drafting a report that assesses the status quo in Tunisian public hospitals.

We will be presenting this report to the Prime Minister’s office, and we will be demanding they commit to fixing the major deficiencies that exist in our hospitals-especially those that relate to the safety of healthcare workers- one month from now,
Dhokkar told Meshkal/Nawaat.

Dhokkar added that while officials have conceded to previous demands that medical workers get a break after 24 hour shifts, this has not been implemented in practice. Dhokkar believes part of the reason is discrimination towards younger medical staff. “Such decision is not being applied because of the condescending view that many hospital directors have towards young doctors…labeling them as low-waged workers who must perform more than what they can endure,” Dhokkar said.

Dr. Azzouz also pointed to this issue of discrimination and poor working conditions, arguing that they are even more important than resources and pay in explaining why so many young Tunisian doctors emigrate.

“80 percent of young doctors are leaving the country because of this… after years of training in our medical schools they get snatched by other countries such as France and Germany,” Dr. Azzouz said. “It’s not a matter of better money but rather a matter of working with dignity and receiving respect.”