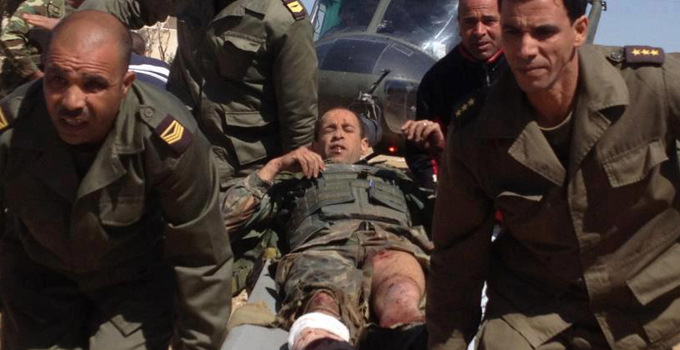 Since the beginning of the month, the hunt for al-Qaida-linked militants in Mount Chaambi, a region near the Algerian border, has instilled widespread anxiety and fear among the population. At least 17 soldiers and police have been seriously injured while searching for militants during the past few days. And back in December an encounter with the group costed the life of a young national guardsman.

According to interior ministry spokesman Mohamed Ali Aroui “There are two groups, one in the Kef region with around 15 people and the other in Mount Chaambi with around 20 people.” the militants had introduced a terrible weapon this time: the evil land-mine. Four of them had exploded last week in the Mount Chaambi region. One of the injured soldiers told Tunisie Numerique that “the militants “built a small town where they set up training camps”. Officials have suggested that the armed groups come to occupy roadless and isolated borderlands as a base to launch their attacks.
It is evident that Tunisia brought on itself the rise of fundamentalist groups, taking advantage of the general disorder to promote their agenda.

Hardliners managed even to back arm struggle outside of Tunisia notably in Syria. Salafi violence has been sporadic and continuous in the last two years culminating with the deadly assault on the U.S. embassy on September 14, 2012. Human Rights Watch, among other watchdog groups, has criticized the lax attitude of the Troika government to curb the tide of violence acted out against artists, politicians and secular Tunisians, living more in the here-and-now world.

In an interview with the French newspaper Le Figaro published in September 2012, the Tunisian president, Moncef Marzouki, said he felt “overwhelmed, shocked, hurt and outraged” by the prominence given in the French media to Salafist violence. The wave of violence in Tunisia reached its height with the February assassination of the Leftist leader Chokri Belaid. Unfortunately, the President did not foresee the consequences of underestimating the dangers of extremist groups and it turned out that terrorism at home was no illusion.

On Tuesday, the President Moncef Marzouki, visited the Jebel Chaambi region, accompanied by the commander of the Joint Chiefs of Staff, Rachid Ammar. He declared with a shaken tone among that “the terrorists shall not pass.” Marzouki’s comments reflected nervousness. Suddenly he came to realize the seriousness of the situation: threat of jihadi contagion from neighboring countries is more than real. According to the Presidency of the Republic’s Spokesman Adnan Mansar the aim of the visit is “to assess the situation on the ground and support the army units and the security forces in their hunt of the terrorist group.”

One thing is certain when it comes to the leader of the Ennahda Party: The Al-Qaeda threat was worse under Ben Ali. Despite the deteriorating security situation. Ennahda leader Rached Ghannouchi puts the finger of blame on the media and “certain people”. “The newspapers and certain people are saying that Tunisia is heading towards civil war. Terrorism in Tunisia cannot transform itself into civil war. That [claim] is an exaggeration and not objective.” In the press conference, the veteran leader of Ennahda, which heads Tunisia’s coalition government, stressed that “there is no place for Jihad in Tunisia, except the jihad that promotes development and spreads goodwill.”

The more radical and less compromising faction of Ennahda party had a different understanding of the recent terrorist incidents – which are new to many Tunisians. Sadek Chourou, senior Ennahda leader, called for dialogue with the jihadis while blaming social justice militants: “Those who cut off roads and railways, paralyze the work of factories and mines and set fire to the public utilities in Tunisia during recent months are pockets of apostasy that seek corruption on the land.” Back in January 23rd 2012, Sadek Chourou called explicitly the Constituant Assembly for the hadd (sharia punishment) against protestors.

After the unrest in Mount Chaambi and in other regions, the Government intensified its crackdown on the extremist groups. Fugitive leader of Tunisian salafists Jihadi movement Ansar Acharia, Seif Allah Ibn Hussein, aka Abu Iyadh, threatened to fight back mercilessly. “To the tyrants who think they are Islamists … know that the stupid things you are doing are dragging you to war,” said Abu Iyadh. As the Tunisian army is intensifying the hunt for two groups of jihadists on the Algerian border, violent clashes erupted at numerous sites between hardliners and government forces who tried to disperse unauthorized Salafist meetings. “If you [the government] continue with these stupid policies, the support of America, the West, Algeria, Turkey and Qatar will not save you when the sound of swords makes itself heard,” added Abu Iyadh in a message posted online.

According to Tunisian Foreign Minister Othmane Jarandi, some 800 Tunisians are fighting alongside Islamist rebel ranks in Syria. However, the exact number of Tunisians fighting inside Syria cannot be known since several people left the country illegally. The interior ministry said that border controls had prevented the departure of some 1,000 Tunisians headed for Syria. Diplomatic relations between Tunisia and Syria were severed in February 2011. The Tunisian leadership broke off relations with Damascus over the Syrian government’s crackdown on its people. The move, however, made the repatriation of Tunisians living in Syria more difficult. Surprisingly, the minister reassured all that “The repatriation of Tunisians can be facilitated by the embassy in Lebanon after the government makes contact with the Syrian authorities about imprisoned Tunisian citizens.”

Since the 2011 revolution, the Salafists and other hardliners have pursued the most violent approach to impose their doctrine on the Tunisian society. The authorities have blamed them for the attack on the US embassy last September and the murder of leftist politician Chokri Belaid in February.