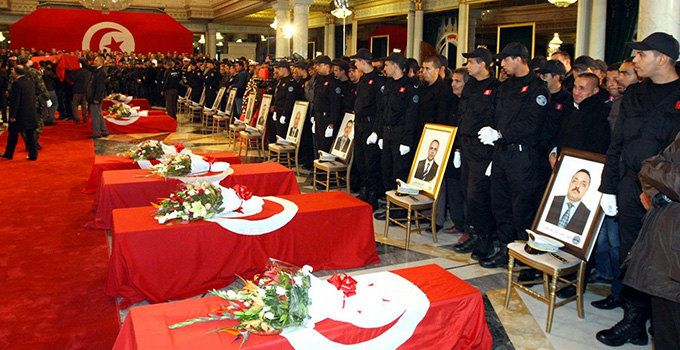 One week after Fadil Aliriza elaborated how counterterrorism efforts might undermine Tunisia’s revolution, the course of events following the November 24 attack in the capital have provided a case-in-point. In seamless consistency with the government’s response to the Bardo and Sousse attacks in March and June, official discourse, superficial security measures, and the actions of security forces since last Tuesday’s tragedy reflect the absence of a comprehensive counterterrorism strategy and have kept alive the notion that effective security requires the relinquishing of certain rights and liberties.

The Press: another victim of terrorism

Just before 5 o’clock on Tuesday, November 24, a young man boarded a bus designated for the presidential guard, and detonated the bomb he wore strapped to his body. 12 members of the presidential guard as well as the bomber were killed in the explosion. Chaos ensued as the police, journalists, and citizens flocked to the street perpendicular to Avenue Mohamed V. Police quickly worked to disband the crowd, including members of the press, in spite of the latter’s efforts to avoid interfering with the work of security forces. Journalists claim that they were nonetheless methodically and aggressively dispersed by plain-clothes security agents. Several were wounded and transported to the hospital; one reporter was arrested and, before being released, the material on his camera erased. 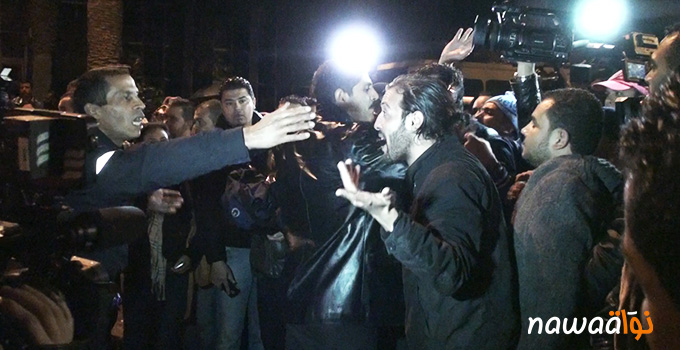 «We have a surplus of useless liberties»

National television programs did not gloss over the police aggression in the hours following the attack—indeed, they justified it. One after another, analysts, journalists, and public figures invited to speak on El Hiwar Ettounsi, Watania, and Nessma dismissed or categorically denounced discussions pertaining to human rights in the face of such grave security threats. «We have a surplus of useless liberties», announced Mustapha Ben Ahmed on El Hiwar; «Absolute power must be given to authorities in order to combat terrorism. It’s not worth attacking us on human rights. Nobody can give us, the media, lessons concerning this question. We are in the first line of defense of human rights», Bassel Torjeman insisted on the same program. Throughout the evening, interlocutors not only trivialized violence, but anticipated and condoned it: « Sometimes, in these kinds of situations, it occurs that security forces arrest and beat up a poor innocent citizen. We respect police agents and we give them the benefit of the doubt in this context…» declared Borhen Bsaies on Nessma.

Civil society and international organizations responded immediately, condemning the treatment of journalists in the aftermath of the explosion. On November 25, the National Union of Tunisian Journalists (SNJT) warned against «the instrumentalization of the war against terrorism to restrain journalistic work»; the Tunis Center for Freedom of the Press published a list of the 30 journalists who had endured police aggression; the Tunisian League for the Defense of Human Rights (LTDH) criticized «the manipulation of public opinion which targets human rights activists and reclamations against the liberties of Tunisians and against union action» and called upon the HAICA «to undertake the necessary measures in order to guarantee an audiovisual landscape that respects the constitution and the law, the best safeguard against the return of the dictatorship».

The HAICA did indeed respond, though not to the reclamations and demands articulated by press unions and human rights associations. In a public statement issued on the same day, the Authority called upon journalists to exercise «self-control and respect for professional norms and journalistic ethics» and recommended «avoiding buzz via direct diffusion, susceptible of putting in danger individual security and hindering the proper implementation of security operations».

Prime Minister Habib Essid’s national address following the meeting of the council of ministers was marked with a similar tone and appeal to the public to facilitate the work of security forces. Echoing the declarations made following the previous two terrorist attacks, Essid called for the unity of political parties, national organizations, and civil society actors, deliberating that sacrifices must be made not only by the government and security forces but also by «all dynamic forces of the country». He compelled Tunisians to respect the state of emergency and curfew and that to this end «the counterterrorism law will be applied down to the letter, without any leniency».

Counterterrorism Law of 25 July 2015
Proposed in the weeks following the Bardo Museum attack and adopted one month after the attack in Sousse, the country’s new counterterrorism law is the epitome of a misguided debate around laxity against despotism, security versus human rights. After Essid signed the draft law and it was submitted to parliament for review, political figures and human rights advocates voiced concern over the measure’s significant flaws. Among the more widely criticized features were the broad and ambiguous language defining “terrorist activities” and “apology to terrorism”; provisions allowing for a pre-charge detention for up to 15 days (as opposed to a total of 6 under the previous law), and the death penalty. Dozens of civil society organizations called upon decision-makers to include measures that would prevent violations during detention, guarantee the right to a fair trial, and ensure the protection of privacy.

«We didn’t know if they were terrorists or police officers»

While new legislative measures such as the counterterrorism law and the economic reconciliation draft law are perceived by some as a regression to repressive practices of the past regime, some laws from the Ben Ali—and even Bourguiba—eras remain at the disposal of authorities. Decree n°78-50 of 1978 which regulates the state of emergency is one such measure. As per article 8, the executive (Ministry of the Interior or governor) may «order house searches day and night and take all measures in order to ensure control of the press and publications of any nature as well as that of radio shows, film projections, and theatrical performances».

Residents of Halq al Wadi (also known as La Goulette, in Tunis), experienced the full effect of this particular measure two nights following Tuesday evening’s suicide attack. At 2 o’clock in the morning of November 27, dozens of families were startled from sleep as security forces stormed some sixty households throughout the neighborhood. Busting doors open, agents burst into homes, blinding inhabitants with flashlights, rifling through dressers, and demanding, «where are the weapons?!» recounted Monia Abid who lives in the area. «We didn’t know if they were terrorists or police officers», she told journalists. Neighborhood residents young and old related similar accounts, pointing to broken locks and bullet-holed doors and denouncing the violent intrusion of security forces into their homes as an unacceptable show of disrespect and violation of liberties. «We, as citizens, are with them…police, national guard, military…whoever they are from the State, the Interior [Ministry] …but there’s a minimum of respect at least».

A little freedom for more security

The results of a controversial poll conducted at the beginning of November suggested that a majority of Tunisians are prepared to relinquish “a little” freedom for more security. Although the choice between freedom and security may be an artificial one, it remains at the forefront of counterterrorism discourse in Tunisia, a decision that Tunisians have been asked to make with each act of political violence that has occurred in the past year. The presidency’s response to terrorism—another state of emergency, curfew, the closing of the Libyan border—appear to be yet another series of superficial security measures which fail to confront the systemic flaws of the security apparatus and which reflect the absence of a comprehensive strategy that addresses the multiple and overlapping causes of terrorism. 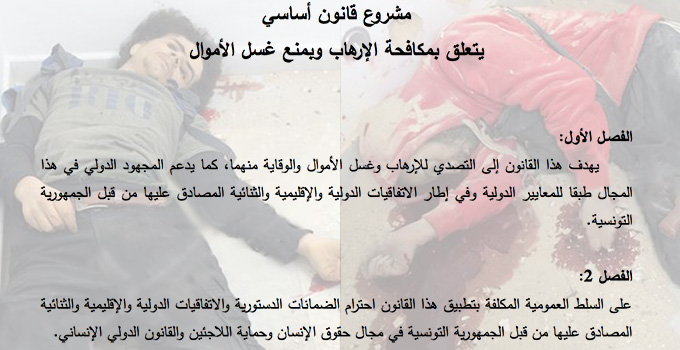