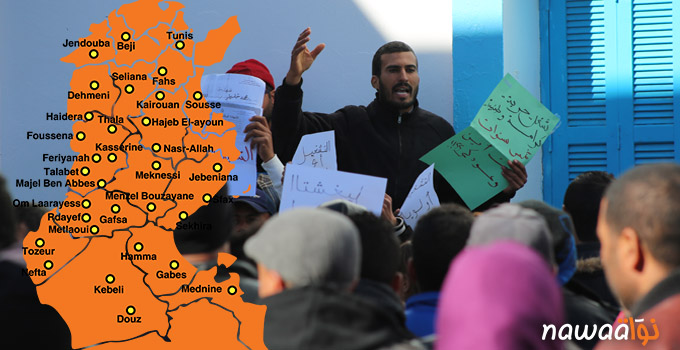 Demonstrations have not ceased since the afternoon of Saturday, January 16 when 28-year old Ridha Yahyaoui was electrocuted at the top of a utility pole in Kasserine. The death of Yahyaoui, who had recently discovered that his name had been pulled from a list of 75 candidates for employment, was the turning point in recent protests. Sit-ins have turned into clashes between protesters and security forces in cities throughout the country, and the government has once again declared a national curfew.

Tensions escalated with Yahyaoui’s death after which hundreds had assembled for a sit-in in front of governorate headquarters. Demonstrators demanded accountability regarding the list of 75 names—approved by Kasserine’s first delegate and governor—of individuals who had been promised employment six months before. On Tuesday, January 19, two protesters threatened to commit suicide by jumping from the roof of a state building.

In the hours and days since Saturday’s tragedy, social movements under the banner of the right to decent employment have turned into violent confrontations where security forces have intervened to break up gatherings in streets and in front of government buildings. By Tuesday afternoon, fourteen had been wounded and a curfew was imposed in the city of Kasserine between the hours of 6pm and 5am. The Assembly of the Representatives of the People (ARP) called for an emergency meeting with regional deputies and summoned Prime Minister Habib Essid for a hearing to elaborate emergency measures to combat unemployment; parliament also decided to send a delegation to Kasserine to prepare a report for the next parliamentary meeting.

Over the past week, the government has attempted to implement security solutions and minimize the diffusion of information concerning protests and confrontations. The presidency’s dismissal of Kasserine’s first delegate was perceived by protesters to be a long-overdue initiative. Achour Kahri, an unemployed youth from the region, sees that “the real problem is bigger than the name of a first delegate or governor; youth here are demanding the region’s right to fair and long-term development, and the ability of thousands of Kasserine’s unemployed youth to work and a decent life.”

Demonstrations were organized Tuesday night in Thala, Majel Bel Abbes, Feriana, and Thalepte, as well as Maknassy, Siliana, Beja, Sousse, and El Fahs. In Tunis, a protest was staged by the General Union of Tunisian Students (UGET) to support protesters in Kasserine. At noon on Wednesday, marchers left from Place Mohamed Ali, headquarters of the Tunisian General Labor Union (UGTT), for Avenue Habib Bourguiba where they gathered before the Ministry of the Interior. The march ended in front of governorate headquarters with demonstrators denouncing government policies that have perpetuated marginalization and unemployment.

As we write, protesters have turned out to demonstrate in cities and towns throughout the country: Al Hamma in Gabes, Nasrallah and Hajeb El Ayoun in Kairouan, Jebniana in Sfax. In Sidi Bouzid, jobless citizens, civil society activists, trade unionists, and members of the National Front set out at 10 o’clock on Thursday morning from UGTT headquarters and marched towards governorate headquarters. Similar marches took place in Beja, and Metlaoui and Redeyef of the Gafsa mining basin; movements have also swelled up in El Hamma (Gabes), Nasrallah and Hajeb El Ayoun (Kairouan), Jebeniana, Skhira, and Sfax (Sfax), Medenine; Douz (Kebili); Nefta (Tozeur), Nadhour (Zaghouan); Jendouba; Makthar (Siliana).

In Tunis, civil society leaders, UGET members assembled again on Thursday afternoon on Avenue Habib Bourguiba. On Thursday night and into the early hours of Friday morning, demonstrators and security forces in the neighborhood of Ettadhamen clashed after protesters set fire to tires and garbage. Today, Friday, January 22, 16 individuals were arrested for vandalism and the Ministry of the Interior re-instated a national curfew between the hours of 8pm and 5am.

At governorate headquarters in Kasserine on Wednesday, young sit-inners convened to issue a statement laying out their main demands and asserting their commitment to continue demonstrations until a real, radical solution is adopted to address unemployment. They announced their support for all peaceful movements undertaken while denouncing the violent security operations that have taken place. The signatories insisted that these movements remain uncompromised by political interests but open to political initiatives and government proposals for solutions. The protesters also addressed a letter to the media calling for a commitment to professionalism and impartiality in the coverage of these legitimate movements, for balanced and unsensationalized language in order to allow for a continued dialogue between concerned parties.

The government was unsuccessful in initial attempts (violent security operations and a media blackout) to stifle demonstrations. Under the pressure of a sustained and growing movement, the presidency announced on Wednesday a series of decisions including the recruitment of 5,000 unemployed individuals to public sector positions plus 1,410 to be hired as skilled laborers, as well as 6 million dinars to be invested in new programs.

These foreseeable measures were ineffective in stopping the escalation of protests in Kasserine where on Thursday morning sit-inners tore up forms the government had distributed designating work in skilled labor positions; protesters perceived the gesture as an attempt to circumvent and disregard their demands for decent work. Later in the day, Minister of Finances Slim Chaker publicly confirmed a communications error concerning the employment promises made to jobless youth in Kasserine. “We decided that 5,000 jobless citizens will benefit from different employment mechanisms,” but not, Chaker specified on Shems FM, “the employment of 5,000 jobless citizens as was presented.” He further clarified that the Ministry’s intent was not the creation of 1,410 new skilled labor positions but rather regularization of the 1,410 cases of jobless individuals currently awaiting such work.

Mainstream media and government officials have continued to perpetuate fears around security issues. A security focus has dominated media coverage of demonstrations throughout the country. On Tuesday, Watania 1 aired a segment on the “developments in the security situation in Kasserine,” a 13-minute briefing dominated by interviews with government officials. Imprecise and even inaccurate reporting highlighted the targeting of security forces (focusing on “an attack on a National Guard barrack” and the wounds inflicted upon a security agent) while allotting minimal time to peaceful demonstrators and their demands.

Interior Ministry spokesman Walid Louguini has announced that his department is taking the demands of citizens in Kasserine and other regions seriously and that security operations are being carried out with the utmost restraint. He denied security forces’ excessive use of tear gas to disperse protesters, although photographs indicate otherwise. Speaking with Radio Express FM, Louguini evoked evidence of coordination between certain demonstrators and terrorists. The same fears were voiced by Issam Dardouri, spokesman for one of Tunisia’s numerous police unions, who said that the weapons used recently by terrorist groups could be used again against security forces and expressed doubts regarding the motives of night demonstrations.