Tunisian authorities forcibly relocated them from Choucha to La Marsa’s youth center in June 2017. Nothing has changed 8 months later, and the 34 refugees, most of whose asylum requests were rejected, denounce the State’s neglect and competent organizations’ unwillingness to admit their own mistakes and reexamine the refugees’ claims for international protection. As far as the UNHCR is concerned, the files are closed. In the meantime, what were supposed to be temporary accommodations remain unchanged and living conditions are increasingly worrying. The wait also weighs on the employees of the youth center who, as reported in a press release by the Tunisian Forum for Economic and Social Rights (FTDES), organized a sit-in on January 23 to denounce the authorities’ abandonment of the refugees.

With accommodations in one of the wealthiest neighborhoods in the country, nestled just between the French Ambassador’s residence and the interim headquarters of the French Embassy in Libya, these exiles might have hoped for improved living conditions after six years in a refugee camp in the desert. Instead, they have been reduced to survival and begging. 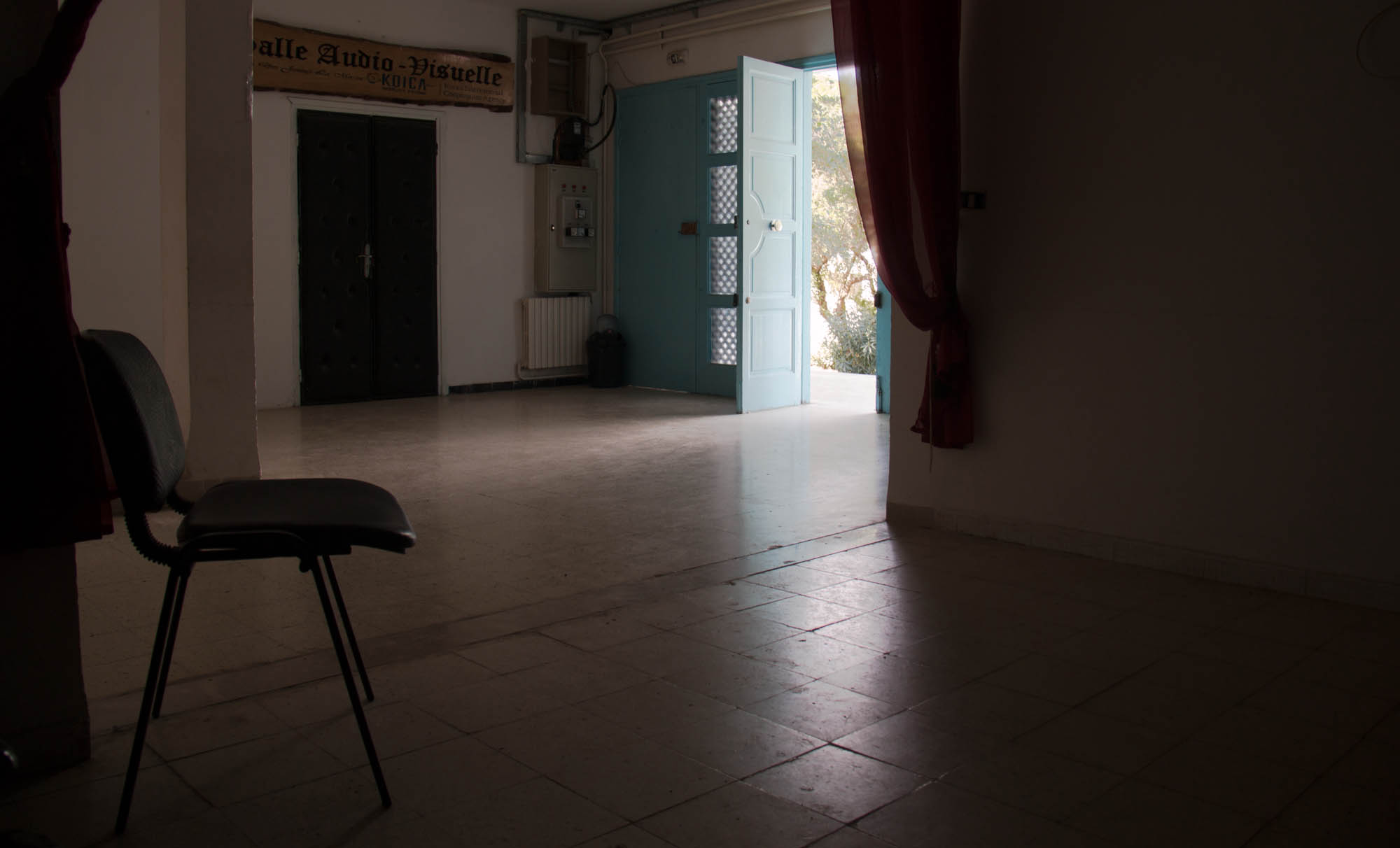 The common room of the youth center, where the refugees spend most of their time.

“We eat twice a week”, remarks Ibrahim, “thanks to the leftovers from the events nearby [in the youth center], and when hostel guests accept to share what they are eating”. The 45-years-old man from Darfur escaped the Libyan armed conflict to be sheltered in Tunisia in 2011. He is one of the 300 rejected claimants, who, according to the UNHCR, were not classified as refugees in Choucha. A decision he has contested ever since. “I did not leave to find a job, but a shelter, a quiet life”, explains Ibrahim, a welder by trade as well as a horse trainer, “I was working in Sudan as well as in Libya, and I had horses. I am just looking for safety”. 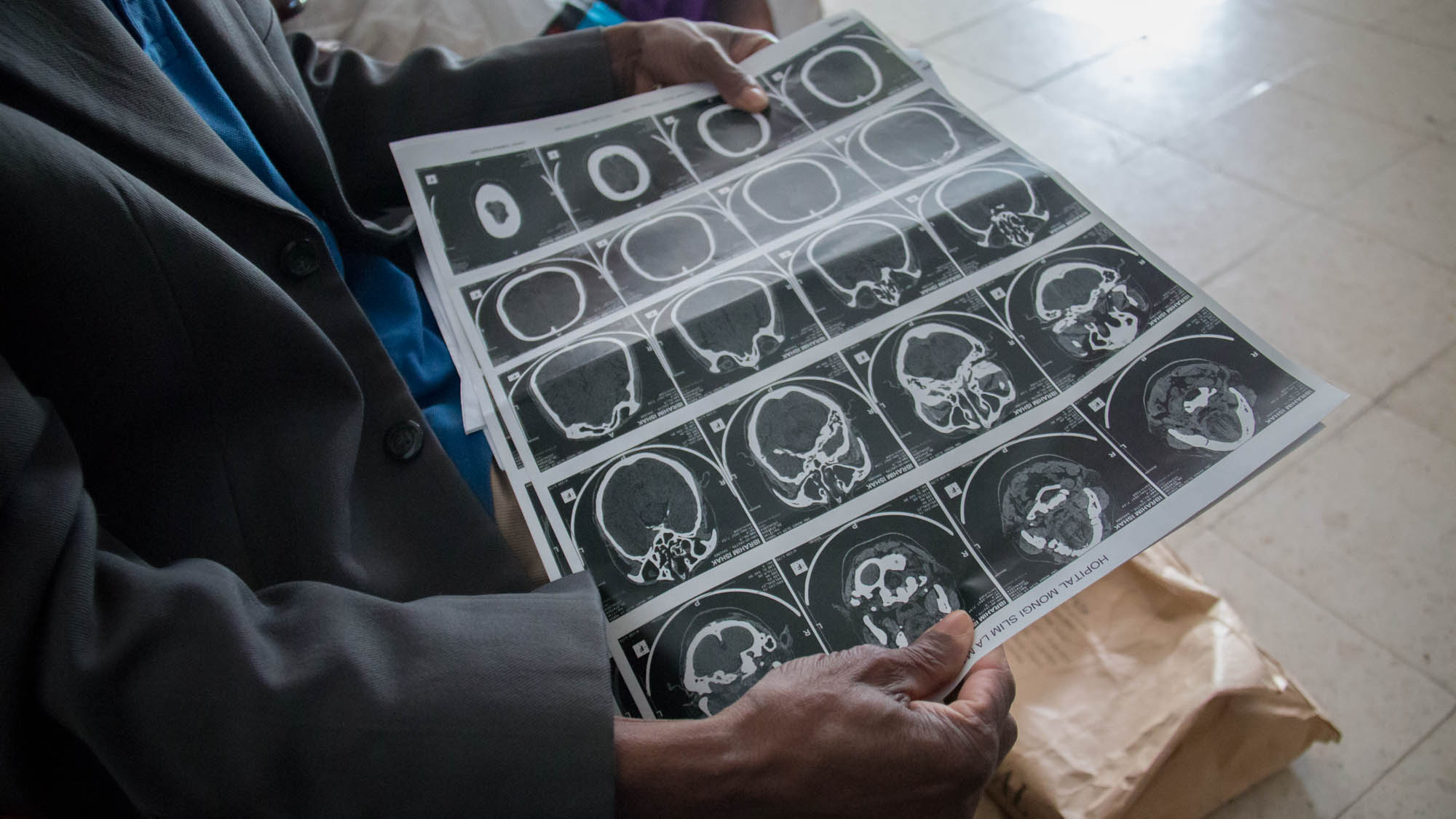 Having undergone three operations in Tunisia, Ibrahim shows the details of his medical record. Among others, he suffers from heart and respiratory problems.

The International Organization for Migrations (IOM) was taking care of most of the group’s basic needs until November 2017, when it suddenly cut off all aid–no more food, no more hygiene products. Meanwhile, Doctors Without Borders, who carried out regular medical checks, completed the term of its mission in Tunisia. Doctors of the World replaced them, but for Ibrahim who suffers from serious health problems and has undergone several operations in Tunisia, the situation is far from resolved. “You can see the exhaustion in their movements, the bitterness on the faces”, says Mohamed, 55 years old, who is also from Darfur. “It is truly difficult to be left here like children… even criminals are fed, and we are innocent”, he laments. 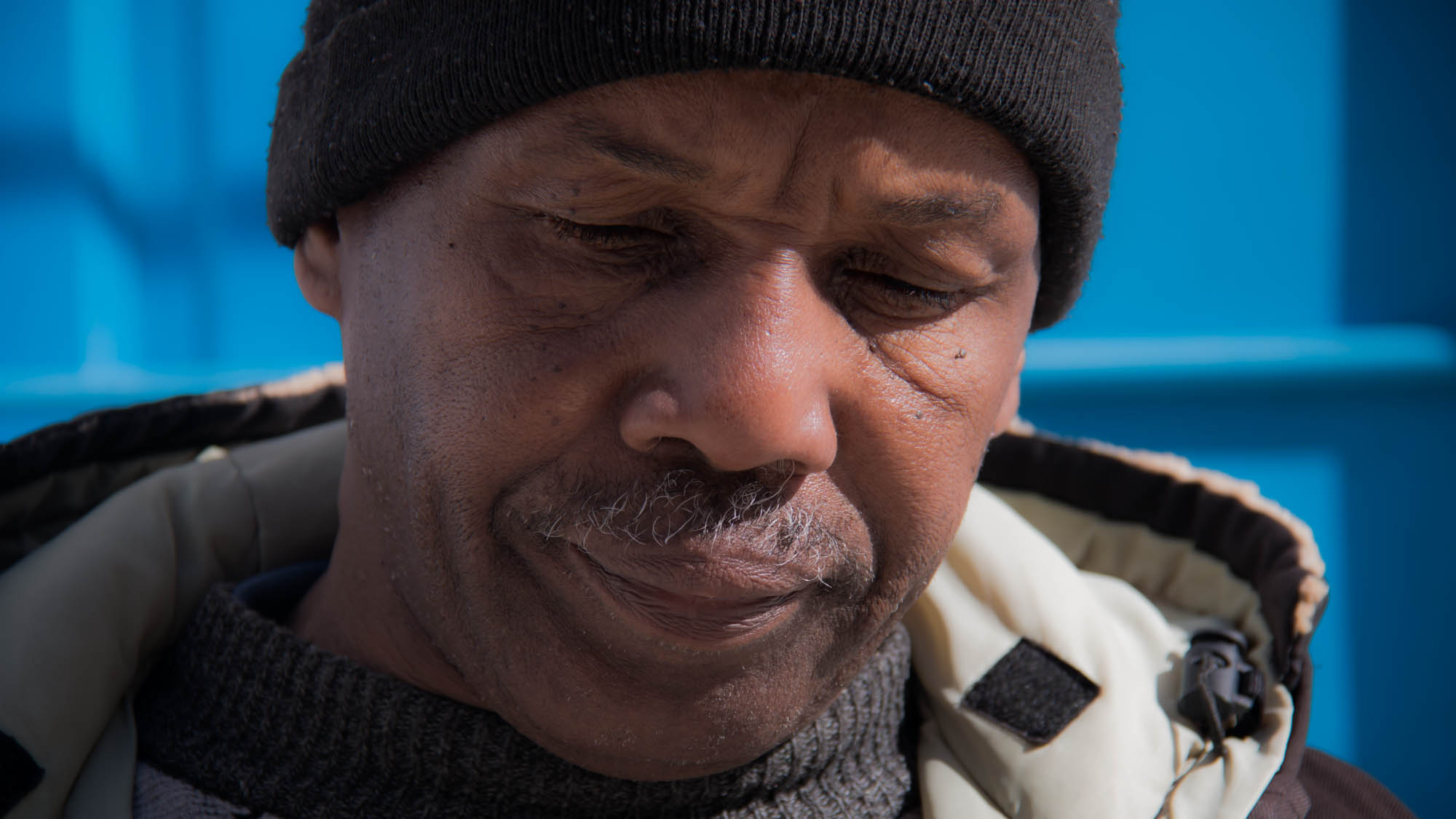 Mohamed fled Darfur 14 years ago. A refugee from the Libyan conflict, Mohamed lives a life on pause in Tunisia, where he has never been able to take up his trade nor obtain news from his family.

Contacted by Nawaat, the IOM head of mission in Tunisia Lorena Lando explains the shutdown of help extended to the refugees by the lack of budget for emergency aid: “A group of 30 people doesn’t justify the allocation of crisis funding that we provide in other countries of the region. Our funds are project-based, but in terms of food for example, Tunisia does not qualify for this type of emergency response”. The Tunisian Red Crescent, which disposes of an official mandate to offer support for the group, also cut all aid three months after the exiles arrived in La Marsa. According to Wajdi Ben Ahmed, the CRT doctor in charge of their case, “it’s the authorities, through the Ministry of Social Affairs, who are currently providing food”. But since these organizations pulled out of the situation, nobody has taken up the lead.

Refugees without status: the responsibility of UNHCR

They were hundreds of thousands to have fled from Libya to Choucha camp in Tunisia in 2011. Among them were many migrant workers who were able to return to their countries of origin. The UNHCR reports having identified 4,500 asylum seekers and refugees, 3,800 of whom were able to start a new life abroad. In La Marsa, 4 individuals obtained this status, but have yet to receive support of any kind, either material, financial or through resettlement programs. The 30 other individuals whose requests for asylum have been rejected, are convinced that mistakes were committed during their interviews with UNHCR protection officers, a position supported by the FTDES since 2012.

We asked Nebil Benbekhti, chief administrator of the UNHCR protection unit in Tunis, about the allegation of such mistakes. He commented that “this remains to be proved, and has not been proved”. Only a few of the 30 contested refusals have been verified by the UNHCR, and this without a serious reexamination in the presence of the concerned individuals who, moreover, have no other options for recourse. The need for international protection is evaluated during the personal interviews, explains Benbekhti, especially in light of “situations in the countries of origin which are often widely notorious. In Choucha for instance, Somalians, Eritreans and Sudanese come from countries known to expel large numbers of refugees, and these are not the countries of origin of people in La Marsa”. But Mohamed is from Darfur in Sudan, where violence had resulted in 2.4 million refugees and over 300,000 deaths at the time he fled. Mohamed does not know the reasons why his request for asylum was denied, but he considers that “there were grave misinterpretations” during his interview. 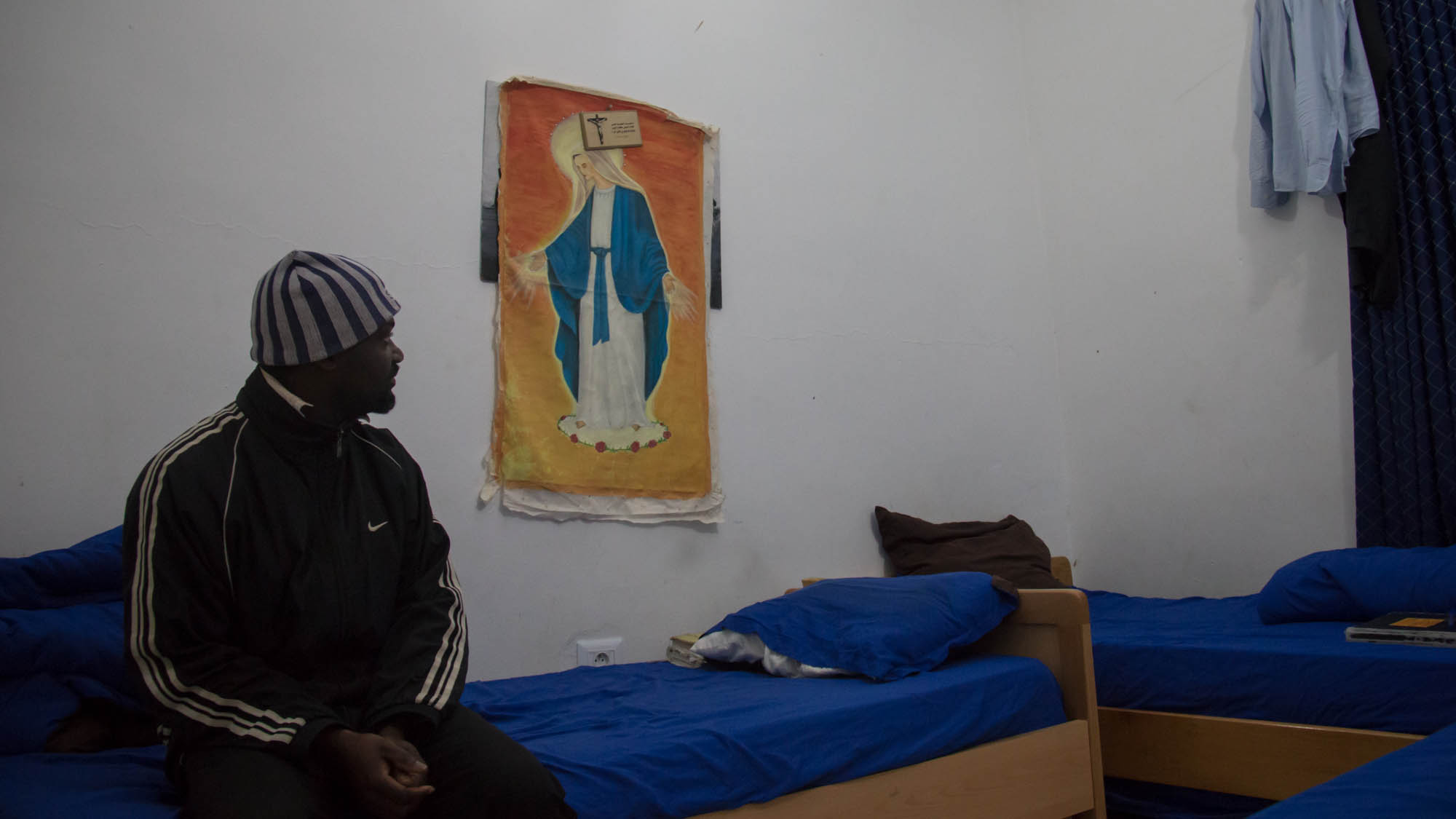 Ikele sits in his bedroom which he shares with Abrousi and Bright, his Nigerian compatriots.

No future without appeal

The options left for the 34 exiles in La Marsa are few. They refuse voluntary return to their home countries, an option offered by the IOM. In the meantime, their personal stories do not qualify them for protection in their countries of origin. The older among them have been living abroad for 15 to 20 years and cannot accept the possibility of returning, even if they are offered support to do so. Local integration, on the other hand, is extremely hard to imagine for this small group, who has known Tunisia only from the perspective of the seven-year deadlock they are living. Many of them evoke the racism they face in the vicinities of the youth center. “We are grateful for what Tunisia has done for us. But we don’t have a future here. We are afraid of going out. After seven years of pain, we just want to leave and have our lives back”, confesses Abdelkader, a 38-year-old Ghanaian, as he points at stones on the ground thrown at the refugees by teenagers from the other side of the boardwalk. 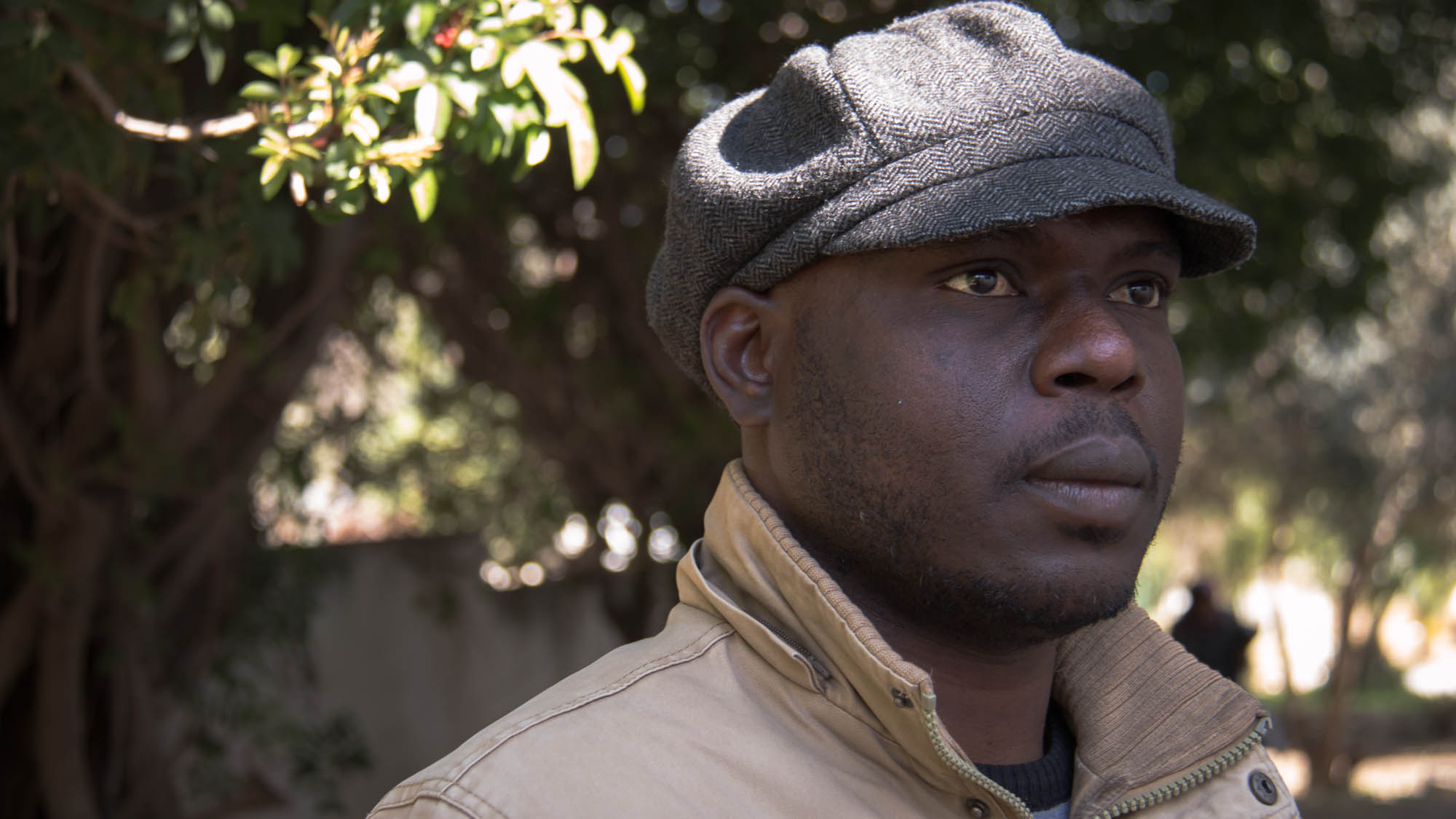 Bright Kelly, a 36-year-old Nigerian, exiled since the age of 15.

“I pray a lot. It gives me hope and keeps me busy”, confides Bright, 36 years old, who left Nigeria when he was 15. Even if their situation appears hopeless, the refugees are determined to be taken into consideration. The UNHCR and the IOM skirt the issue by placing the burden of responsibility on one another, and by insisting on the constraints of their mandates which are “subject to the sovereignty of the State”. Accordingly, they deem that the situation now lies in the hands of Tunisian authorities. But the draft law on asylum has still not been submitted to Tunisia’s parliament, and the 34 refugees do not know if the government will actively address their case through discussions with potential relocation countries, or, alternatively, if current legislative provisions concerning foreigners in Tunisia will be applied, in which case the group will be confronted with a whole new set of difficulties.