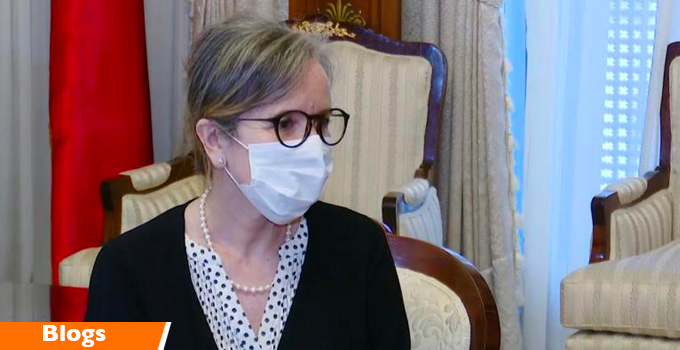 Most of my friends were over the moon and excited about this historic and symbolic nomination, reminding us how glorious and powerful “la femme Tunisienne” is ! And I thought: Here we go again: State feminism is well and alive, even though I thought that by marching in the revolution 10 years ago, we killed the Father, the Patriarch.

I badly needed someone to validate my emotions, so I called my go-to friend for whenever I have political anxiety. My friend was among the very few Tunisians who were extremely unhappy with what happened on July 25th. When I visited him this summer, while we were chilling by the pool, I confessed to him that while it might sound undemocratic, I was actually happy on July 25, and seeing the parliament suspended felt like a relief: it was a natural ending for a failing political class (right, left and anything in between). My position radically shifted on September 22 when, with a presidential decree, our President took and consolidated all powers in his hands leaving the whole country in a complete uncertainty and doubt.

Hence, for me, this “historic, symbolic” September 29 nomination sounds like throwing Tunisian women under the bus! I asked myself: What makes a woman accept such a responsibility knowing that according to the same Decree 117 she could not even choose her ministers? That she will be working with a power-grabbing President who has no roadmap, no timeline, and who communicates essential State matters trough Facebook posts and not even press conferences? I don’t know about Ms. Bouden, but personally I will never accept to work for someone if I don’t have the space and agency to perform. I will not work for someone who doesn’t recognize my full humanity as a woman, and who believes that I have to inherit half of what a man can inherit while paying the full price of my coffee as well as my taxes. I am wondering if Ms. Bouden, before accepting the nomination, was aware of the President’s positions when it comes to LGBTQA++ rights, the death penalty, and his plan to crack down on civil society?

Nominating a woman as Head of Government doesn’t necessarily equate to Saied being progressive. Our President is not the first ruler who will use the women’s card for purposes that will serve his own agenda. Historically, the question of gender was essential to the nationalist movement. “The creation of the new Arab woman was part of the modernity project »[1] yet, that notion of modernity was not negotiated with women themselves. Women were important to the nation-building process yet excluded from it. In order to support a political project of post-independence, modern Tunisia, creating a culture around this political idea was important. Here comes State feminism and the invention of “La Femme Tunisienne”, a hegemonic concept and an invention by post-independence male elite. The myth of Tunisian woman was not a welcoming, inclusive framework but rather an exclusive status that created a gap between women themselves: educated/ uneducated, rural/urban, light skinned/dark skinned, modern/backward, veiled/unveiled, “suri”/“Arbi”[2] francophone/arabophone leading to further practices of exclusion, silence and tokenism among the women themselves. State feminism has never been a liberatory project and always aimed at controlling gender and sexuality, positioning the State as the main patriarch and the one responsible for women’s fate.

While accessing decision-making roles is a right for all women, and I evidently do not question women’s capabilities and agency, I interrogate the obsession of measuring the progress of women’s rights by the number of women at the top. This obviously masks the realities on the ground – and the realities are shocking. A survey done by the FTDES[3] shows that in Monastir governorate, one of the major industrial hubs in Tunisia, more than 42 percent of the female workforce in the textile sector support themselves and entire families, usually made up of five members. Therefore, for a salary of 300 dinars per month on average, the individual income would not exceed 2 dinars per day, which puts this category among the most deprived. This dramatic reality reminds us that while State feminism might have delivered for middle-class women, it did not deliver for all women. This “historic and symbolic” nomination doesn’t mean that all is well for Tunisian women – on the contrary, it reminds us of Laurie Penny’s words: “While we all worry about the glass ceiling, there are millions of women standing in the basement, and the basement is flooding[4].”

Will our first ever woman Head of Government recognize that 40 years of neoliberal economics were built on the backs of working-class and poor women and put economic justice as her highest priority? Will she center gender and class when negotiating reforms imposed by the IMF and the World Bank, as gender and class are usually diluted whenever we talk about the economy? Will she engage in serious reform of the security sector because we women, and especially under dictatorial regimes, are brutalized by the State, terrorized in the streets and beaten in our homes? Would our safety and security be on the agenda?

Will our first ever woman Head of Government pay attention to the devastating effect housework is having on Tunisian women who, according to a UN Women study,[5] spend 10 times more time on social reproduction/life-making activities than men, yet their work remains invisible, unrecognizable and unpaid, defined as love and care rather than work?

While I interrogate symbolism and demand concrete actions, I also recognize that all demands cannot be met within the current system that rests essentially on a politics of domination, and that defying patriarchal political institutions that are male-defined, male-dominated and serve male interests and privileges is the toughest task of all time. I also learned that women leaders in oppressive political and social structures often replicate the same patriarchal oppressive attitudes, and that powerful women don’t necessarily serve the women’s agenda and interests.

Since the revolution, we witnessed how many women in political parties representing all ideologies run for office and get elected under domestic identities as the daughters of, wives of and widows of male political actors. In exchange for gaining little power, those women usually show more loyalty to their political party’s agenda than to the women’s rights agenda. But the question here is, to paraphrase Mona Eltahawy’s: why do women accept the crumbs and don’t ask for the whole cake?

Nominating Ms. Najla Bouden within the current economic, political, institutional and health crisis with the limited power she holds under Decree 117 is equivalent to setting her up for failure, and through this decision, the president is throwing women and women’s political leadership under the bus. The Tunisian people, who have been betrayed by the political elite (and first among them the Islamist party Ennahda), is impatient for change and will hold Ms. Bouden accountable and responsible for all the misery we have been experiencing since 2011.

But if Ms. Bouden is intending to use her new power to make transformational and radical change, then the women and the feminist movement will have her back. Making a change does not rely on one person, it takes people, power and politics. Will our first ever woman Head of Government lead us in an equal and just Tunisia? Will we be “lifting as we climb?”[6]

For now, I am suspicious and angry, and I am fully entitled to my feeling. Not clapping for this nomination doesn’t make me less of a feminist. I learned that I should never give a carte blanche to any power, from the household up to the State, and that my role as a feminist is not putting a man on pedestal the moment he recognizes that I am equal to him. My role is to defy State feminism and push toward a feminism that benefits all women. As rightfully articulated in the book “Feminism for the 99%”: “Feminism for the 99 percent is a restless anti-capitalist feminism, one that can never be satisfied with equivalences until we have equality, never satisfied with legal rights until we have justice, and never satisfied with democracy until individual freedom is calibrated on the basis of freedom for all.”[7]