“If that dump remains there, it will harm the groundwater. And since there is a river there, the pollution will soon reach the sea,” said Mohamed, who works at the training school and spoke on condition of anonymity. “They [officials] keep saying they will figure out a solution, but there’s nothing.” 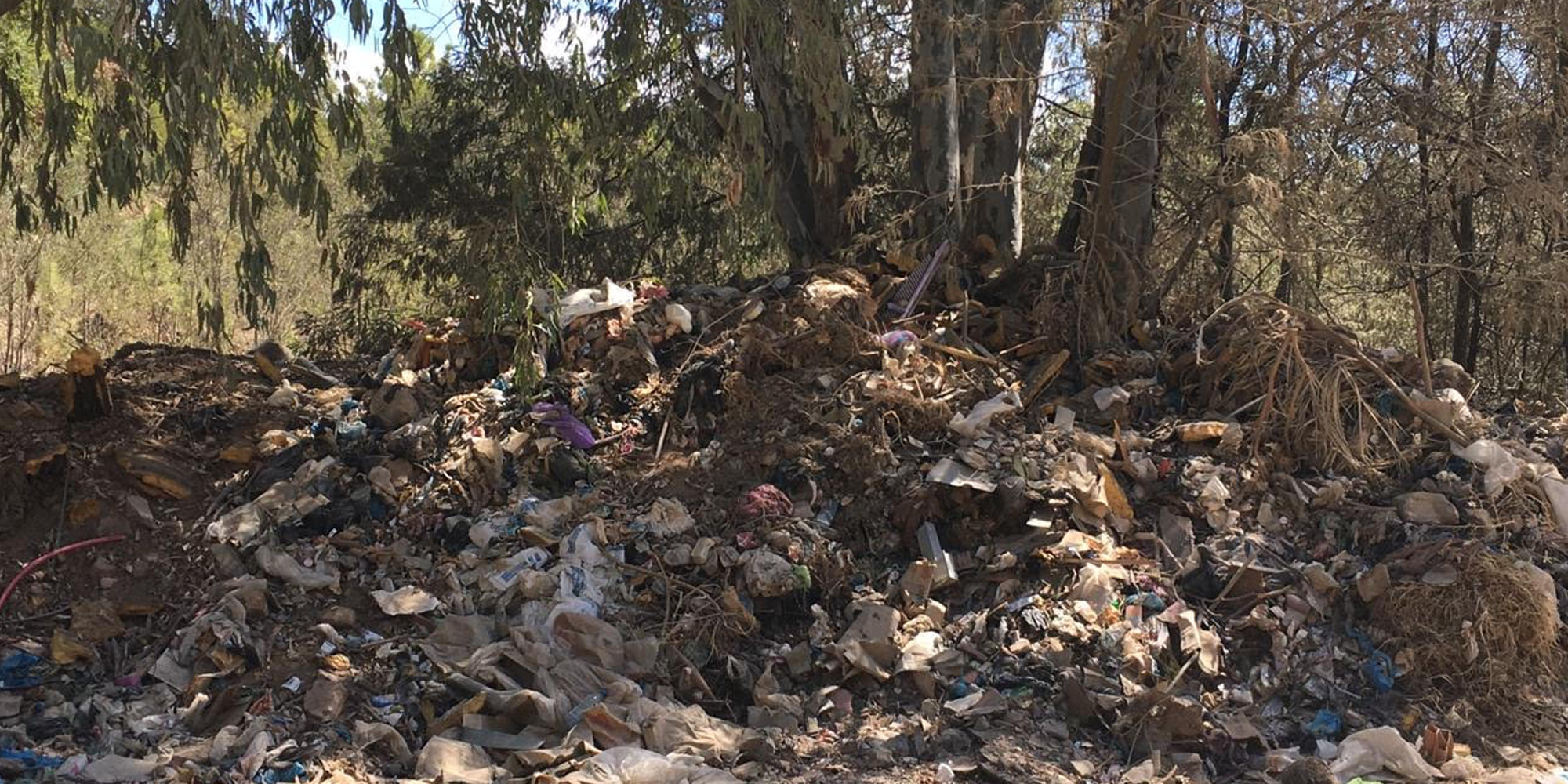 The dump is located in a neighborhood housing about 60 families known by locals as “Grenoble,” which is situated in the Houamdia district. The pollution from the dump is one more grievance locals have towards authorities, who they see as failing to provide public services, including especially water and electricity.

In this place, people live two meters away from the dam and [yet] they don’t have access to drinking water… what do you want them to do to get themselves heard? Either you block the road or set yourself on fire,
Mohamed told Meshkal/Nawaat.

“Wild animals, such as pigs and wolves, now come closer to residential areas and some go to dumps on the road to look for food. Nowadays, we no longer see some bird species for instance because of the pollution issue,” said Sami Khadairia, a local activist and a temporary public sector worker under the hadhira employment system. “We are a touristic region and we don’t [even] have trash cans on our beaches.”

On February 15, 2020, health workers at the hospital, led by their local union branch, organized a demonstration in front of the health facility “protesting the catastrophic working conditions they have to endure due to the foul smells and smoke coming from dump and suffocating the area,” according to one Facebook post on a Tabarka community message board.

Local residents have also protested the placement of the dump by blocking the national highway number 7 (GP7), which connects Tabarka and the capital Tunis, on several occasions. They say they did so to compel authorities to do something about the dump. In March this year, they blocked the road again, and several were detained but later released.

We wanted to have a sit-in but they threatened to put all youth in jail,
said Ridha Houaidi, resident of the “Grenoble” neighborhood.

After the detention of protesters this spring, governor Ali Marmouri of Jendouba offered general promises to address their concerns, local residentsand one municipal council member said. However they said no changes have been made to the dump so far.

“They kept saying that they will be figuring out a solution, but heavyweight trucks carrying waste keep going back and forth up to three times a day,” said Jezia, who owns and manages a small sandwich shop near the hospital.

A History of Polluting and Protests

This is not the first time Tabarkans have protested pollution caused by state infrastructure schemes.

According to Moncef Houaidi, a local of the Houaidia district of Tabarka who Nawaat interviewed in July, the state had given a stone quarry company multiple permissions to continue using and working state land. However, this caused the contamination of underground water—the sole source of drinking water and irrigation for crops in Houaidia, prompting local farmers to join the protest. 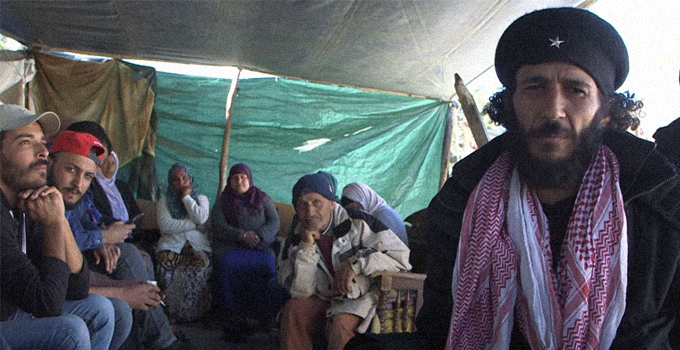 These circumstances led to a sit-in that began in December 2019, with residents of the district demanding the complete closure of the factory and compensation. When officials did not respond to these demands, locals blocked quarry trucks from accessing the area, and some even took their protest to the capital in Tunis as well. Several protesters have since received judicial summons relating to their allegedly illegal entry onto the quarry, according to one report.

Locals have filed lawsuit against the quarry, and they are currently waiting for a court to hear their case, with a court hearing initially set initially for October 13, 2020 but postponed to November 25, according to Houaidi. 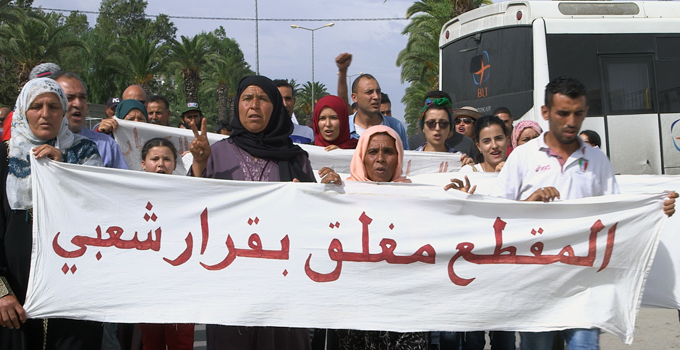 Among the promises made by local authorities has been that they would bring in a German company to help solve the waste issue.

“During the last protest, the [Jendouba] governor [Ali Marmouri] talked to the residents of the region about the partnership with the German company and told them that it would be providing the region of Tabarka with new job opportunities for its residents,” Sana Jemai, the Deputy Mayor of the Tabarka Municipal Council told Meshkal/Nawaat. Mayors and deputy mayors are elected members of the municipal council, selected through internal council elections.

Jemai added that locals halted their protests because they “were convinced by his [Marmouri’s] promises.”But many local residents told Meshkal/Nawaat that they were skeptical about the governor’s response.

They kept tempting us with how they will be giving us jobs through this [German] company…but we do not care about jobs, we care about our health,
said local resident Ridha Houaidi.

According to a statement on the official Facebook page of Tabarka Municipality, a council meeting was held on February 20, 2020 which addressed this issue. The meeting determined that the cause of the hazardous health repercussions of the Tabarka dump was due to “the failure to respect the health criteria put in place to monitor haphazard waste dumping areas.” 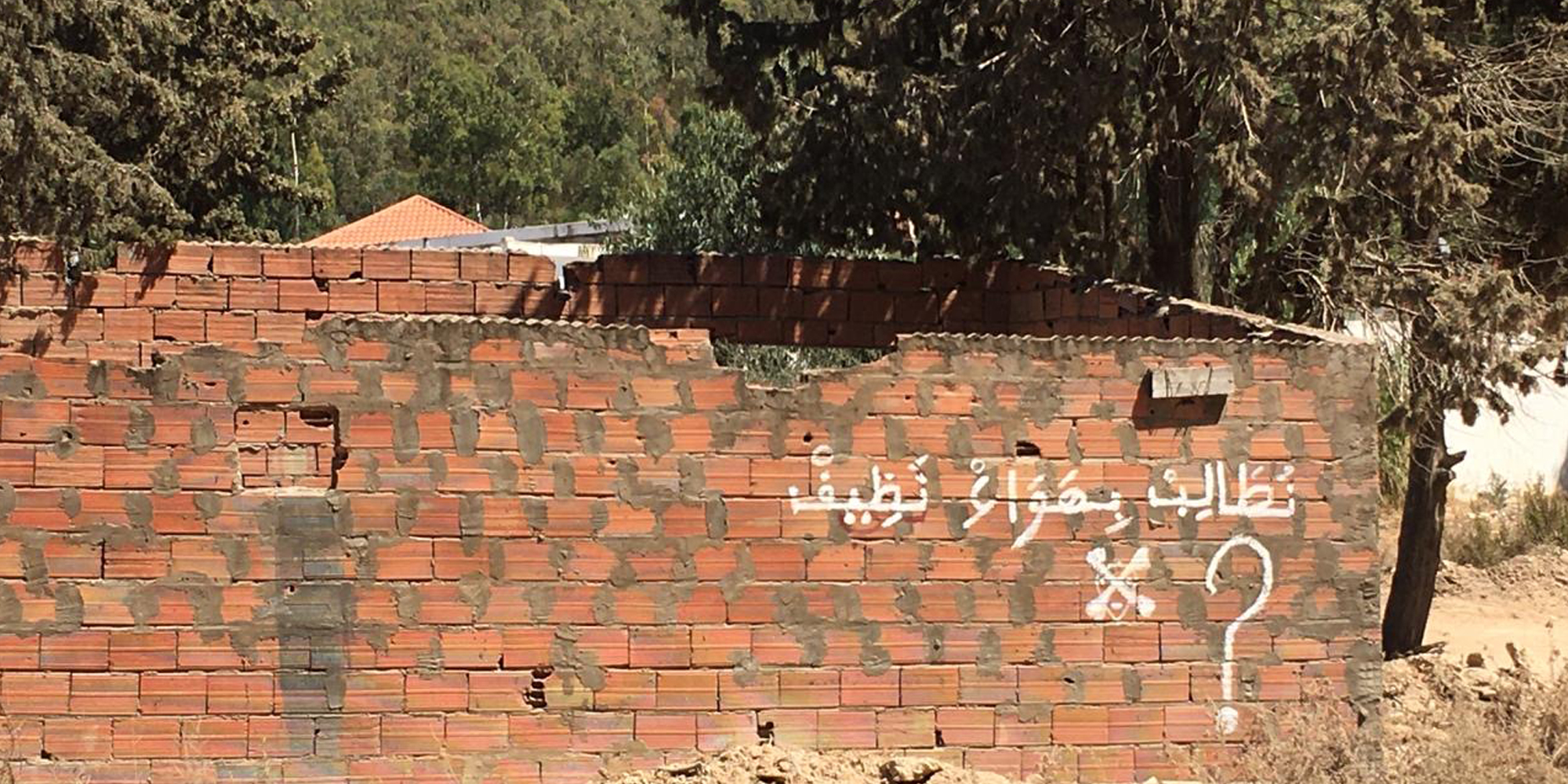 The same statement did not assign responsibility or blame for such failure, but did announce that the Germany recycling company would visit Tabarka for meetings on February 27, 2020. However, that visitwas postponed for seven months due to Covid-19, according to deputy mayor Sana Jemai.

Delays due to Virus, Politics, or Lobbying?

Jemai said the German company finally made the visit this September to start the process of establishing two recycling sites which would cover Tabarka, Sidi Hssin and another city in Siliana. This plan, however, would need a minimum of five years to be functional and would not result in changing the site of the dump, Jemai said.

Jemai did not name the company but said it was a public one operating in Bavaria and clarified that an agreement had been signed between the company and the Tunisian State’s waste disposal agency ANGed.

Apart from the delays from Covid-19 and long-term planning schemes, Khadairia pointed to delays coming from political disagreement within the municipality among its different members who are from opposing political parties. Internal disputes within the municipal council were so fierce that in August the mayor (and council president) Abdallah Rjeibi of the independent party list “Voice of Tabarka” submitted his resignation as both mayor and councilmember. However, Rjeibi’s resignation was not accepted by governor Marmouri, and Rjeibi resumed his mayoral duties in early September.

Apart from blaming party politics for delays, Khadairia also claimed that private interests are trying to influence the work of the council, and he accused the council of corruption.

They keep saying that it costs them money to move the dump to another area… but all they want is to steal and ‘to hell’ with the citizen,
said Khadairia.

Khadairia did not show any evidence to Meshkal/Nawaat to back up his allegations,but he said he and other activists had reached out to the National Anti-Corruption Authority [INLUCC by its French acronym] detailing their accusations against the council, focusing largely on the council’s unresponsiveness to citizen demands. They also sent petitions to the governor’s office in Jendouba.

Managing or Moving the Dump

Deputy Mayor Jemai explained that the previous city dump was moved to its current location in 2015 for several reasons:the former city dump was also on national road 7 but closer to Tabarka’s entrance—an unsightly location for the many tourists who visit; also, the previous location was found to have been on top of an important groundwater location that was classified as part of “national water resources…so there was no question about its closure and removal from that area,” Jemai told Meshkal/Nawaat.

Local officials then decided on the current area for the dump partly because it has road access, which municipality waste trucks can use, and also because a bigger space was needed to meet the needs of Tabarka’s growing population, according to deputy mayor Jemai.

However, when moving the dump location in 2015, the terms and conditions set by the state’s Forestry Administration were not respected, according to Jemai, who was elected to the council in 2018. The Forestry Administration later demanded that this newly elected municipal council review and implements some of the basic regulations for managing the dump, especially the regulation requiring the building a water cistern near the dump, as cisterns areneeded to put out any fires that might break out in the dump.

This regulation is particularly significant given that locals say fires have broken out at the dump on several occasions, and there are photographs posted to social media showing such fire breakouts.

The dump also lacks a proper drainage system coordinated with the National Sanitation Office [ONAS by its French acronym]. Such a drainage system is a key infrastructure feature for safely routing leaks of combustible gases which might otherwise leak into the surrounding forest and harm the rich local fauna and flora.

Locals have called for the dump to be moved once again to a new location, but there is a problem of finding one with road access. According to Khadairia, “there’s an alternative area to have the dump but there’s no built road to reach it,” adding that poor infrastructure in the region is due to regional biases that exclude some regions, like Jendouba, from development funding and investment.

“They always bring us the same road contractors that keep making the same mistakes and build the same bad roads and every time no one gets punished, with total impunity taking over”, Khadairia claimed.