“I was trying to prevent one cop from assaulting Ahmed Zarrouki, stating he was a journalist, but I was told to mind my own business. And then another cop who had three stars on his uniform and seemed like a superior came back and slapped me in the face, knocking off my glasses…they kept pushing and hitting me as I was trying to take my glasses off the ground,” said Kmar Ezzamen Khaldi, who was one of the people who tried to gather for the demonstration in front of the Municipal Theater on Habib Bourguiba Avenue on Wednesday.

I was lucky that my glasses did not break in my eyes, otherwise I would have lost my sight,

she said, adding that she plans to file a lawsuit. 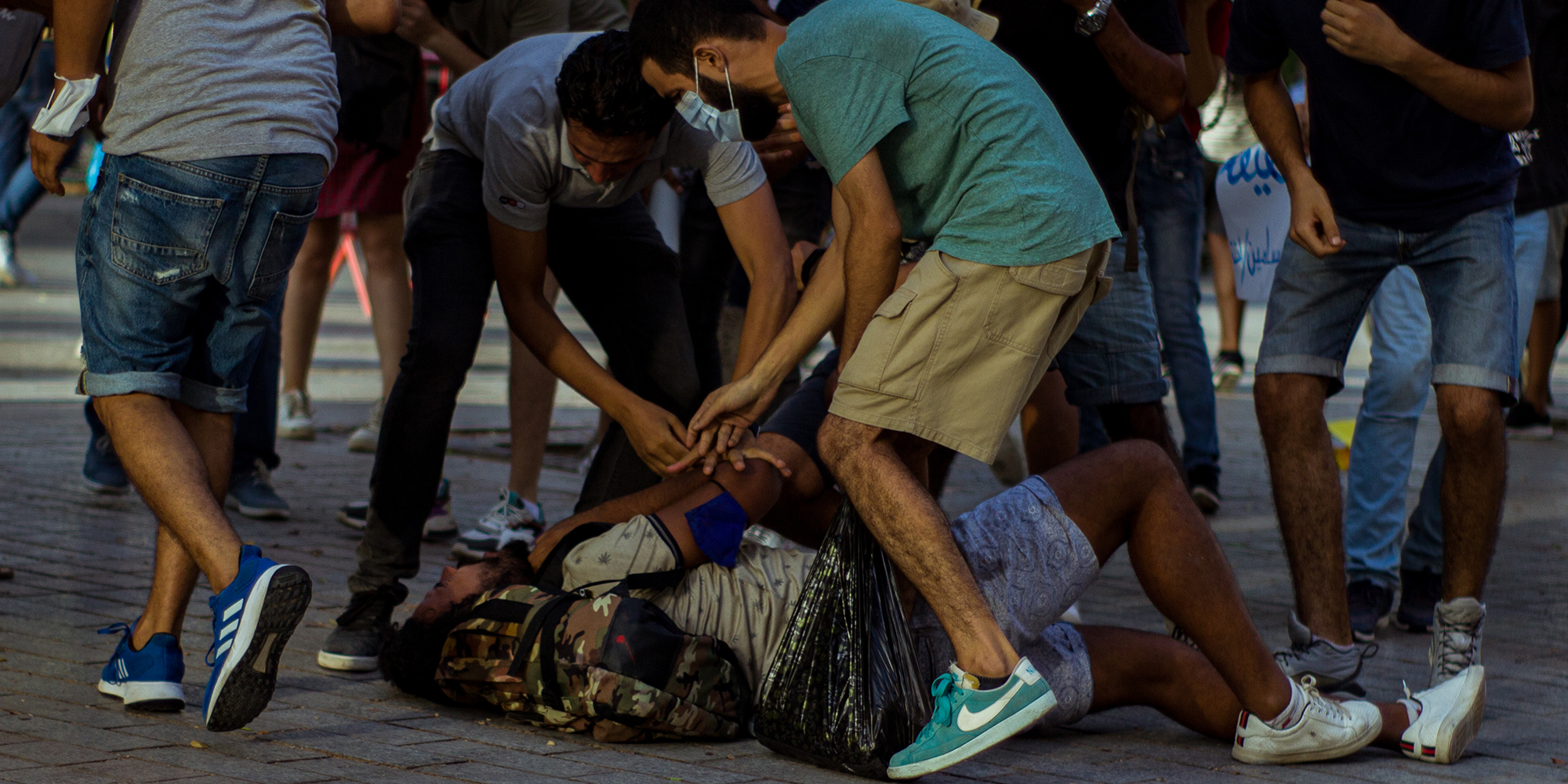 The newly-launched collective movement “Manech Msalmin” [I do not give up] organized Wednesday’s demonstration, publicizing it online three days earlier. The demonstration called for reopening the investigation into the 2013 political assassinations of opposition politicians Chokri Belaid and Mohamed Brahmi and the alleged facilitation by some authorities of Tunisian jihadi fighters travelling to Syria during that period.

We gathered because we believe that what happened on July 25 could be a step towards reform and through which we can put pressure. For us being in the street today to put pressure regarding critical files, such as the file of political assassinations, is very important for the justice system to become effective,

A similar demonstration by another group calling for reopening the investigation into the 2013 assassinations occurred in the morning downtown on September 1, but that demonstration did not encounter police repression. That demonstration has been held weekly for years, organized by leftist political parties. 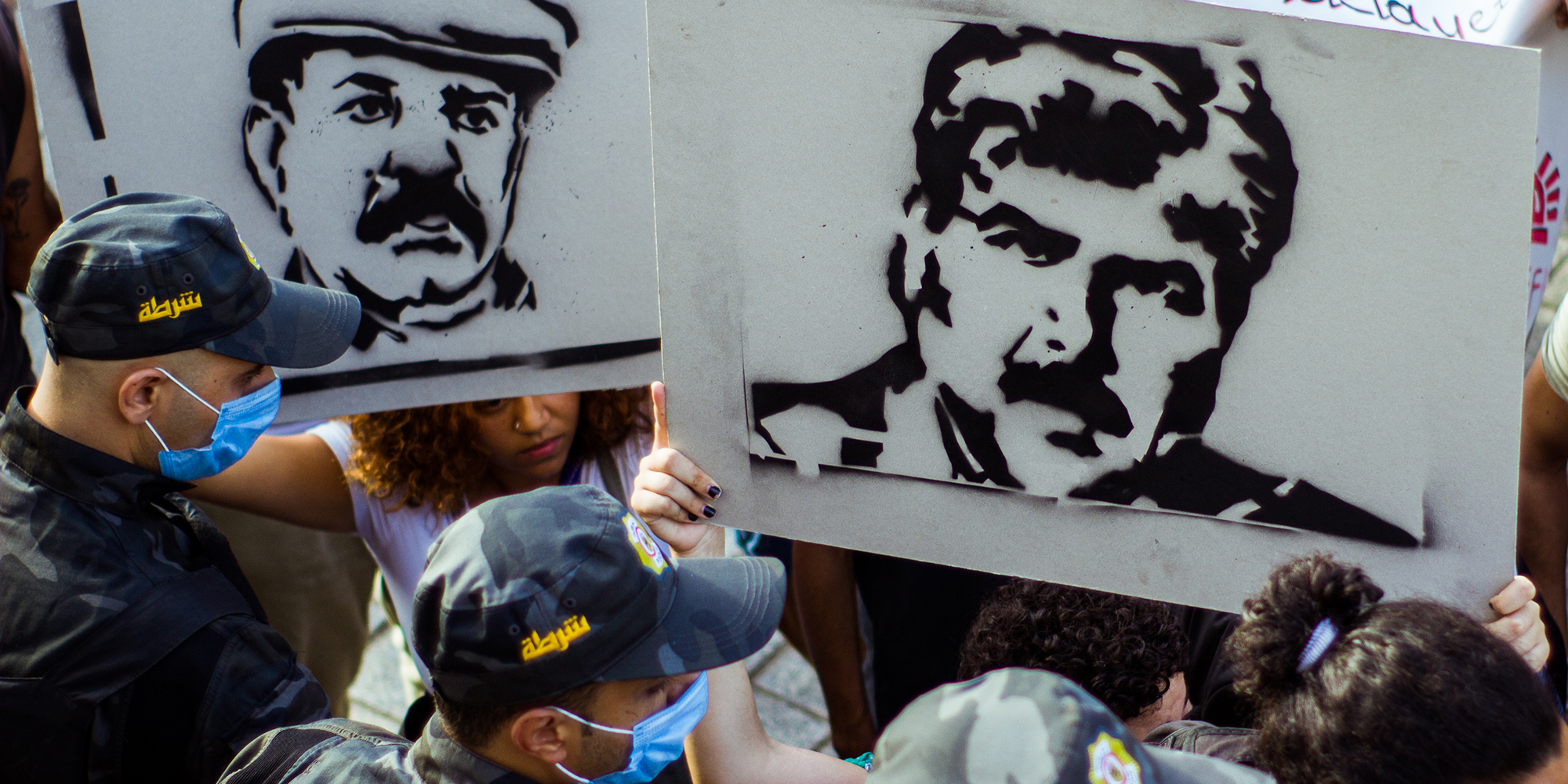 When demonstrators tried to gather in front of the National Theater on Wednesday, uniformed police barred them from doing so. Officer Lotfi Belaid, who identified himself as the Head of the Tunis Police Division, told the demonstration’s organizers that the “demonstration is unauthorized”. When protesters refused to leave the area, police officers gathered on the stairs of the Municipal Theatre and called for more back up.

Protesters initially chanted “Alive, alive, Chokri is Alive… Alive, alive, Brahmi is Alive,” but after police used pepper spray on some demonstrators, they included the chant: “Down with Police Repression, Down with State Terrorism.” Shortly after this chant, police assaulted the demonstrators and journalists present, despite journalists showing their credentials. Meshkal/Nawaat witnessed at least two people who were pepper-sprayed at close range. Oussema Dhahri, one of the demonstrators pepper-sprayed, fell instantly to the ground. 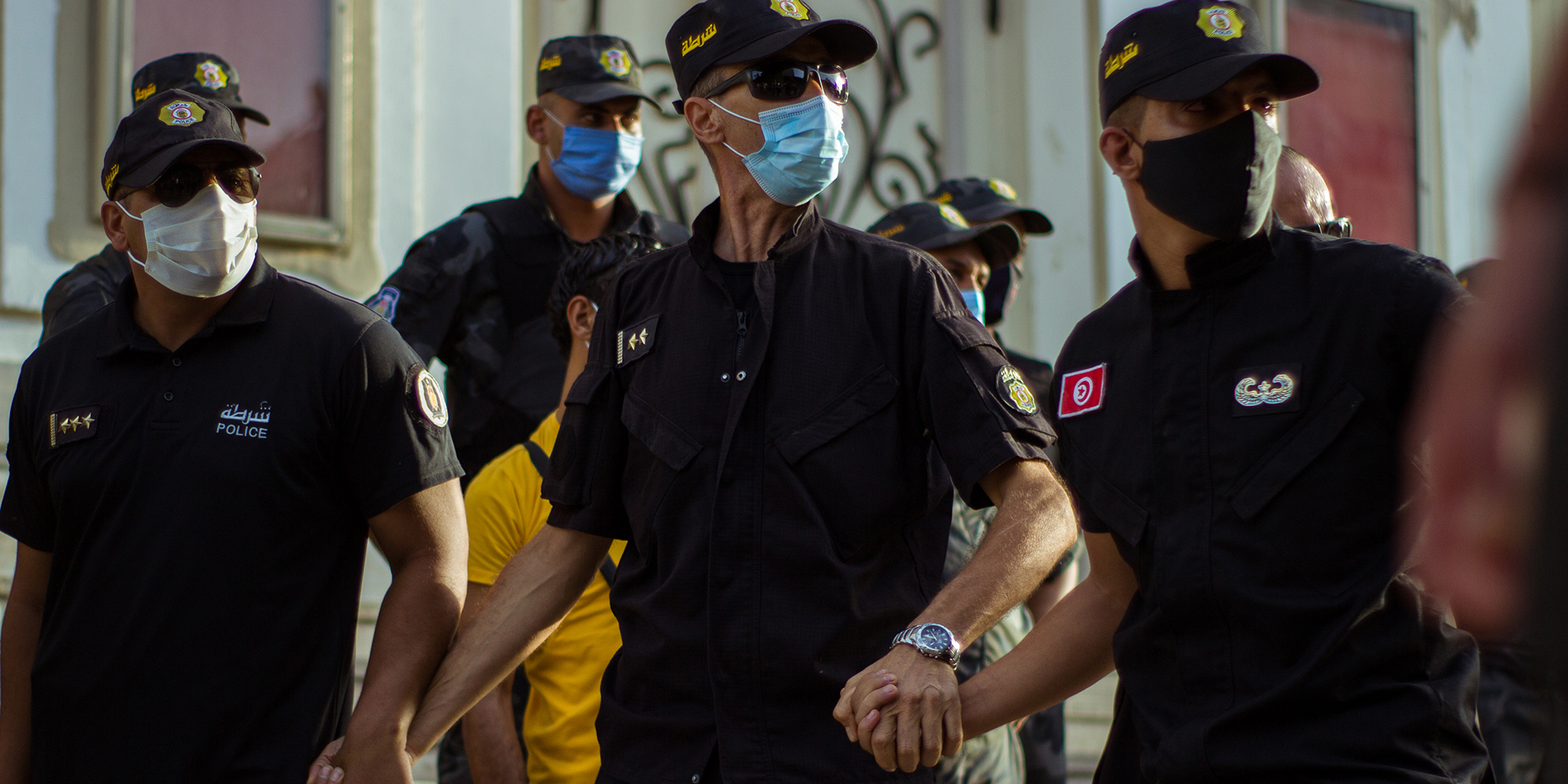 Police also physically assaulted several journalists, including myself as I was pushed, then punched in the chest and stomach by several officers before being thrown to the floor by one officer. Yosra Chikhaoui, a journalist from the online media outlet “Hakaek online” said that she was pushed and assaulted on multiple occasions despite showing proof of being a member press and wearing a press jacket.

We kept saying that we are journalists, but the harassment continued…At one point a police officer pulled me up aggressively in the air and if I did not scream for him to put me down I could have broken my ankle,

Manech Msalmin has since expressed in a statement its condemnation of the violence which it described as “the police repression of protesters and journalists, which represents a dangerous indication of the tendency towards tyranny and the suppression of freedom of demonstration.” 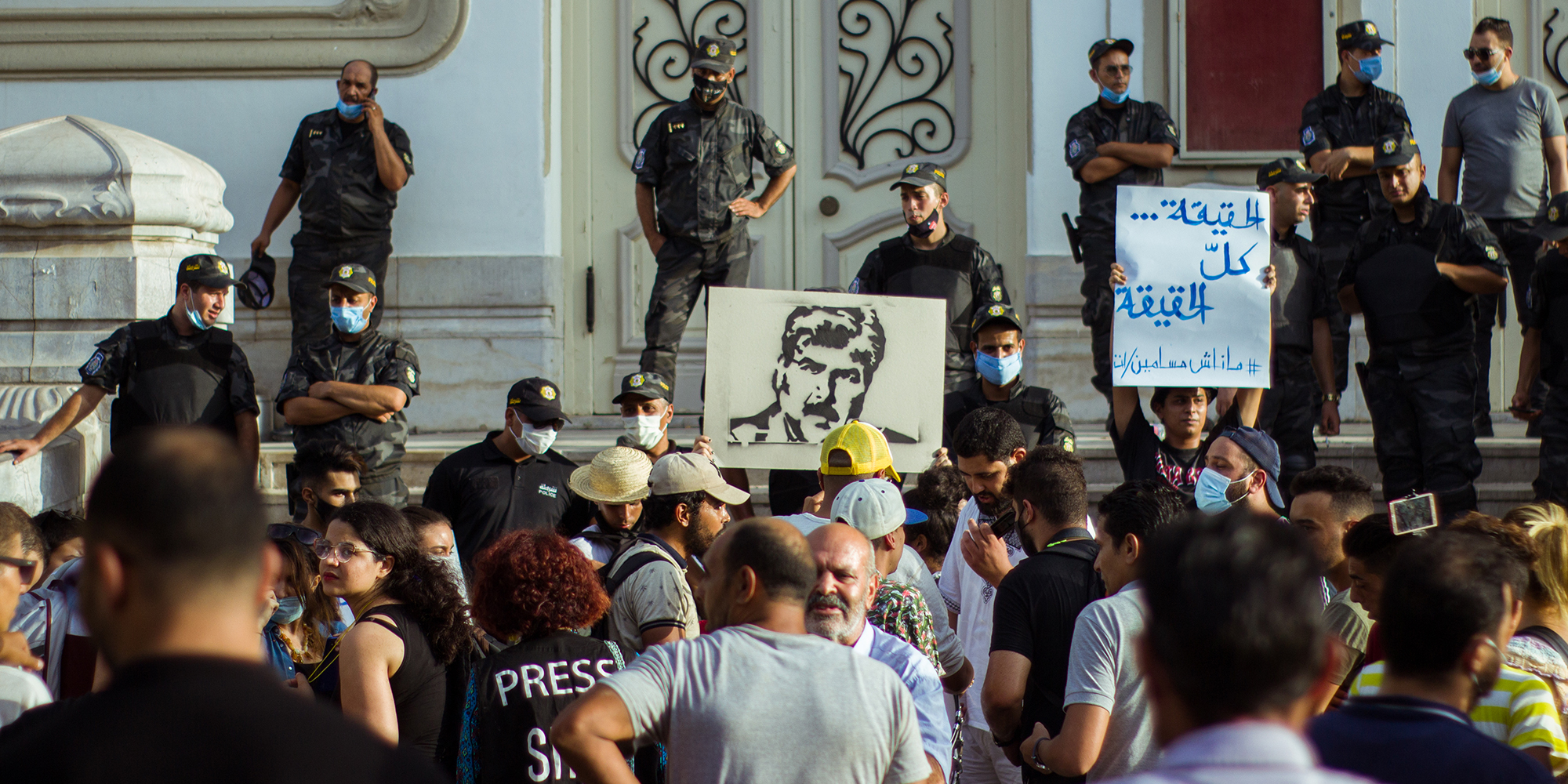 The National Union of Tunisian Journalists (SNJT) has also condemned the use of force by the police against journalists and protestors alike in a statement.

Presidency Seems to Weigh In

The Head of State gave instructions on the necessity to behave towards demonstrators within a framework determined by law and committing to respecting the rights of citizens to peaceful demonstration and freedom of expression, 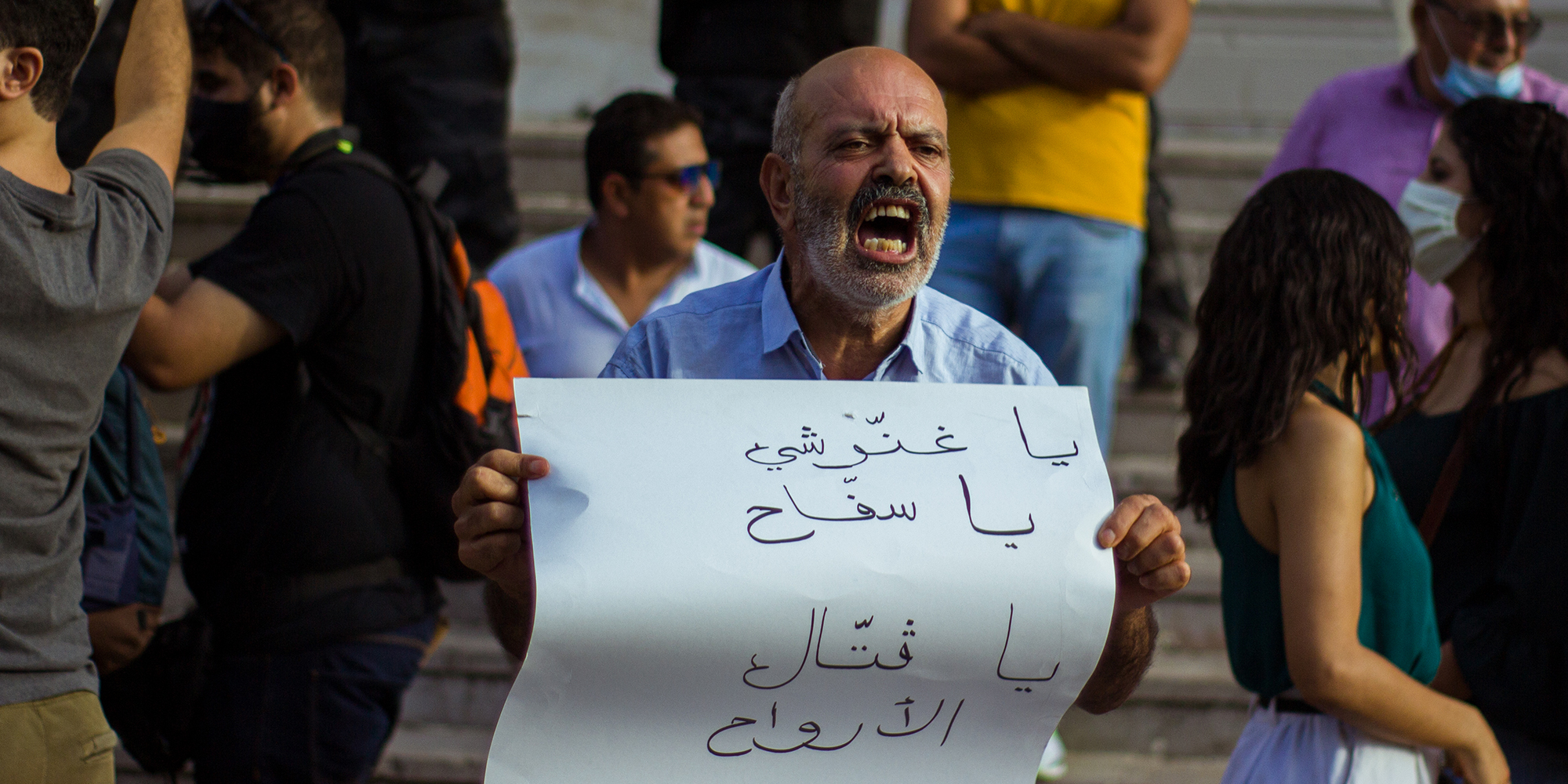 While some of the demonstrators from Manech Msalmin have hopes that President Kais Saied will listen to their demands, the Presidency’s Thursday statement did not go far enough according to many of them discussing it on the movement’s Facebook page.

“Saied was present at the Mahmoud Materi hospital after the assassination of [Mohamed] Brahmi and declared that the system was the one responsible for what happened… so as Manech Msalmin we’re asking for a clarification [about what happened],” Sarra Brahmi, a representative of Manech Msalmin and the daughter of Mohamed Brahmi told Meshkal/Nawaat.