“Constitution, Freedom, National Dignity,” demonstrators chanted on Sunday, a variation of the 2011 revolutionary slogan “Work, Freedom, National Dignity”. Other chants included “Saied Dégage,” “No to Coup, Yes to Rule of Law,” and more anti-Saied slogans accusing him of being “an agent of France” and of committing “treason.” The number of demonstrators peaked at about 3000 around noon. 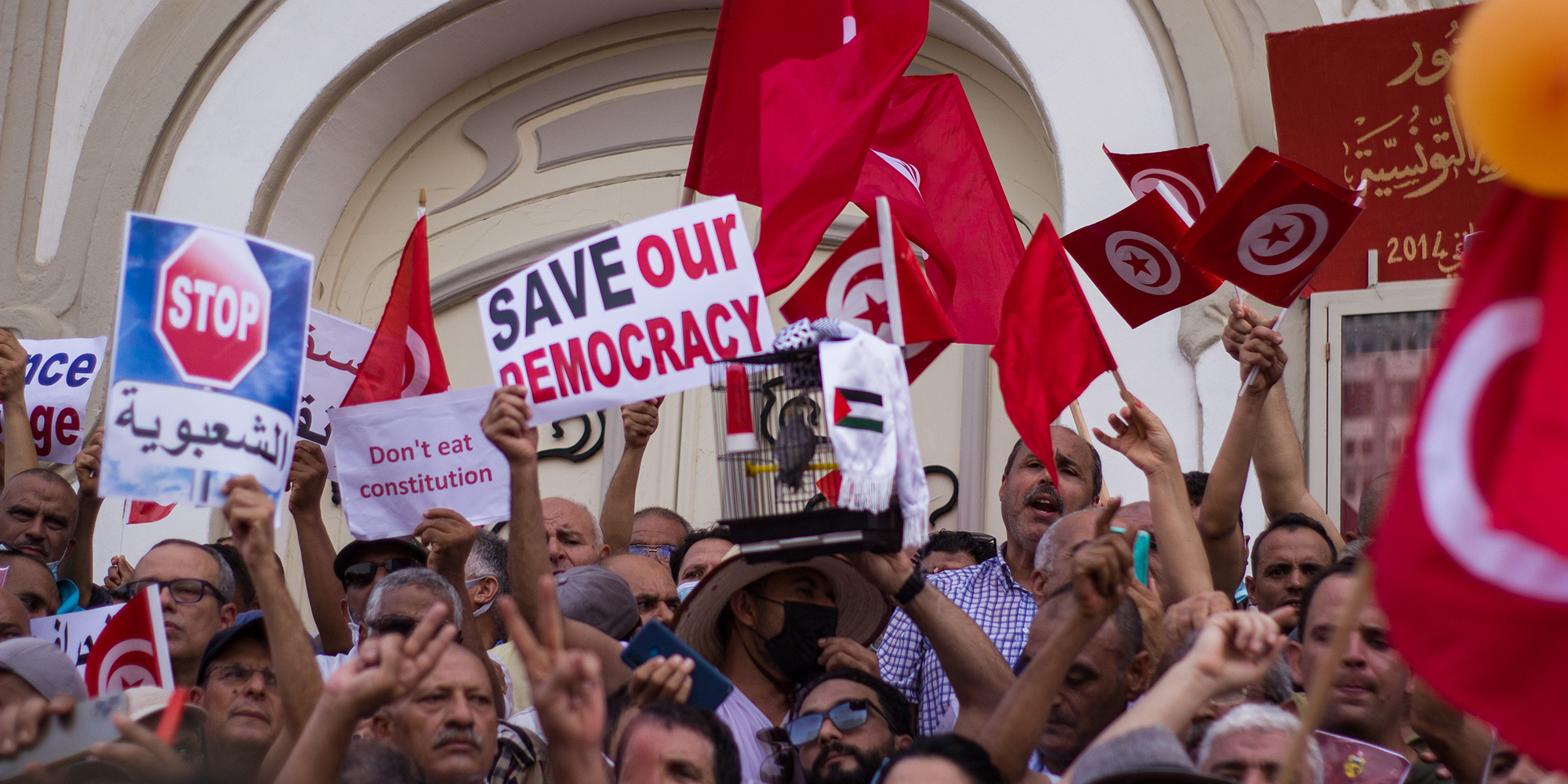 Sunday’s demonstration came after a call by former Tunisian president Moncef Marzouki on his official Facebook page as well as by a Facebook page called “Citizens Against the Coup.”

It is the second large public demonstration against President Kais Saied, following a much smaller one on Saturday, September 18, and it came one day after a small group of self-proclaimed Saied supporters burned copies of Tunisia’s constitution at the same location (President Kais Saied’s brother Naoufel called into question whether those burning the copies were actually supporters). 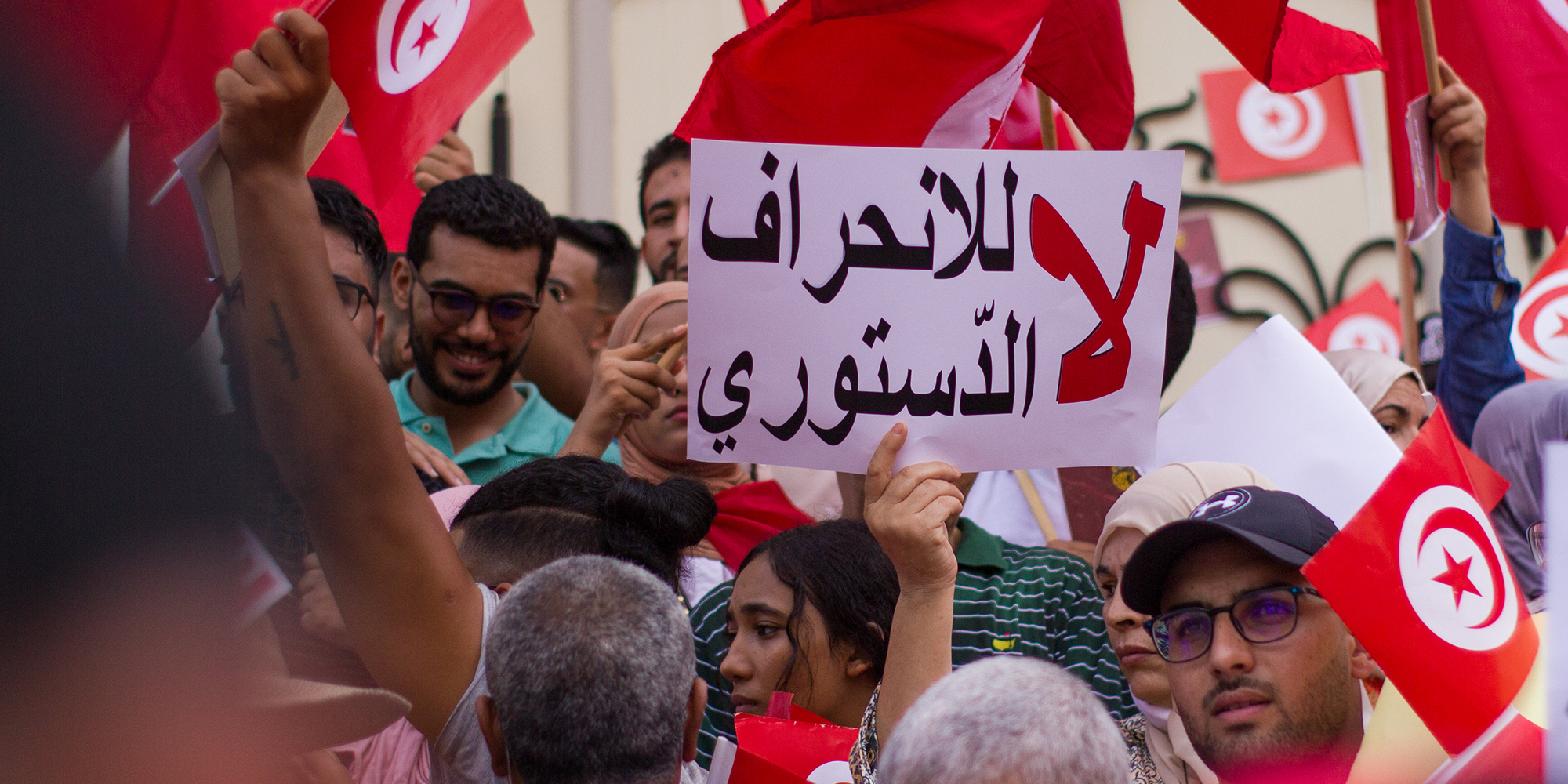 President Kais Saied indicated via presidential order number 117, issued on September 22, that he will be amending the 2014 constitution with the help of a committee; the order also suspended all parts of the constitution that are not in conformity with his exceptional measures except for the preamble and Chapter One on General Principles and Chapter Two on rights and freedoms. Critics have pointed out that the order prevents any checks or challenges to President Saied’s rule from other state institutions and have called the move unconstitutional.

“Imagine seeing someone burn the constitution of a state. What do you expect from them [Saied’s supporters]?” Hamza Rached, 35, told Meshkal/Nawaat. “How do you expect a citizen to respect the law when the Head of State did not,” Rached told Meshkal in front of the National Theater on Sunday. A small group of counter-protesters supporting President Kais Saied also gathered on Sunday across the street. 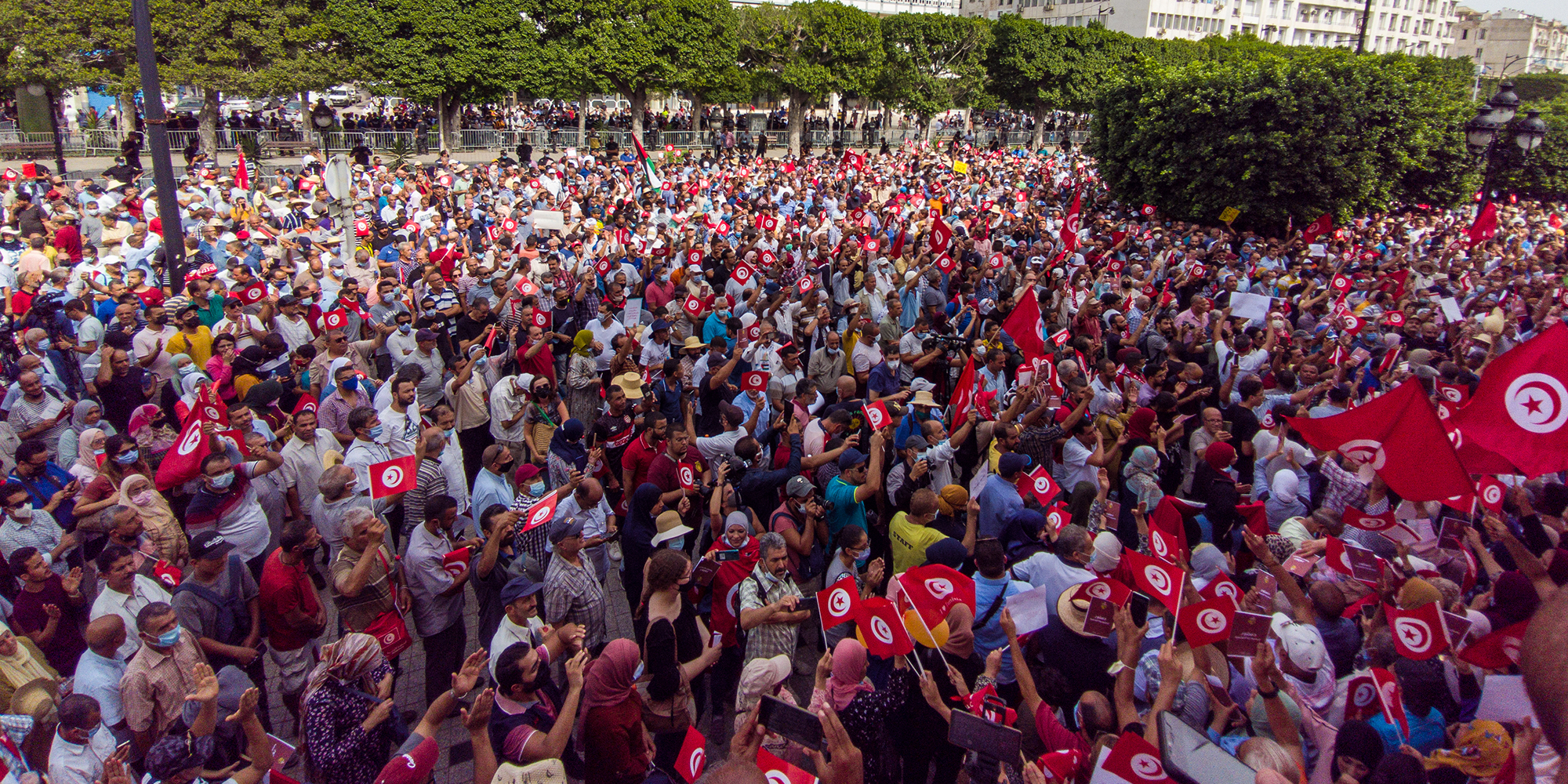 Although Sunday’s demonstrators did not display party logos and slogans, many were supporters or members of political parties that were in the ruling coalition in Parliament, especially Ennahdha and the Dignity Coalition. President Kais Saied suspended parliament on July 25 after invoking article 80 of the constitution. 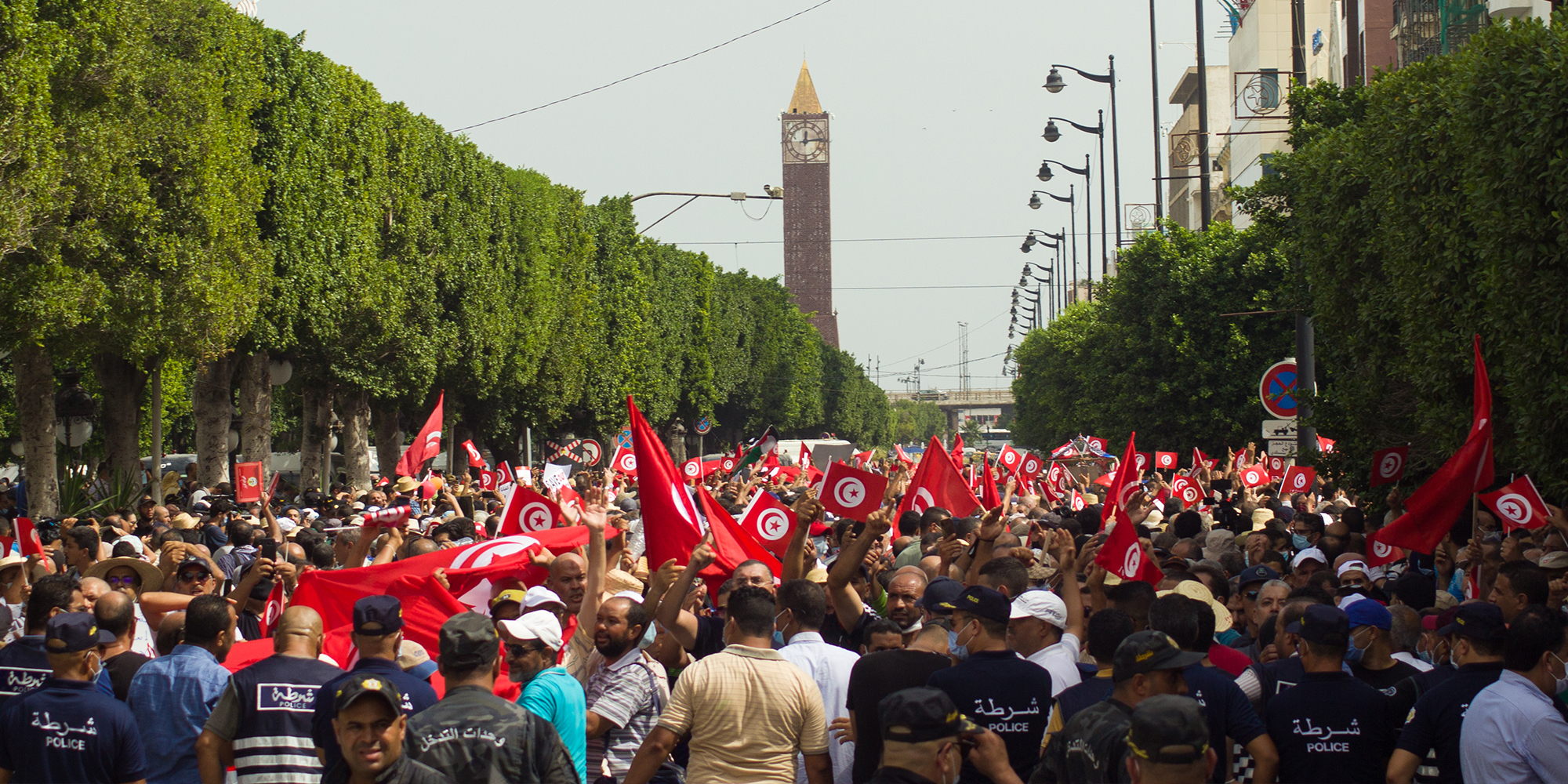 Samira Marzouk and Houda Marzouk, two sisters from the working class neighborhood of Ibn Khaldoun who identified themselves as members of Ennahda parties, also joined the demonstration. They said they fear a return to the political repression Ennahdha members felt prior to 2011. 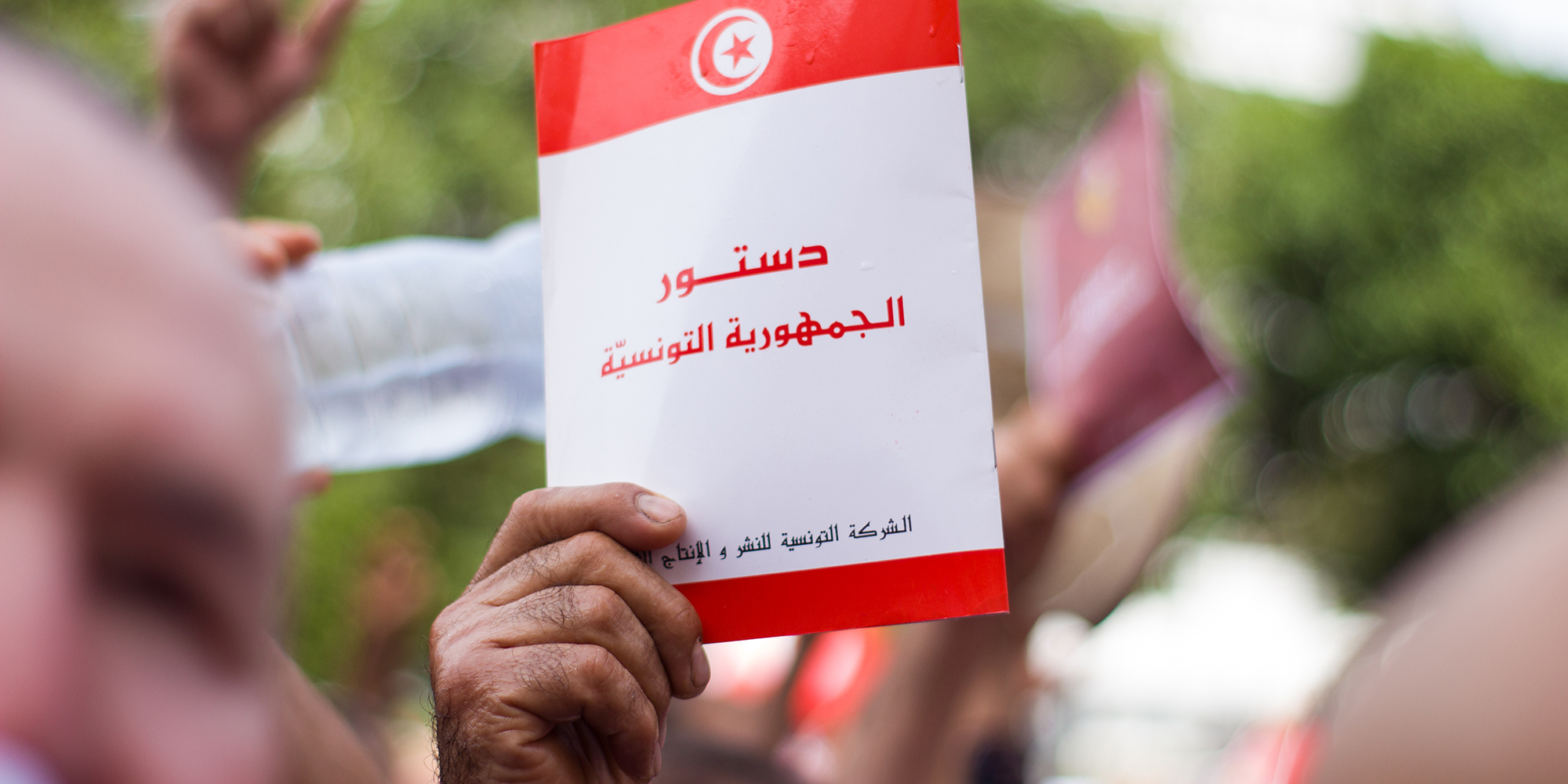 Some of those at the demonstration claimed they voted for Saied in the 2019 presidential election. “He betrayed us!” said 50 year-old demonstrator Samia Boucetta, who said she voted for Saied and even campaigned for him. For Boucetta, Saied’s moves to change the constitution and to suspend it exceptionally are particularly worrying. “The constitution of 2014 was written with the blood of martyrs…It was written with the different constituencies of the population, from right to left. He became a president with that constitution…He needs to maintain his dignity and respect the people!,” Boucetta told Meshkal/Nawaat.

Rached also said he had initially supported Saied. “He is laughing at us and thinks we are stupid. I was one of those who took people to vote for him, I regret it badly…I will not vote for him again,” Rached said. He claimed that prosecution and arrests of high officials since Saied’s July 25 decisions have only targeted those who criticize France, and several demonstrators chanted anti-France slogans on Sunday. 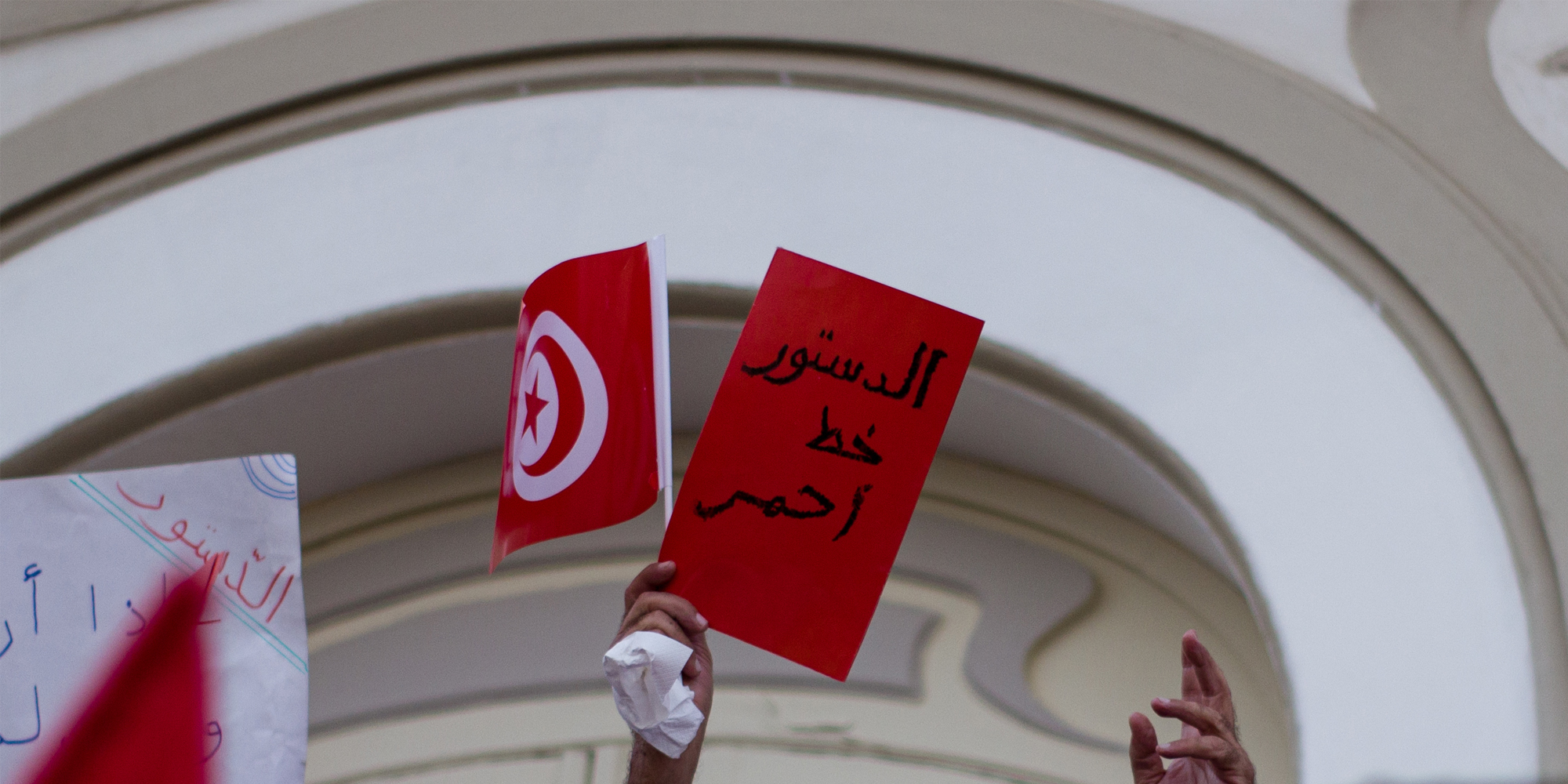 Some of the popular support Saied’s July 25 decisions have enjoyed from other sectors of Tunisian society seem to focus on his promises to fight corruption. However demonstrators on Sunday said they don’t believe him given the lack of results since July 25th. “We no longer know who is behind him. He has become very mysterious and every time he goes out [to speak], he only keeps threatening…Why did I put my finger in ink and vote for him? I thought he was going to fight corruption…Give me an example of one corrupt figure he put in jail. No one!”, demonstrator Boucetta told Meshkal/Nawaat.

Ahmed, 32, who declined to give his real name for professional reasons, told Meshkal/Nawaat on the sidelines of the protest that Saied is “lying to himself” if he thinks he will be able to find solutions for corruption all by himself. “Corruption is a very intricate subject. It is something for all of us to work together to solve. He does not have a magic stick to make it suddenly disappear,” said Ahmed.

15-year-old middle school student, Sirine Bakouch, who joined the protest from El Mourouj 5, said she initially supported Saied’s July 25 decisions. However, she said following his September 22 presidential order suspending the parts of the constitution that go against his exceptional measures, President Saied has lost her support. “I thought that his intention was to fight corruption and clean the parliament. I did not think he would reach the point where he will remove the constitution entirely,” Bakouch told Meshkal/Nawaat in the middle of a chanting crowd in front of the National Theater.

Ahmed feels that Saied has lost what legitimacy he once had, and that if he wants support for his program, he should start a party and win in parliamentary elections. “Kais Saied needs to understand that he does not represent the people. My goal is for him to either resign starting tomorrow, or make a roadmap that takes back to rule of law…meaning the need to get back to a parliamentary system, in that case we can have early [parliamentary] elections,” Ahmed told Meshkal/Nawaat. 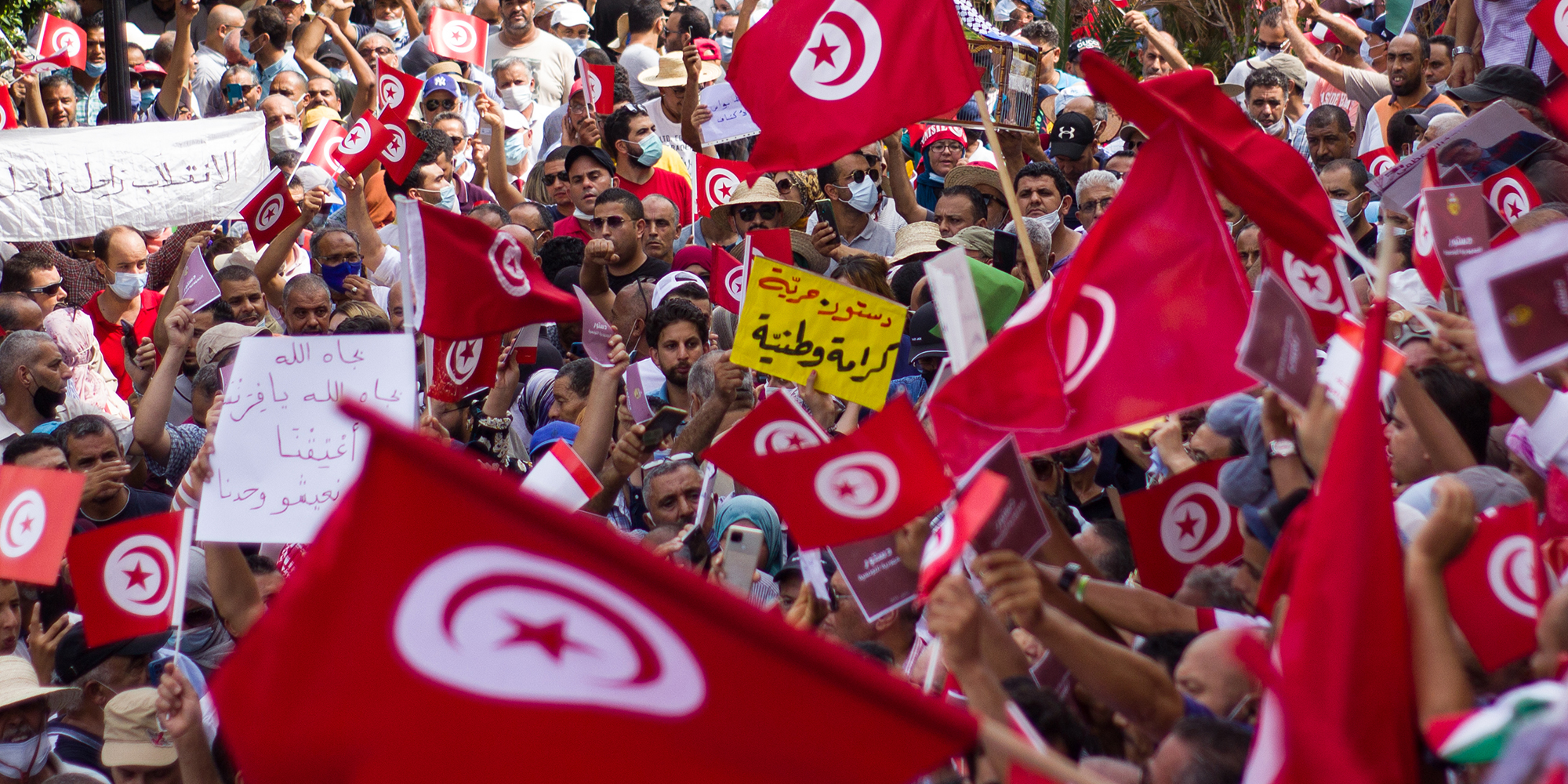 Around 14:00 pm on Sunday, Saied supporters gathered in a counterprotest across the street from the original demonstration. The pro-Saied group gathered only about 50 people, less than the 100-150 who gathered to counterprotest on September 18.

“I am with him [Saied] of course. As long as he took the decision to fight corruption, I am with him… I have faith in him because he is someone we know and we used to see in the Avenue [Habib Bourguiba]. He is a clean person and has clean hands. He is a person living among the people and feels for their struggles, while these people [anti-coup protesters] are living in their ivory tower,” Moufida Bouaziz, who identified herself as a teacher, told Meshkal/Nawaat on the sidelines of the pro-Saied demonstration.

Bouaziz said she doesn’t think fear over Saied permanently keeping all power to himself is warranted because “the people” will always stand up to him. In the event he does keep power to himself, Bouaziz said that “the people can always respond…But so far we have faith.” As for those protesting against Saied on Sunday, Bouaziz saw them as partisan supporters who profited from being in power in recent years.

“These people [anti-Saied protesters] are a bunch of opportunists. They have been stealing from the country for 11 years. They did not build a street, a bridge or a school. They destroyed the educational system. The citizen is eating from trash while they have their own cars and privileges,” she said.

But for Ennahdha member and anti-Saied demonstrator Samira Marzouk, “whatever Ennahda did does not justify what he [Saied] did.”

This article was produced as part of a reporting partnership between Meshkal and Nawaat.