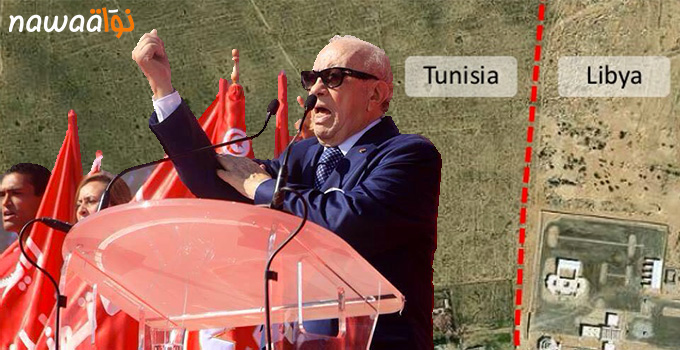 Around mid-July, everyone, it seemed, was talking about the wall, a trench-lined sand barricade that is to stretch some 200 kilometers along Tunisia’s border with Libya. In the capital, a world away from the country’s borders, conversations are still based on hear-say, rumors, and speculation. Approbation, uncertainty, suspicion…the sentiments provoked have been varied, though many remain generally baffled at the belated unveiling and precipitous construction of the government’s latest counterterrorism mechanism, a wall between Tunisia and its neighbor to the south-east.

Several days after the President announced a state of emergency, the Prime Minister indicated that work was underway to secure Tunisia’s border with Libya, the source of terrorism and the smuggling of arms as the current administration is apt to convey. In a televised interview on July 8, Habib Essid referred to the rugged terrain—desert, sand dunes, mountains— and distance—more than 500 kilometers—which render border protection so difficult.

Now, since the events on 18 March in Bardo1, we have begun protecting our borders … In collaboration with the military, we have begun to build a barrier [along] … the region between Ras Ajdeer and Dhiba, some 160 kilometers…a wall—a barrier, a trench…We have already begun the work…

According to Essid, the Ministry of National Defense has engaged six or seven large construction companies to complete the project, estimated to cost 150 million dinars, by the end of the year. The work comprises two phases: construction, currently underway, and the subsequent installation of electronic surveillance equipment.

On July 11, the Ministry of National Defense reported that the wall would be extended 40 kilometers and surpass the Dhiba checkpoint. According to the report, ten kilometers of the barrier—comprised of a wall of sand bags lined with a 2 meter-deep trench as well as check points—had already been completed (by July 11), the entire process overseen by the Ministries of Defense, Equipment, and Industry and precipitated by the collaboration of nine “private developers.” On a visit to inspect the work underway in Ben Guerdane, Minister of Defense Farhat Horchani, accompanied by the Ministers of Agriculture, Equipment, and Industry, explained that the barrier would serve to reduce arms trafficking that thrives in the area, that the project will help to «protect Tunisia from contraband and terrorism and to secure borders».

The unilateral decision—apparently neither parliament was addressed nor a tenders process held for contract companies to undertake the construction–has been denounced by the government in Tripoli, while many Libyans at the border suspect that the wall is the Tunisian government’s attempt to appropriate oil wells.2 If some Tunisians are comforted by the idea of a (partially) closed border, others find fault with a strategy that entails divisive initiatives as opposed to promoting collaborative efforts with neighboring countries to address border issues. Articles, political cartoons, and comments posted online emphasize that a material barrier is not a solution to a complex and multi-dimensional problem whose root causes span a gamut of social, economic, political, and psychological factors that are by no means delimited by border lines.

Closed border, closed politics
A lack of clarity regarding the elaborations, interests, and decision-makers that have shaped the project renders stronger the symbolic effect of the wall, which many see as the epitome of unaccountable and ineffective politics. Unable or unwilling to address and much less admit to underlying internal issues, the current administration has yet to present concrete socio-economic initiatives for the country and meanwhile continues to advance a message of national unity which appears increasingly hollow and … exclusive.

The wall already under construction along the border with Libya will only exacerbate the poverty and marginalization of populations in the south-east at a moment when the « national » economy is facing extraordinary difficulties and is still awaiting a serious and ambitious project to be elaborated with concerted effort and implemented immediately. It is indeed the most urgent of our needs, more so even than the fight against terrorism which we foment through our disastrous non-politics. The Wall at the Tunisian-Libyan Border and its Dangers, Habib Ayeb.

Nawaat spoke with Ayeb, native to the south-east of Tunisia, about the implications of the wall in places like Ben Guerdane where cross-border networks constitute the livelihood and family ties of local populations. From this point of view, the wall is seen as an instrument playing at internal politics, a mechanism to diffuse disparate messages to Tunisians in the north and south of the country. Having declared a state of emergency, the government has set a tone of urgency and prodded fears of a constant and imminent threat with which the unceremonious and hasty construction of a barrier appears to be in measure. For those living in the border area, the obstructed flow of commerce (which comprises far more than the trafficking of weapons that serve the objectives of terrorists) carries an entirely different message, a sort of ultimatum: «either you are with us or against us…in either case it is the State that controls the country’s borders–and by extension that which sustains you».

In the north-west of the country, contraband and terrorism apparently don’t bother the government so much. People in the north, as opposed to people in the south, voted for Nidaa Tounes. This decision is punishment for inhabitants of the south, to further impoverish them and prevent them from doing business with the neighboring country.

Commerce at the borders, Ayeb says with certainty, will continue. Inhabitants will find a way around the physical barrier, perhaps find alternative trade routes or other trade partners at the Algerian border. He explains that marginalization and stigmatization push people to organize locally to come up with their own solutions, to circumvent conventions and regulations to create their own norms and rules, their own commerce, their own mechanisms of protection.

Indeed, it is unlikely that any of the country’s inhabitants or regions (north, south, or anywhere in between) will find much protection from a sand wall. Whatever tactics might be devised and employed to protect the country from external threats—weapons, terrorism, chaos—shall be ill-conceived and only partially effective so long as these measures overlook the realities and issues within Tunisia’s borders that are sustaining causes of terrorism and violence.

2. Nawaat spoke with a specialist in mediation and conflict resolution who shared his impressions with us after returning from a visit to the border; in the interest of his work, he has preferred to remain anonymous.

3. Habib Ayeb is also professor of geography at the Université Paris 8, France.